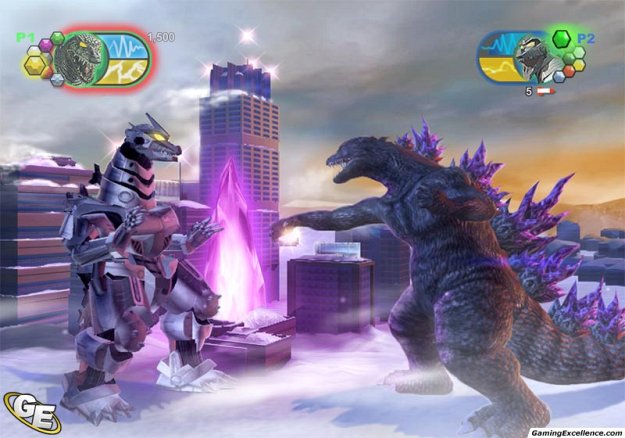 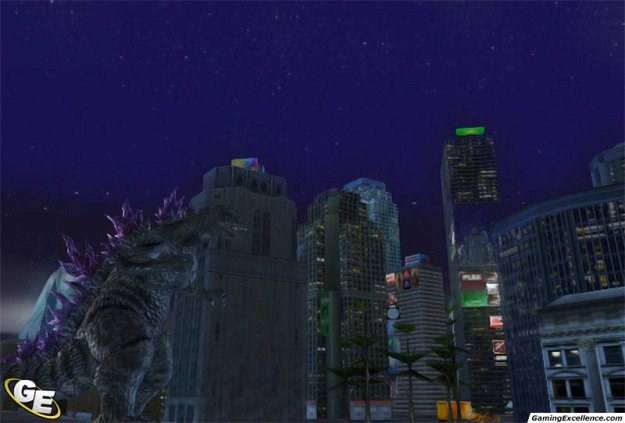 I get it, karma, I've learned my lesson: never just smile and accept whatever assignment I'm offered. Thank you karma, for sending the worst game on the planet my way. To be frank, I don't even know where to start.

I wish this was hyperbole.

When my editor first tossed Godzilla: Unleashed to me, I was excited. I mean, Godzilla killing things? Kick ass. Then I played it, or at least, I tried really, really hard to.

First, I tried for ten minutes to find the multiplayer mode, before giving up. I've been told it's underneath the "brawl" section, but I never managed to make it work. In a room full of avid gamers, we couldn't figure out multiplayer. Not a good sign.

Finally, I just went over to story mode. Things did not get better from there.

The plot of the game begins on Monster Island. A giant asteroid crashes into the island and destroys the force fields that contain the Monsters, and somehow manages to miss everything else on the planet. Coincidentally enough, more monsters decide to invade from the Earth's core while even more alien monsters decide to call Earth home. Talk about a bad day. Oh yeah, and then there are the crystals.

Honestly, I still don't know what the crystals are about. They look like beached icebergs more than crystals. From what I can tell, you're supposed to destroy them, because they do 'break'. The first time I tried to break one, a friend asked "Why is Godzilla humping a chunk of ice? Why?"

That sums up exactly how I felt at that moment. After reading around online, I discovered that the crystals are actually used to replenish your health and energy. What happened to life kits or potions, like any other video game? Why must we oppress the fair monsters of our land by forcing them to hump icebergs for sustenance?

The entire concept of the game is just as ludicrous. The arenas are small, and things that should be destroyable simply aren't. I use the term 'destroy' loosely, as things don't really get demolished. That tall skyscraper you've been humping for five minutes? It sinks into the ground. No epic chunks flying off, no chips or dings, it just rumbles - completely intact - into the ground.

Need another example? During the first level, I assumed that my task was to destroy things and be Godzilla-like and battle people. You know, giant monster and all that. It turns out that you can complete the level simply by walking out into the water. You can beat the level just by using the analog stick. That's it. No killing, no rampaging, no collapsible buildings. That's just a bonus. It took me three seconds to beat the first level. Three seconds of non-killing, non-battling, non-anything cool.

Speaking of controls, I think I found it more effective to not use them. I got so frustrated at the senseless button mashing that I just set the controller down and walked away. I won twice. In the game, A button is punch and B is kick, while the angle at which you hold the Wii-mote determines what kind of attack you launch. The system is simple, except for one noticeable problem: there's a waiting period between when you push the buttons and your character decides to move. Ladies and gentlemen, we appear to be in different time zones, please wait while we adjust our watches.

Of course, each character has a distance attack, which is aimed with the Wii-mote. The problem is that it is also very inaccurate, so most of the time your energy is wasted blasting the sky or the ground, and not your enemy.

Graphically speaking, if I squinted really, really hard, to the point where my eyes were closed, I could pretend the game looked decent. The 'cutscenes' were nothing more than comic stills with voice acting, and the story mode arenas were cut and paste. I think I could count the different kinds of buildings on one hand.

In levels with water, I noticed one really big problem; there are dust clouds. That's right, dust on water. If you happen to be fighting out in the water, and you push your enemy to the ground, little motes of dust will appear as if they had landed in the Sahara.

If there is an upside to Godzilla: Unleashed, and I'm not saying there is one, I guess it would have to be the appeal to younger gamers. If your child has no ambitions to ever play a decent game and is generally uncoordinated, then this title is perfect. Otherwise, I'd have to advise the general public to avoid this game like the plague. I plan to sink my copy into a bucket of concrete and plunge it into the deepest part of the ocean, after dropping it in a vat of carbolic acid.