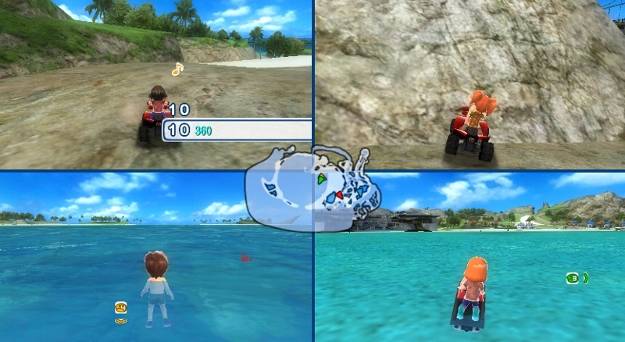 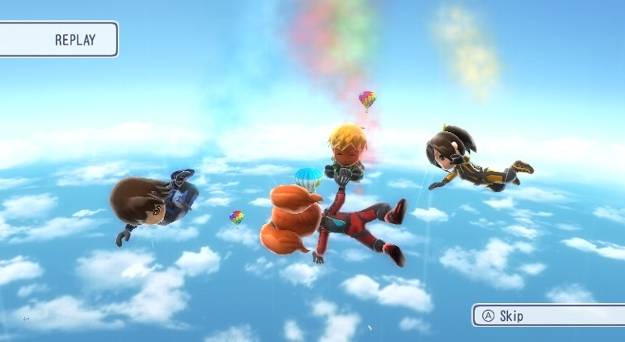 Welcome to the beautiful Yggdrasill Resort on Kawawii Island. There are four sub-resorts on the island for you to visit: Marine, City, Snow, and Mountain. Each sub-resort has a plethora of activities that you can participate in, different modes of transportation for you to use to get around, and a variety of photo locations. The main event is the Kawawii Stamp Dash, where players receive a stamp after participating in each activity, and you receive rewards for collecting stamps.

Being a water person myself, I started off at what eventually became my favourite resort, the Marine Resort. While walking around the resort is likely the most accurate way to find activities, I thoroughly enjoyed taking the "marine bike", or jet ski. The activities here range from jet ski and ATV races to surfing and scuba diving. My only regret is that this resort doesn't actually exist in real life, but as a Pisces, I might be biased.

While the Marine Resort may be my favourite, the City Resort reminded me of a recent trip to Las Vegas. All the lights, tall buildings, shopping malls, people everywhere, and lots of stuff to do send you back to the City of Sin. Only, without the sin part – after all, this is a family game. Best activity here: bungee-jumping, hands-down. With four locations, it is both fun and scenic.

The Snow Resort was fun even though I live in Canada and despise winter. Instead of going out and enjoying myself, I prefer to hibernate. So skiing and snowball fights abound, which I would rather play inside near a warm fireplace than outside in the cold and the snow. But I digress. Though, I am a far better skier in the Wii world than I am (or probably ever will be) in the real world: I dare anyone to challenge me to a ski jump competition on Wii Fit. You. Will. Lose.

Being transported to the Mountain Resort sends you to strange hybrid of medieval Europe and Frontierland and Disney World: fantastic castles on islands and horse ranges. Having never ridden a horse before, I am an expert in this fantasy world. And a tennis expert, apparently.

After exploring the resorts and getting at least 20 stamps, you get your own villa on the resort grounds. The villas are nice, two-storey manors for you and your friends to hang out in and make slide shows of all the photos you've taken around the island. There's even a Sims-style building element, where you can remodel and refurnish your villa. Mine rivals George Clooney's residence in Italy. Other rewards for completing activities and getting Silver and Gold Keys include unlocking more remodelling and furniture packs, so your villa can range from Mediterranean to Asian to Modern. I really wanna see the Girly collection. And hey, why not have a Man-y collection?

The game boasts over 40 mini-games, making the Wii the official platform for mini-gamers. However, virtually none of the mini-game content is all that "new" – tennis, golf, snowball fights, and skiing are available in Wii Sports and Wii Fit respectively, and a lot of the mini-games were reminiscent of those played in Mario Party, both for the 64 and the Wii. Nor are Nintendo gamers new to the auto-racing genre. While mini-game content may not be fresh, the surroundings are. Being able to interact with other players and some computer players, picking up treasure chest clues, and getting a new dog all make this experience different and more enjoyable than Wii Sports Resort. The mini-games themselves are perhaps a bit too easy – if I can win a stock car race with the second-place finisher about fifteen seconds behind me, then pigs have grown wings and taken flight. As well, you don't even need to win an activity to get a stamp, you just need to try it. A good message for kids, perhaps, but not enough to keep a young adult audience engaged.

Overall, the game garners points for its variety, capabilities for personalization, and ease of gameplay, but loses out on being not challenging enough for all age groups and even perhaps for its target age group: most ten-year-old kids I know who play video games play a lot of console and computer games, and would probably also find some of the activities too easy. For example, in beach volleyball, you don't even have to move your character to hit the ball; you just have to swing your arm to bump the ball. In contrast, the marine bike race controls are well designed, so you might just have to try a few different activities to find your niche. And I have to give out bonus points for a game that finds a way for you to dig out and dust off pretty much every peripheral ever created for the Wii: Motion Plus, steering wheels, nunchucks, the zapper, and the balance board all have a role to play here.

However, the game doesn't entirely fulfill its potential. The gameplay experience is cluttered with too many load screens, and marking them with cute puppy stamps gets old quickly. The computer characters are adorable anime-inspired designs, but this aesthetic never crosses over to your Mii, making your character look somewhat out of place. Also, you can't interact with all of the characters – some of them are zombies, zoning out with little music notes above their heads. (NB: You can run over other characters, or get run over, by using ATVs, marine bikes, or other vehicles to get around. Nothing happens, which is a tad disappointing). In all, the game is enjoyable, but actually going out and pursuing these activities, while it might be more costly, but will ultimately be more rewarding.