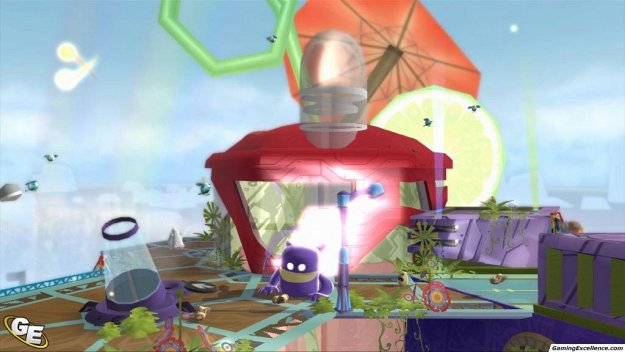 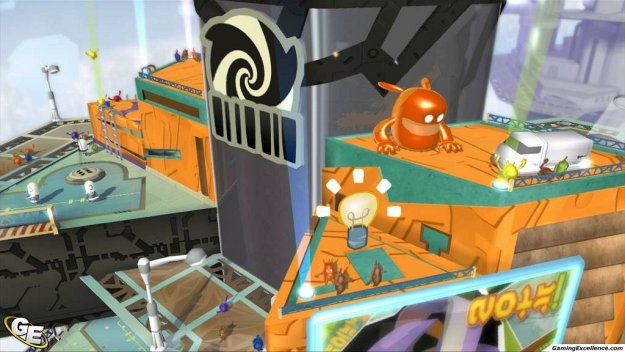 You're a colorful blob of what appears to be animated paint. Your city and home, as well as the people that live there, are becoming grey and lifeless, devoid of color and emotion. You are a blob of animated paint whose sole ability is to spread color to whatever the heck you touch.

This is your day to shine.

De Blob 2, sequel to the original that came out in 2008 (which was based on an independent game from years before that, stars the blob, Blob. Fresh from his victory over the nefarious Comrade Black, vacation is pleasant. This only lasts long as it takes for the pint-sized dictator to begin another scheme, this one involving political maneuvering, cult propoganda, and space lasers, and suddenly you're thrust into another color-spreading adventure.

As you might have guessed, much of the game is based around colour. For the most part, each level begins with you entering a gray world, with your mission to transform it by coloring things. You do thing simply by jumping through pools of paint or color bots, using the game's somewhat floaty platforming mechanics, touching whatever you can to impart your hue onto it. The more color you fill the world with, the further you can get, which means more puzzles, challenges, and what have you before you can 'transform' and area, filling it entirely with color and residents. And after that, you're tasked with going through the level, mopping up extra objectives for more prizes and collectibles, which means a whole lot of gameplay.

The challenge in De Blob 2 is generally divided between taking out a number of enemies and solving some basic color-based challenges, such as figuring out how to cross an ink-filled room to get to the other side while retaining your tint. Combat isn't really complicated, since most of your attacking comes down to simply locking on to an enemy and pressing a button to smash it. To the developer's credit, however, things are mixed up a bit, with enemies that must be rushed instead or ones where you much match the color of their stylish hat to destroy, for example.

Sometimes fighting can be a bit of a pain, though. Since color is everything from your health, your ability to attack enemies (defeating enemies requires a certain amount of color), opening switches, or even just painting walls, it's easy to suddenly, almost immediately after attacking an enemy, find yourself getting hit. Do this at an inopportune time, and suddenly you're at the mercy of the game's pitiless checkpoint system, sometimes losing up to an hour of gameplay. This only becomes a problem much later in the game, but it can really suck to lose so much time.

There are things to help you along the way. "Inspiration" pick-ups, lightbulbs scattered across the levels, allow you to grow in strength by increasing various parts of Blob such as his maximum number of lives or maximum size. A second player can also join in as Pinky the robot, represented in gameplay just as a crosshair. Pinky can't do much – just shoot enemies, collect things, and impart color to Blob – but it's a good role for someone who isn't too good at video games but wants to help out. Also, being able to shoot turn Blob from white into some other color can be remarkably helpful at time. In terms of multiplayer, there's also something called Blob Party, a separate two-player mode in which two Blobs race to bring the most color to an area before the transformation engine appears. It's a decent distraction, but likely won't last too long.

What's really pleasant about the game is its style, and how it grows as you play through the level. When you enter, everything is a dull monochrome, lifeless. The music drones on in the background, barely audible. As you start to bring color, however, things change, subtly at first. Each touch of color brings an audible musical sound, unique to each shade, to each level, each fitting into the rhythm of the music that you can't quite hear yet. But things get louder, more audible, and brighter, and before you know it, there are people dancing on the streets, the game's catchy music is playing at full volume, and color is everywhere. It's a great transition, made better by how incredibly different the beginning and the end results are. It actually makes returning to previous areas a little difficult, as it's tough to remember landmarks when they're splattered with paint.

I was surprised by how much fun I had with De Blob 2, considering I had never played the first. It's catchy, easy to pick up, and pleasing enough to the eyes and ears to continue playing for hours at a time. It's not without flaws, however, including some niggling camera complaints and the checkpoint system that gets worse the further you play. Still, while these do affect the end result, it's hard not to recommend the game to someone who enjoys a light, color-filled platformer to spend time on.