Battle of the Bands (Wii) 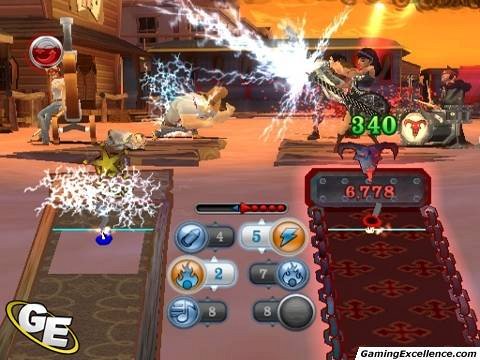 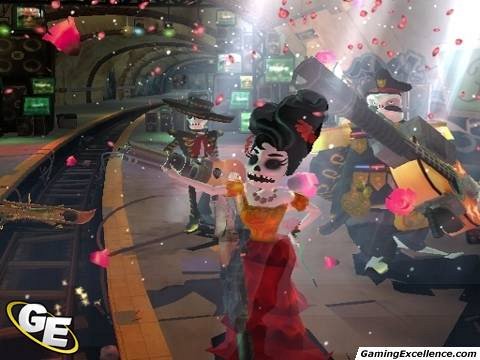 Battle of the Bands is a rhythm game with a couple twists. When you first begin, you pick your band, and aside from setting the appearance of your troupe that you'll be seeing for the rest of the game, you'll also be defining the style of music they play. This is one of these twists I oh-so-mysteriously alluded to, which I'll get to in a minute. You'll be given a few levels to choose from, each with an opposing band for you to fight it out with.

Each band has a style. Whether this is rock, country, rap, latino, or marching (yes, marching), there's a fair amount of choices to pick from, though sadly there's no orchestral. Playing a song against your opponent involves performing a variety of movements with the Wii-mote at the right time. This generally means swinging the Wii-mote in a particular direction or stabbing it at the screen. Doing so at the right time will earn you points, which will eventually determine the winner of the battle.

The controls are pretty good and respond well, though there is a stabbing motion that you must do on occasion, which doesn't work as well as the other movements. Additionally, as you or your opponent does well, the style of the song will actually shift between you two. 'Black Betty' may be country, but hearing it as a Spanish-language song is certainly something else.

If that was all, the game would be pretty dull, right? That's where weapons come in (second twist, if you're keeping count). Every band has a few weapons at their disposal, ranging from simple fireballs to speeding up the scrolling pace of the beats or making things small and hard to hit. Before each battle you must pick three to go in with, but as you beat more and more bands you unlock a few more weapons to choose from.

Overall they're an interesting attempt at variety, but weaponry just doesn't seem as well integrated into the game as it could've been. As is, you must hit a certain number of notes in a row in order to trigger weaponry, so generally just playing normally will set things off without needing to think about them. This sounds ok, but then it tends to eliminate the need for weaponry altogether. It might as well have been a combo-multiplier. There is a minute amount of skill required in blocking your opponent's attack by pressing 'B' just as it is going to connect, but that really is more about being able to focus on what's happening in your peripheral vision while swinging and hitting notes.

Unfortunately, that's all of it. There are no thrills to Battle of the Bands, just an Adventure Mode and a Multiplayer mode, where the latter involves a human player taking control of the second band. There aren't even any voices in the game, which is a shame. There's a lot of pre-battle banter between the bands and I would've loved to hear some of the voices of the characters. As for the music, there are about thirty songs to play through. They aren't the high-class hits you'll find in some other rhythm-based games, but they sound pretty good, and the shifting of styles is an enjoyable twist as the music goes back and forth.

There's not really much to Battle of the Bands. Being able only to go through Adventure Mode, multiplayer mode, or hear the music and each style in a jukebox mode, the game feels pretty thin. Without any unlockables or the like, it doesn't really have any replay value either, which is unfortunate. The addition of weapons adds to the whole 'battle' aspect, but they're just not enough. There are better rhythm games out there, and without any real meat to it, Battle of the Bands feels like it has lost this one.