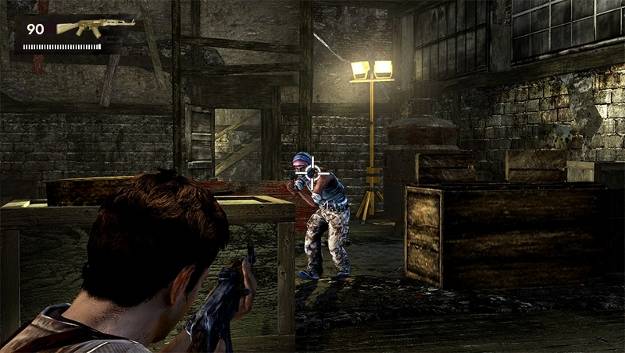 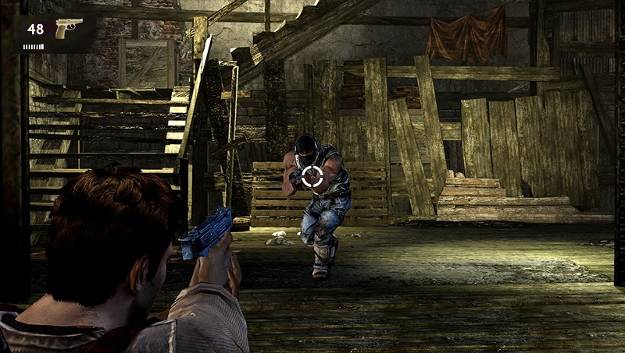 When the PlayStation Vita was announced it was pretty obvious that Sony was going to have to release some of its flagship titles along with it. I was expecting a God of War title since those have been coming out in spades lately but they defied my expectations by releasing another entry in the Uncharted series. This was good news on one hand, since the Uncharted games are well known for their quality, but frustrating on the other hand as I have only spent a small amount of time with the series since my PS3 mostly plays the "gather dust" game.

Uncharted: Golden Abyss is a prequel to the rest of the games, featuring Nathan Drake on the trail of yet another lost treasure. Or perhaps it's the first treasure hunt that we know of... Whatever. What starts out as a simple treasure hunt with an old friend of his by the name of Dante rapidly devolves into a mad dash to rescue a friend by the name of Chase, stop a madman from getting the treasure he seeks and even an appearance by Sully. 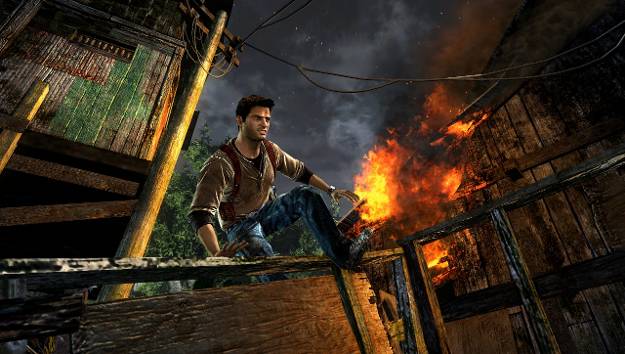 The plot definitely moves at breakneck speed, shifting gears rather rapidly. Unfortunately in almost every other way this game feels far too plodding and slow. Golden Abyss actually feels a lot more like the very first Uncharted game, Drakes Fortune. The game moves at a slow, chuggy pace as you try to get from one combat arena with resilient enemies that throw more grenades than a Call of Duty opponent to another combat arena. In between you have large stretches of ground to cover (slowly), cross simplistic platforming challenges (slowly) and take charcoal rubbings to solve puzzles.

Really there are three main problems with Golden Abyss and both of them will remind a critical mind of the same issues that the first game had. First off you have the slow pace of the game itself which was mentioned above. Secondly we have the tacked on motion controls which add very little to the experience. Slide your fingers on the back panel to ascend / descend a rope, rub your finger across a paper to take a charcoal rubbing or swipe across the touch screen to chop down bamboo.

Admittedly only a few of these motion controls are required but the ones that are really hamper the experience since they're the most important ones. When walking across gaps on fallen logs you will step on the moss on them and slip, this requires you to twist the Vita back and forth to regain your balance which is a problem if you're not good at judging how much turning is needed. The worst situation though is the melee combat – this requires several rapid swipes across the screen or you get cracked in the mouth. Since the enemy is in melee range you will be hit and then they will shoot you as they back up, killing you in no time. 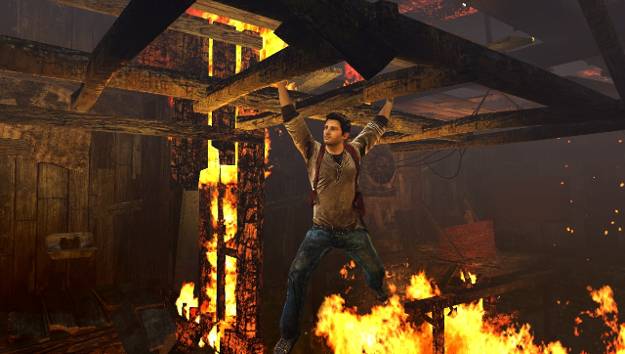 But probably the biggest issue is the combat arena setup. Due to how the game is setup you can pretty much tell when a fight is going to come up and basically every fight is best completed by hiding behind unbreakable cover (when possible), learning the pattern that the enemies will pop out from and then take headshots with your pistol. Seriously it's more like a shooting gallery with how one enemy pops out, fires his gun and then retreats to reload while another pops out. Once you figure out the pattern each area becomes pathetically easy to clear and makes the gunfights beyond engaging. Honestly it's more fun to try and take out as many enemies as possible via stealth takedowns as it is to actually fight these dopes.

There is some excitement to be had in the combat but these almost all come from particular set pieces than the regular encounters. Hanging from a rope with one hand while shooting at enemies on a cliff above you or clinging to a wall while shooting at enemies on the level above you is always amazing. It's during these sequences that the combat clicks and you actually can enjoy yourself while blasting away at faceless mooks.

One thing that surprised me was the graphics for this title being as vibrant as they are. They're not PS3 level quality but they look absolutely great. Character animations are smooth and there isn't an ounce of lag or stuttering at any point even when there's a huge gunfight with grenades flying left and right. This is accompanied by a rather small amount of loading which gets you right back into the game between stages. 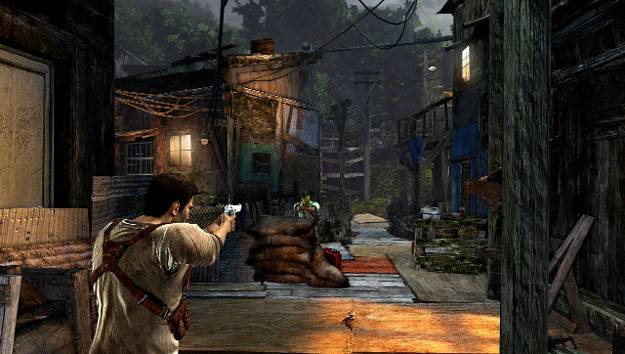 The graphics might be top notch but the sound is definitely a mixed bag. All of the voice acting is top notch, especially Nolan North as always, but there's something bizarre with the game sound effects. The pistols are especially bad with the weird pew pew sound they make reminding me more of a tinny laser gun than an actual gun. But honestly every noise made in the gunfights sounds just awful no matter if it's a gunshot, explosion or bullets ricocheting off the walls. Really you might as well just turn the combat volume down and listen to music in between the conversations and cutscenes.

While Uncharted: Golden Abyss might sound like something of a mixed bag it's definitely a must have for fans of the series. If you aren't a fan already the games deficiencies will likely put you off and deprive you of the rather interesting story. But overall there isn't enough here to warrant the more casual gamers picking this title up. The slow pace, sometimes aggravating controls and unbearably slow game just simply isn't for everyone.