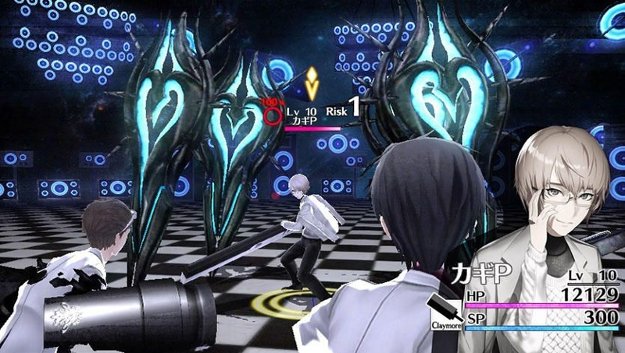 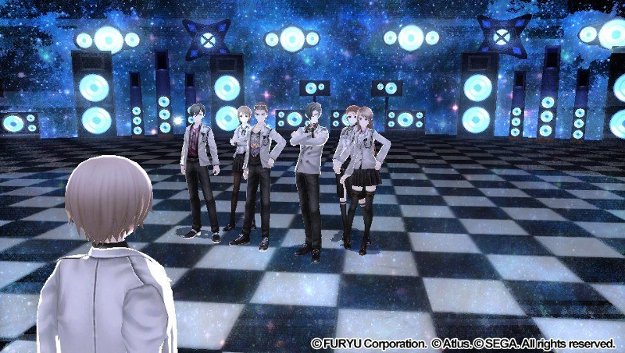 So, the Caligula Effect is a game that promises something akin to a turn-based Devil May Cry RPG with four party members in a digital world filled with NPCs to recruit and traumas to solve in each of them.

Sounds cool? Yeah, well, that's going to make the disappointment that much stronger.

In a plot formed by merging Hatsune Miku, popular Japanese vocaloid, the Matrix series, and a high school anime, the Caligula Effect is a tale of the Go-Home Club, a group of students who realize that their world isn't quite right. It is, in fact, a digital landscape created by a digital idol known who has decided to kidnap a whole lot of people and give them an ideal world, which of course they are not able to leave. The overarching plot itself, however, isn't really addressed in an interesting way, instead focusing on the smaller plots in each of the dungeons you and your party of high schoolers will visit in an aimless attempt to escape the world.

It's a bizarre plot, made even more so by the shotgun effect of being introduced to the entire premise, the club, and the mechanics of the game, all within the first ten minutes of playing. Added to this is the bizarre Jungian theme that everything down to the equipment system has - your equipment categories are, for example, 'manifestos', 'core beliefs', and 'traumatic memories'. You won't be finding any silver swords here, instead you'll find 'Tortured Soul' or some such, and equipping it to your person for some stat boosts.

The dungeons themselves aren't exactly the most well-designed features of the game either. At first glance, they almost appear to be randomly generated, filled with corridors and rooms that all feature the same textures, with a short repeating loop of music that never goes away, even during battles, and random enemies milling about. They aren't fun to traverse, and the puzzles within just boil to hunting down a switch or key for some door while taking on foes in the meantime. This might not be such a problem if each of the dungeons weren't just so long and boring to traverse, or the battles so lengthy.

One of the game's key selling points is the battle system, and I'd like to point out that, on paper, the idea sounds excellent. Before battle, you choose up to three actions your characters can take, like a standard attack, launching the enemy, powering up an ally, or simply waiting until the enemy is in the air to execute an attack. With each attack, you're given a sort of preview of the result, allowing you to delay your action to wait for an ally to execute theirs, for example. Sounds really interesting. Isn't much fun.

See, first, the preview you get isn't necessarily what's going to play out. It's the best-case scenario, so if you plan your attack around an attack to knock an enemy into the air, and that particular attack misses, then there's a whole lot of nothing that's going to happen after that. Second, you're going to find that there's isn't much variety in the combat in the slightest. There are only a couple variations on the enemies you'll find wandering the halls of whatever dungeon you're in, and generally if a strategy works on one of them, it's going to work on all of them. So battles become rote, repeating the same actions over and over again (and hoping they hit, otherwise you're going to have to wait even longer before the battle finishes). And third, the things are so chaotic that following what's actually happening is an exercise in futility. Sure, you can pause the battle at any given time to see what's actually going on, but it barely helps with any sort of planning. For the most part it just feels like programming a few actions into the party members, throwing your hands up, and hoping for the best.

The game's other big feature is the 500+ characters that wander through the game, available to talk to, raise your affinity with, learn the traumas within them, and recruit to your party. But again, The Caligula Effect fails to deliver on this in any meaningful way. If you want to raise your affinity with one of the many look-alike characters present, you simply stand in front of them and mash the X button, allowing them to spout a generic sentence before the screen fades out and in signifying your affinity has gone up. Do this a whole lot, then switch areas to do it even more (because you can only do it so much in one area, you see). Eventually, they'll tell you about a trauma they have for you to solve, which usually means a quick fetch quest or equipment change, in exchange for a benefit that can be equipped to your characters. They can also join your party, but why you'd want them is a mystery, as they share many of the same skills of members from your Go-Home Club, except that these guys are completely forgettable, not even having a character portrait to display in the party screen.

The whole system feels pointless and a giant waste of time, especially when you need to talk to them over and over and over again, or hunt down a particular item or character in order to solve their trauma, because none of this is labeled on the map - so have fun hunting down a single item in one of the large dungeons throughout the game. Oh, you can also text the characters, which gives you a stock response and is barely a system even worth using.

As a cherry on the cake, this game is damn near inscrutable and actually difficult to learn. The tutorials are fairly basic, but fail to describe a number of terms scattered throughout the game, and even skill descriptions lack any sort of structure, like how multiple skills say that they work on downed enemies, but one will work on them only, while the other will simply do more damage. There's something on the character screen called the EVA level - I have literally no idea what that means, and neither a search through the tutorials nor the game's digital manual availed me of an answer. Things like that just make playing the game a chore.

It's really just a game that fails to deliver what is a very promising premise. The Caligula Effect is one of the biggest examples of something that sounds great on paper, but almost immediately shows the flaws in everything from the story, to the characters, to the writing, to the gameplay, and more. It's not unplayable, and it's not broken, it's just simply not very fun. More and more I found myself lamenting how much of the dungeons I had yet to get through, how many 'puzzles' still needed solving, and really, that's not a game worth playing.