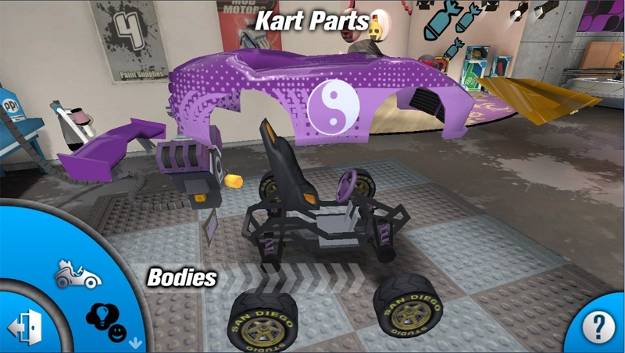 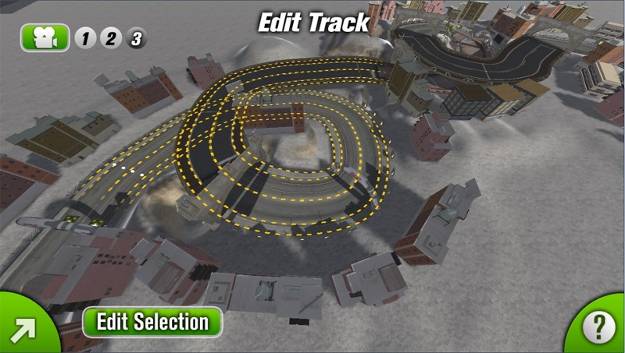 Before we even get into this review let's just get one thing out of the way – Before playing this I had never played any ModNation games. This isn't for lack of want though as the game series has a pretty understandable appeal. Wild races where you blast each other with weapons while trying to find the shortcuts that allow you to fight to first place is exactly what made Mario Kart such a hit. Add on character and car customization, track creation, remove those damn blue shells and you've got a game series that should be a hit.

From the way that people talk about it the game lives up to that promise so I volunteered to review this title. After noticing a number of issues with the game I went back to play the PS3 and PSP versions before finalizing this review only to find them to not really be an issue in those versions. This confuses me. But let's go back a bit here before dwelling on the negative.

ModNation Racers: Road Trip is essentially LittleBigPlanet with go karts (yes I realize that game is being made, shut up) and it works in this regard quite well. You can create your avatar with a wild variety of customization options ranging from skin tones, eye shapes, clothing and stickers. Plus you can do this to your cart giving you the ability to really drive your own weirdness. My avatar is a tiger skinned dude with an afro, a tube top, bright shorts and looking awfully confused about the whole thing while he drives a cardboard box with a huge cardboard spoiler on it. 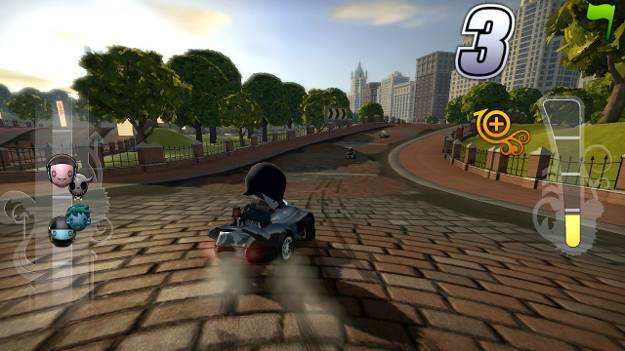 Even better than this are the track creation tools. Creating a track now is simplistic and easy to use – use your finger to draw your track and you're done. Heck you can even do things like import pictures and then trace over the picture to draw your track. Thus my created track is the neighborhood I live in which is pretty cool. Then you enter the track and can choose to either auto-populate it with obstacles and props or manually do it yourself while driving around. It all works nicely and is quite intuitive.

ModNation Racers for the PSP had a lot of this but it wasn't as fleshed out making the game more similar to its PS3 counterpart. But the one thing that did manage to slip over from the PSP to Vita that shouldn't is the touchy controls.

On the PSP the controls were incredibly touchy, more than likely to send you careening into a wall. Drifting has always been an issue in these games as it is quite hard to get the hang of. This wasn't helped on the PSP by having the controls themselves feel unresponsive but on the Vita its worse. The analog stick is the only way to control it and it's incredibly hard to do minute adjustments to your turns with it. So you're just as likely to slam into a wall or obstacle as you are to actually avoid it until you really get the hang of how to best prod the nub to avoid sliding out of control.

On the plus side sideswipes are now easy to do via flicks of the right analog stick which helps you with gaining control of the track around you. Since this also nets you boost you won't have to rely on drifting if you can't get the hang of it. A new option is to turn your weapons into boost energy so that you can speed off if you're in a position where the weapon you chose is unnecessary. Unfortunately on the cramped button pad you're just as likely to fire your weapon as you are to boost so be careful.

ModNation Racers has always had a wide variety of fun weapons to use. To make your life easier they have been color coded in this release so you'll always know what you're picking up before you do so. Grab the blue ones for the shockwave, red for a straight blast and so on. The blue shockwave is a personal favorite as when you have one pickup it sends everybody near you flying away while if you manage to grab three in a row, upgrading the weapon to max it will place several shockwave barriers on the track in front of you, dominating your opponents. 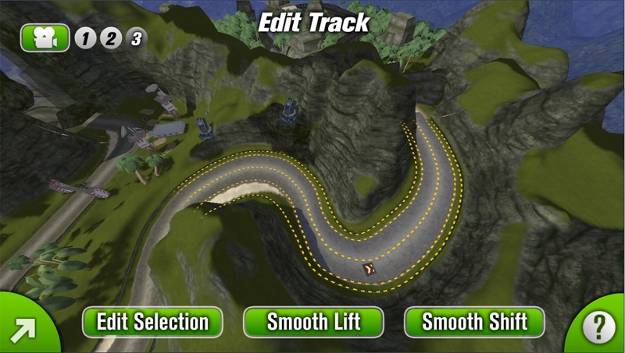 Now to be honest all of this could be easily forgiven if there wasn't one ginormous, glaring issue – no. damn. Multiplayer. Oh there have been remarks that you can download ghosts online and then race against them but who cares? In the PSP version you could play against other people but with the Vita, the device with expanded online options that has more reason to be connected to the internet constantly, you can't play online? Give me a break. There's honestly no reason to create your own goofy character, funny cart, awesome track and then never use them against others. Sure you can share them online but that's nothing of interest. I'm not going to go online to download random avatars with these creation options without having a reason to do so. Like losing to someone who looks funny as hell in an online race, like I did in the PS3 version.

Maybe they cut out in the online multiplayer because the game has ridiculous load issues or perhaps they did it because they felt the touchy controls wouldn't work well online with the lag that pops up. Frankly I don't know but it really doesn't matter in the grand scheme of things. This is essentially half of a cart racing game, based entirely on single-player gameplay that has had its single player campaign gutted for a bunch of quick races. Honestly it feels like they couldn't get the internet to work properly so they removed it, dropped the price by $10 and called it a day. Bad form and there's really no reason to buy this game for it. Buy the PS3 or PSP version instead.