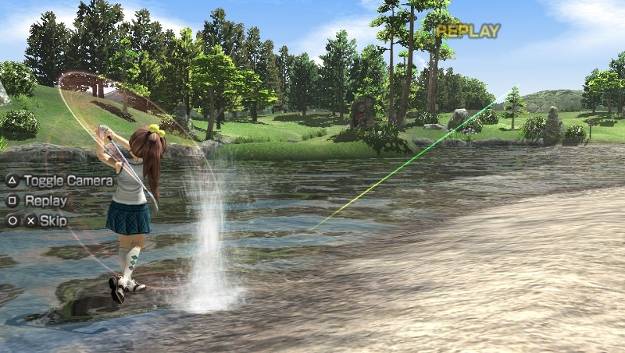 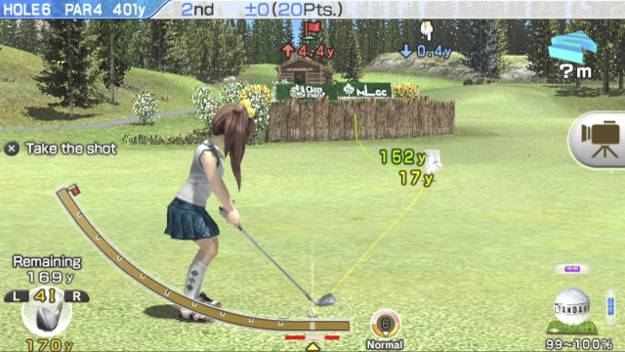 There's this thing called "just one more" and it can destroy lives. If you've played a good puzzle or sports game then it's something that you're well acquainted with. For the uninitiated this is when you find yourself unable to stop playing a game and telling yourself "I'll stop after this next round." This usually continues until you miss school, work, your date, job appointment or other important event.

We here at GamingExcellence sympathize with this tragic ailment but still find it a necessity of our job to point out that not only is Hot Shots Golf: World Invitational a fantastic game but it carries with it a great example of "just one more" syndrome. But since the game can be played in short bursts it not only manages to suck you in when you have lots of spare time but it can also be played on trips or while waiting for the bus / appointment.

To be honest if you've played on Hot Shots Golf game you're well acquainted with the basics of World Invitational. Pick a golfer, customize their appearance and then out onto the green with you. From here the golfing is a simple matter of choosing which swing method you will use – the classic horizontal gauge, an advanced circular gauge and a new curved gauge with several variations – getting your club and swinging away. 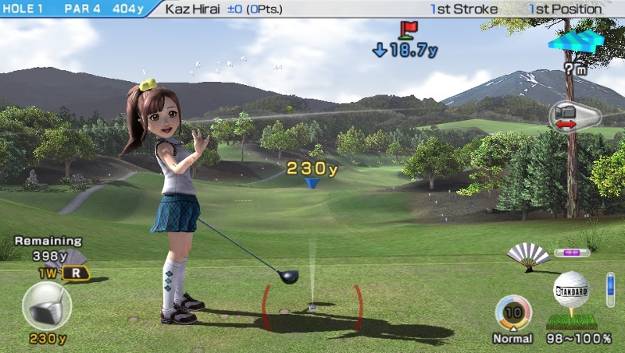 That said after spending enough time with it you'll learn to overcome this issue which is good as there's a lot to spend time with here. If you're only interested in single-player there are numerous courses to play on, many of which throw difficult obstacles at you. There are also challenges that come up that will restrict you to certain characters (often not good for the map you're on) or particular clubs so there's plenty of variety in gameplay.

But you're not going to want to play this offline all the time as the online is really good. Every day there is an open invitational that you can participate in for good rewards although there are plenty of smaller tournaments throughout the day if you want to spend more time online. They seem to appear every half hour or so and since everyone plays at the same time you can even chat via the touch screen keyboard between rounds. This allows the tournaments to move at a rather impressive clip, not bogging down with everyone taking their turns. So if someone is really scrubbing up the place you won't have to wait too long for them to finish.

Since everything you do in this game will get you points that can be used on a wide variety of customization options. Since most of these actually impact the game, with each character having unique stats and the various clubs change how you play, there is a whole lot of variety here. So you play, get points, spend them on stuff and then move on to the next round to do it all over again. This is part of what encourages that "one more round" mentality so you'll get sucked right into it as you try to get everything you need so that you can utterly dominate the next daily tournament.

So go on, give it a try. Just one or two games can't hurt any right? Here, let me put that in your Vita for you. The first game is on me.