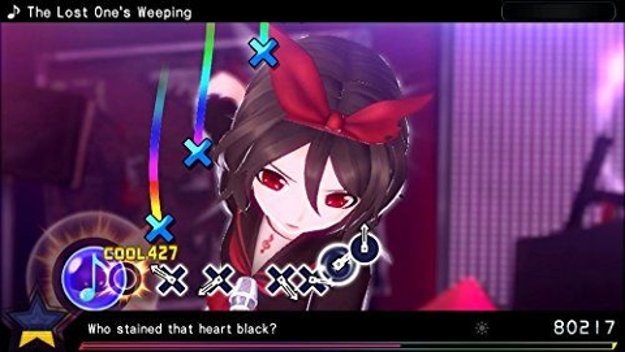 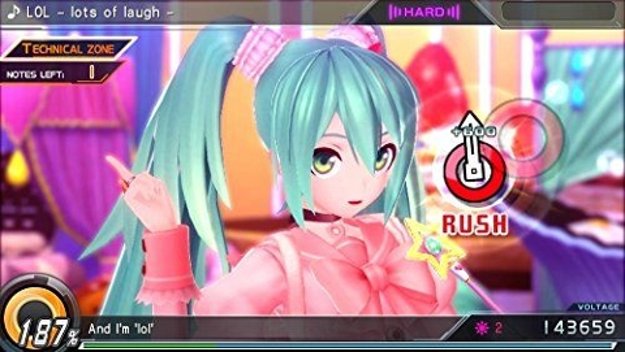 Before I played this game, I was somewhat familiar with Hatsune Miku, even though every time I try to type it, it comes out as 'Hatsune Mike' for some reason. She's a vocaloid character, which is essentially what it would be like if you gave an auto-tuner a personality and a lot of clothing options. She's been the star of a number of rhythm games in the past, as Hatsune Miku: Project DIVA X, aside from a mouthful, is the latest title in the series. It comes with a few changes to the formula and a bunch of new songs, though overall it's unlikely to really draw anyone in that isn't a fan of the characters of Miku's world already. 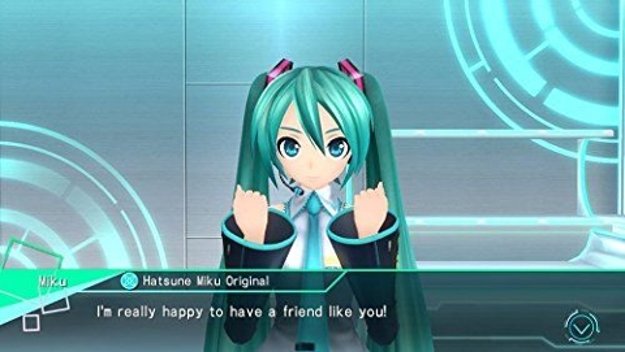 The game is pretty simple overall - symbols fly onto the screen, and when they match black spaces on the screen, you press the corresponding button. What's sort of strange about the Hatsune Miku series that separates it from typical rhythm games is how the symbols appear all over the screen - there's no set location for them to end up, so it can sort of create a chaotic mess as your eyes are constantly scanning the screen trying to find out where the next symbol is going to end up.

This is actually one of my biggest complaints with the game - you've got symbols flying across the screen, which is a little annoying to keep up with (much more so than any other rhythm game), but even worse is that there's a music video going on in the background, with flashing colors, shapes, and other spectacular nonsense that makes it that much worse to keep track of exactly what the heck is going on and where. The rhythm game itself isn't that difficult, but trying to distinguish the shapes flying around on the foreground from the shapes flying around in the background is just frustrating. 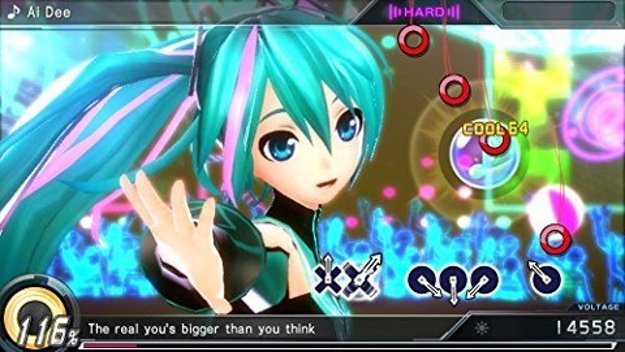 So that's the core of the game, but there's a bit more to the rest of the game than that - for one, it's divided into two modes: the first, a sort of story mode, has you playing songs in five different genres to unlock the 'clouds' they're in. Within these songs you can earn accessories and modules with which to customize your singers, which, with certain types of modules, allows you to get higher scores from songs, allowing you to clear them more easily. You can also give them gifts, raising their affinities which does the same thing, but knowing who likes what gift is entirely a matter of trial-and-error, or looking online for the answers because there is no other way to know what they want. And overall, the system of acquiring gifts from songs and giving them to the characters adds nothing to the game except another method of padding out the game.

Additionally, getting modules that you want is...well, tedious. Every song you play gives you a chance to get a single module. You may get one you already have, you may not. And there are a lot of them. You can also perform event quests, which is essentially playing some songs with certain restrictions, like a type of module, character, or even song itself. These crop up as you play the 'story', but otherwise aren't terribly exciting to perform in. 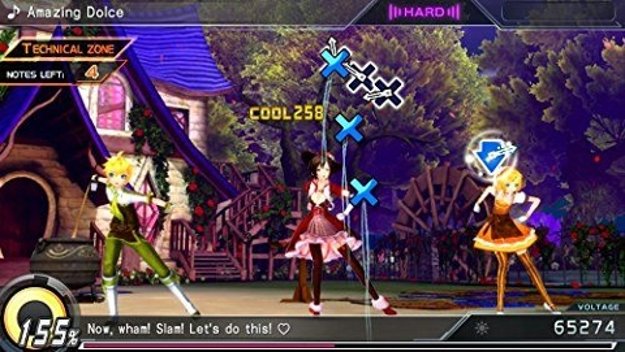 Finally, when not in the story mode of the game, you can just play in free play mode, in which you pick a song from a list, pick a difficulty, and then go to town. In this mode, you don't earn any customization items for your characters, but you can use a few different challenge items to make things a little tougher (or in a couple cases, easier), or just watch videos.

It's hard to be terribly objective with a game like this - I don't really follow the whole vocaloid genre of music, personally, nor do I particularly care for Hatsune's character itself. The game on its own is alright, and I'm sure if you like those two things you'll probably be looking forward to this title as well. But the mechanics don't really entrance me; the chaotic nature of trying to spot icons in front of a flashy, moving video isn't particularly fun compared to doing it against a fixed setting like in a game such as the Guitar Hero series, or Dance Dance Revolution. The new elements of the game aren't too bad though, keeping things in the series relatively fresh (but not entirely).

Really though, there aren't exactly a lot of options if you're looking for a Hatsune Miku title. I think it's safe to say that this is the best one on the market, but when it comes to the rhythm genre in general...well, you're likely to find something a little better if you look.