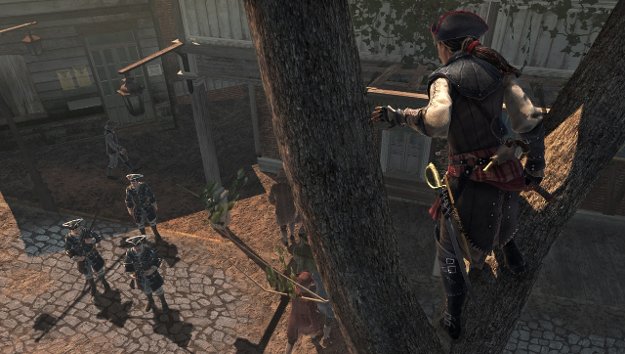 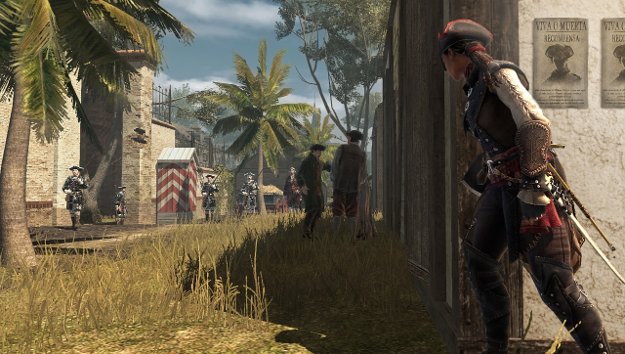 Assassin’s Creed has been a rather love / hate relationship with handhelds. The previous games have all been rather lackluster in their attempts to bring the world to life. Altair’s Chronicles and Discovery were little more than Prince of Persia-esque platformers and Bloodlines sacrificed most of the gameplay in the name of simplification. Each of these games was pretty good in their own way but they ultimately found themselves lacking the true Assassin’s Creed experience.

Assassin’s Creed Liberation has none of these problems. It is a complete package of all things that we console players know as the Assassin’s Creed experience. You’ve got the combat, the stealth, the intriguing plot and well voiced conversations. Unfortunately there is far too much of this experience that is just lacking from Liberation to make it any less than another disappointing handheld experience.

AC: Liberation follows Aveline de Grandpre, an 18th century African-French member of the Assassin Order. Taking place during the French and Indian war Aveline must walk a fine line as she uncovers a Templar conspiracy that threatens to swallow her whole world. Using her very appearance as a weapon she infiltrates high society and slaves alike, blending seamlessly into any situation and unraveling a web of deceit. 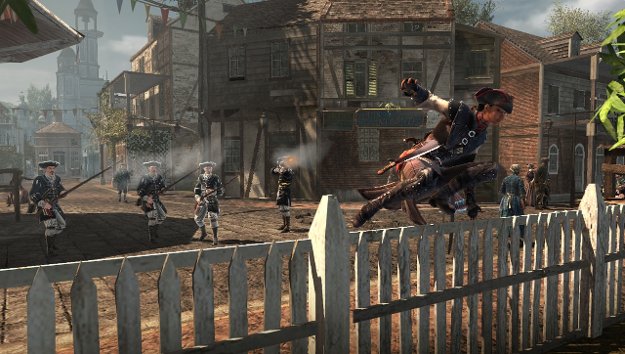 Before bashing any issues with Liberation it is important to state that the story here is top notch. The developers took painstaking steps to make sure that you feel for Aveline and her trials, care about the people that you’re interacting with and the story is genuinely shocking in many places. The dialogue is voiced believably which makes the story even easier to get drawn into the story. But while the Assassin’s Creed story has managed to survive the transition to handheld just fine very little else has done so.

This is a series that is well known for its impressive graphics but what we have here is just on this side of serviceable. Since we have a large open world to deal with there’s an immense amount of stuff going on at once for a handheld title. Walking down the street you can have near a dozen people on screen at once alongside intricately patterned buildings, banners, hiding places, horses and carts. It’s readily apparent that they didn’t push the graphics so that they could get all of this on the screen at once but it doesn’t make the weak graphics easier to swallow. An issue that becomes doubly true when even with the compromised graphics the game still manages to lag, stutter and have a variety of graphical glitches. If that wasn’t bad enough then the crappy lip synch is really the final nail in the coffin.

Those same graphical glitches and aforementioned sluggish gameplay make actually playing the game just insufferable. First and foremost Liberation just feels incredibly, ridiculously slow. Assassin’s Creed II evolved on the gameplay from the first, making it a faster, smoother experience. This combat system has only gotten even more fleshed out in the expansion packs, making the fighting even more exciting. None of that exists in Liberation.

Enemies in Liberation feel almost like their AI is completely and irrevocably broken. More often than not they simply stand around, not attacking. Even when they do attack it’s very rarely more than one at a time making it very easy to cut them down. Of course while doing this you’ll have a wide variety of glitches to deal with such as enemy attacks that don’t seem to come anywhere near you but still hit or counter kills that Aveline performs to thin air but still kills someone. Try using your ranged weapons and watch as the attack passes right through an enemy due to the enemy having moved but the game not realizing it. These don’t happen all the time but they do happen enough to utterly break the flow of combat when they do come up. Worse it seems that these happen when the game has really picked up, unable to handle the task of animating enemies, civilians and the rest of the world and it just falls apart.

Even this might be ignored if the rest of the game felt up to part but it truly, honestly doesn’t. Free running works as you would expect but while she climbs quickly Aveline runs through the streets at an oddly slow, somewhat cockeyed, gait. It’s not noticeable when trying to move with precision, although this is hampered by the cramped controls of the analog nub, but when trying to run across the city covering ground just feels abominably slow.

This is made doubly bad by the new Persona system that attempts to add new approaches to the open world but only hampers the game even further. Theoretically this is a good system – dressing as a slave lets you blend in with the workers while infiltrating plantations, dressing as a noblewoman lets you pass through areas unmolested as befitting a high class woman and dressing as an assassin leaves you ready for combat. It’s a decent enough idea that aims to essentially weaponize Aveline’s mixed roots and social prejudices.

But the developers chose to saddle each Persona with its own flaws that end up making these absolutely aggravating. Want to use the slave to get into a plantation? Good idea. Unfortunately if you so much as bump into people or accidentally climb a wall in sight of enemies you’ll start gaining notoriety. Want to use the assassin to slaughter a horde of foes in a storyline mission? Well it starts with enough notoriety to immediately draw attention on any enemies that happen to see you making stealth kind of difficult. Why Aveline doesn’t just dress in a way to pass herself off as a man to kill some of the attention this form draws is confusing to me.

The worst of the worst though is the noblewoman guise. This allows you to bribe some enemies and lure others away from their posts. These enemies can be made to fight for you or lured into a dark corner for an assassination. Awesome! Unfortunately Aveline can’t do more than lightly jog in this guise meaning that if you have to cross the city in this persona prepare to be both bored and aggravated.

Many of the failings of this title could be forgiven if the gameplay itself just managed to hold up to snuff but it honestly, truly doesn’t. While it’s possible to ignore these and find some enjoyment in the title there’s really no reason to bother. Sluggish gameplay, graphical glitches and just plain bad gameplay elements make this game more of a chore than a fine addition to the Assassin’s Creed franchise.