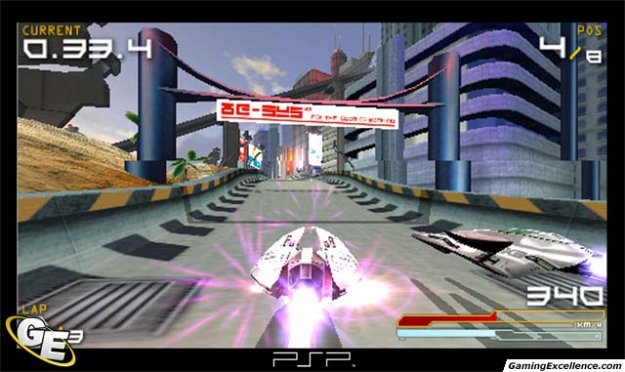 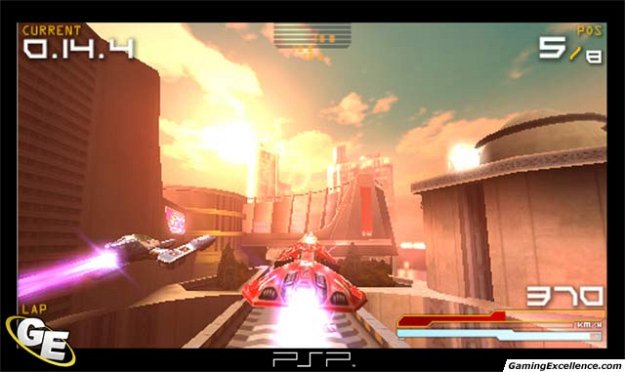 Okay, I confess: although I like to think of myself as wise and knowing in all things game-related, sometimes an incredible series passes me by and I miss out on it. Such was the case with Dynasty Warriors; I starting playing it because Seth on The O.C. was playing it and it looked fun. Now, I've finished Dynasty Warriors 3, 4 and 5 as well as Samurai Warriors. Another series that I'd heard about but never put any time into knowing was the Wipeout franchise. After playing Wipeout Pure though, consider me hooked and addicted. While it's not for everyone, this is one game that incredibly hard to put down once you get the hang of it.

From a first glance at the instruction manual to the in-game design, you will quickly be taken in by the atmosphere that Wipeout's peculiar barcodes, shapes and clean conservative font create. The in-game menus also follow this same line with a minimalist-futuristic-alien-zen-likeness to them. It's at that moment that you realize that this may be the perfect game for the new PSP: different, strangely familiar and with so much possibility. Luckily, like the PSP, Wipeout Pure delivers the goods and then some.

Wipeout Pure, for the uninitiated, is a fast, futuristic racing game. The ships that you pilot are like nothing ever seen before; a cross between Star Wars' pod-racers (Wipeout came first), and aerodynamic cigarette boats. These ships have thrusters, weapons & airbrakes and race on enclosed race tracks at insane speeds. There are various speed classes within the racers and within each class, various ships (with varying statistics and number of airbrakes). In its purest form, regardless of the mode you are playing in, the object is always to race around a track as quickly as possible. And regardless of the mode you're playing in, this always provides the sweet and instant gratification of adrenaline.

Don't be fooled; Wipeout Pure is not a game that you can pick up and play well. There are particular nuances to this game that take time to recognize, anticipate and perfect. But once you have a "feel" for Wipeout, it creates an almost symbiotic link with your inner-self and hurling along the tracks at breakneck speed feels almost like an extension of oneself, or at the very least, natural. Among other things, you will need to learn manage speed versus breaking versus corners versus speed pads versus ship recovery versus weapon pick ups. While winning the race is always the ultimate objective, there are usually a few ways to go about it and everyone seems to play Wipeout differently.

The controls are nothing if not elegant. The X Button controls thrust while the Right and Left Triggers control the right and left airbrakes. The Square Button fires weapons and the Circle Button "absorbs" the equipped weapon (or pick up) and replenishes your ship's energy. The Triangle Button gives you a Rear View and the Select Button allows you to change camera angles. You control the ship's heading and pitch using the directional buttons (which handle with perfect sensitivity) and use combinations of left/right command inputs to execute barrel rolls after you're launched from a jump pad. The control take a bit of time to get used to (particularly because of the positioning on the Triggers on the PSP) but within minutes become second nature and intuitive.

The single player modes are plentiful; Single Race allows you to select your ship, track and speed class of your choice and try to win against the A.I., Tournament (the real meat of the single player mode) has you racing in a series of races, accumulating points and unlocking more series of races. Time Trial lets you race alone on any track (with optional ghost racer) to post the fastest lap possible. Free Play allows you to explore and test out tracks/ships to your heart's content while Zone (a really fun mode) sets you cruising alone on a track while increasing your speed constantly. The mode ends when you've taken enough damage. The only downside is that there aren't nearly enough Zone tracks to enjoy, maybe in the sequel? Wipeout Pure also does an insane job at tracking not only your progress, unlockables, medals, best times and such, but also a myriad of other stats (including how long you've been looking at your stats).

As a multiplayer title, Wipeout supports both Ad Hoc (2 PSPs communicating directly with each other) and Infrastructure (connect to a network and a WLAN) modes. Multiplayer modes include Single Races, Time Trials and Tournaments. Racing against friends is fun, but Wipeout's A.I. is so good that simply enjoying the Single Player mode is enough to suffice anyone. Multiplayer modes are very smooth, however, and races are generally lag-free. The best part of connecting your PSP to a network is that you'll get access to Wipeout's downloadable content (the first available for the PSP). Hopefully we'll see even more content for Wipeout and other games will start offering some as well. The other cool thing is the ability to broadcast and receive other players' stats and high scores.

Graphically, Wipeout Pure is one of the best looking games on the PSP. While not overly flashy and kinetic, Wipeout maintains its clean, crisp look even at high speeds. Clashing with other ships and using weapons also nets you some impressive graphical effects. Wipeout creates a certain feel that begins with its menus and the races carry the same look; streamlined and futuristic. Quite ingenious from an artistic point of view. Musically, Wipeout continues the same themes with its breezy electronic futuristic soundtrack that seems to fit perfectly but feels like nothing ever heard before. Exceptionally good low-end sounds from the PSP. The sound effects are spot on and feel incredibly real.

What negatives can be said about Wipeout Pure? Not many. Truly, it is a game that is easy to love and play in marathons. But it's also not a game that will please everyone. Those expecting a "straight" racer like Ridge Racer or Burnout will be disappointed by Wipeout's learning curve and physics. It's not an easy game, but with time, it becomes a very intuitive one that rewards on so many levels. For Wipeout fans, this is a no brainer. For newcomers to the series, consider this a must-have title. An amazing game that comes highly recommended.