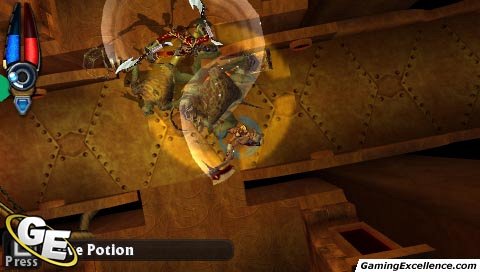 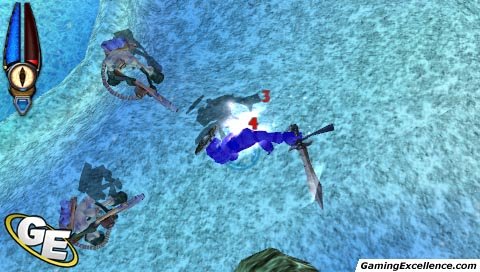 When the PSP launched, and for a long time thereafter, what it was in desperate need of was a decent RPG. Sony should have paid attention to this a bit more since the PSOne and PS2 have exceedingly strong RPG libraries and even a simple port of one of many RPGs would have been a smart move. Instead, the PSP launched with an action-RPG a la Diablo titled Untold Legends - The Brotherhood of the Blades. The title looked a lot like a Champions of Norrath-type game and was one of my first purchases. Unlike many, I knew what to expect and I put up with all its quirks and issues. In the end though, long load times, few levels, willy-nilly difficulty levels, shallow multiplayer modes and an unintuitive inventory/management system kept me from picking it up ever again after finishing it. Still, I remember it fondly (warts and all) as the game I played on vacation in 2005. A year later, Sony Online Entertainment tries to set things right by going back to the Untold Legends' drawing-board and giving gamers everywhere the title that many had expected a year before.

Kicking off the proceedings with a great introductory cut-scene, The Warrior's Code tells the story of an evil warlord turned emperor who spreads chaos, destruction and oppression upon the land and the secret shape shifter race of changelings who will band together to oppose him. While this cutscene is very nice to look at and seems to set the scene, TWC's biggest letdown is actually its complete lack of an engaging story to rival its intro. Whereas most RPGs are judged on their themes and development, TWC is purely grounded in its actions, special abilities and character upgrades. In the original Untold Legends, one of the best aspects was creating a character. While there were only 4 choices then (Knight, Druid, Berserker and Alchemist) it was still fun to create an avatar and upgrade him. TWC follows the same pattern, giving gamers 5 choices; Guardian, Disciple, Mercenary, Prowler and Scout. Each character type features slight gameplay variations as well as a different changeling (morphing) form, enough so that a second and even third play-through may seem validated.

At its core, the Untold Legends series, much like Diablo, Champions of Norrath and countless other action-RPG franchises is all about entering a new environment, killing off hordes of enemies, scooping up the loot left behind, upgrading equipment, leveling your character and repeating. The Warrior's Code is no different in this respect and luckily, it handles each aspect quite well. The fighting has been streamlined a bit from The Brotherhood of the Blade and now there are six different buttons that can be mapped out to abilities on the controller (D-pad up, down, left, right and circle, triangle). Fans of the first game will note that the left and right triggers have now been swapped around and the left trigger is now the "shift" button which gives you access to blocking, weapon switch, morphing, etc. While this was confusing at first, the left trigger is actually better positioned for this and much more intuitive.

Another nice upgrade from Brotherhood of the Blade is the inventory/management system which hasn't changed all that much but is easier to navigate and more intuitive with its information feedback. Equipping weapons and accessories is a lot easier and leveling up stats is handled much better as well. The other aspect of the Brotherhood of the Blade that took a bit of playing to figure out was its special ability tree tab. While there is still a specials page with abilities to level up, it's now much easier to understand what you're committing to, and how an ability affects others. The map has also been improved and it's a lot easier to navigate dungeons and maps without retracing your footsteps over and over. The other big upgrade comes in the form of loading times. Where the Brotherhood of the Blade featured load times that were excruciatingly long, The Warrior's Code takes a lot less time to load and switching between inventory/management screens, the game proper, conversations, etc all happens quickly.

With all these improvements however, TWC still feels and plays like the same game TBOTB was. Even with the morphing element, the four new ability buttons, bigger levels, more maps, more interaction with NPCs and more, the core mechanic of move, kill, move, kill hasn't changed. This is to be expected, but it also means that those expecting a completely different game will be disappointed. TWC doesn't re-invent the action-RPG genre, it doesn't add a deep layer of traditional-RPG goodness into the mix and it doesn't try to be anything other than what it is. Fans of the original though, of those who saw a hint of something fun in it, will more than likely be more than pleased with this sequel.

The biggest addition that SOE made to its Untold Legends' package was a deeper multiplayer mode. Still capable of Ad-hoc and Infrastructure modes, TWC now features a great two player co-op campaign, as well as a ton of player versus player modes. These vary from typical deathmatch type games to capture the flag and loot collection games. The co-op mode however is the best mode of the game since it seems that all action-RPGs are predisposed to cooperative play. In this case, playing through the game with a friend is the most fun you can have and creating, hosting and joining games is as easy as can be.

Graphically, TWC goes for a slightly more cartoony look than TBOTB featured and for the most part succeeds. The levels are also more varied this time around and while the morphing ability is purely a gimmick, the look of it is quite nice. The abilities and their graphical representations have also been tweaked and are all over-the-top. This is nice, but they sometimes hinder visibility. The various zoom levels are perfectly suited and the various cutscenes are very nice. In the audio department, TWC features music may not be readily memorable, but which seems to suit each level and situation perfectly. The voice work has also been improved greatly and seems a lot more seamless.

As a fan of the original, I was curious about the sequel. While not the game that X-Men 2 is on the PSP, The Warrior's Code improves on enough aspects that those who enjoyed the original will find a much better game waiting for them here. The co-op mode adds a lot of incentive to picking this one up and the improved single player adventure is a lot more fun as well. Those buying this or looking into it due to its morphing/transforming angle will be disappointed since it really isn't as big a focus as the box art makes it out to be. In the end, while there is still room for a better story and more traditional RPG elements, The Warrior's Code is still a capable game that fans of action-RPGs should definitely look into.