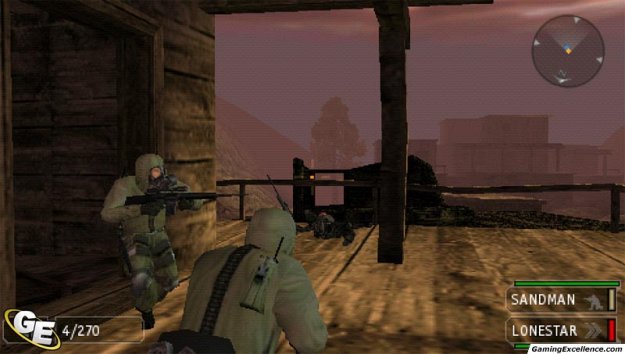 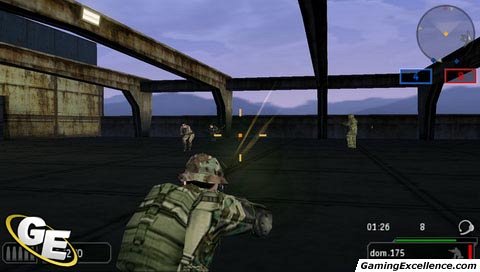 I've always loved the SOCOM series' strategic methodical gameplay based on real world events set realistic environments. The original Fireteam Bravo, released last year, was a very solid shooter with several noticeable flaws, primarily in its overly difficult controls and simplistic targeting mechanism. Fireteam Bravo 2 doesn't really address these issues, but builds on the experience of the original and offers up a few new features along the way.

The presentation is as good as the best titles on any system. I was absolutely blown away by the initial cutscenes that bookend the core missions in campaign mode. The graphics are gorgeous and the voice acting is just as good. I would even say that the initial presentation rivals that of its distant PS2 cousins. The interface is as slick as they come, making preparation for battle appropriately complex, without delaying getting into the game needlessly. This is both good and bad for the title as it boded well for my initial perception of this being a quality title, but served to highlight some of the more glaring oversights as well, namely game design and gameplay.

Those who've completed Fireteam Bravo are probably wondering what's new this time around? In an effort to make it worthwhile to tactically maneuver through a level rather then blowing everything to pieces, the developers have implemented a pair of new reward systems that are designed to introduce a more tactical experience. The first of these is Command Equity, which is attained by completing secondary mission objectives. As you earn points you'll eventually be able to call in a bit of support to help you on your mission, one of these being air strikes that will clear an area of threats. The second reward system is Local Influence, as you rescue civilians and generally treat them well; they'll help you out with obtaining weapons or providing the locations of enemy soldiers. For the most part these features are well-conceived, but I didn't find either one of them to be a dominating factor that changed the dynamics of the game all that much. For those who prefer the run-and-gun style of play then these features will likely go overlooked, otherwise it adds a more tactical dimension to the gameplay formula.

With that said the gameplay mechanics of Fireteam Bravo 2 haven't changed much from the original, and carry along many of the same problems. During my first exchange with the enemy I fired two well-placed rounds into my target from a fairly close range, with absolutely no reaction. He was then alerted by my backup, whom I had commanded to follow me, which resulted in me taking some damage, before said wingman could drop the baddie. It's worth mentioning that my back up was able to dispatch the victim from the same distance that I tried from, causing me to wonder what was up with the collision detection. I then continued down an extremely linear path, leaving my trusty teammate to hold his position while I scoped out the next enemy. I engaged my scope, lined up the enemy's head using the reticule and fired twice with no result. Moving forward a few feet alerted the enemy who had turned around and spotted me. Shooting this time produced the desired result, finally. Eventually you learn to live with these issues and even come to expect them, but they are still somewhat detrimental to the game.

As with the original SOCOM Fireteam Bravo release on the PSP last year, this game also features an overly generous lock-on system which pretty much means you can drop and enemy even if your reticule is 20 plus degrees off of the target, which removes the challenge of lining up that precise shot. Another tactic that is regrettably unnecessary here is stealth, again due to the aforementioned level design and the incredibly odd behavior of the NPC's in the game. With the exception of certain more expansive levels later in the game, you'll find that there is a real lack of choice as to how you approach certain levels. That's because, as mentioned earlier, most levels have a set path to your ultimate goal from which you cannot stray. Want to hammer out that sub objective before moving on to the bigger goals? You can't. You'll simply have to go through the scripted motions before moving on to primary objectives. Want to sneak in the prone position past that unsuspecting enemy? Sorry. Paths are narrow with no discernable hiding spots save for a bush or a rock here and there. Even in more urban areas, you aren't really given much choice as to which structures you can enter or how you will go about dispatching foes. The extent of the stealth elements here boil down to not getting too close to an enemy you've spotted as to avoid moving into his line of sight. The threshold between remaining undetected and being spotted is more akin to an on off switch, as if there is a piece of angel hair pasta separating being fully concealed or in open sight.

Now this is not to say there aren't some redeeming qualities to the gameplay. As with the original Fireteam Bravo, I've never played this game online or off where I went in anywhere guns a blazing, with the exception of a following a flash bang into a room where enemies could be waiting. The ability to issue commands to your teammate is a little convoluted in that the specific commands aren't mapped to the face buttons (as is done in the PS2 series). The game requires you to scroll to the command after bringing up the menu with the circle button, which seems overly complicated. This feature is also rendered unnecessary, given that the levels are not remotely conducive to setting a teammate up in a strategic location while you engage the enemy or vice versa. Sending my backup to specific locations up ahead generally resulted in him triggering scripted clusters of enemies to attack, at which point he would drop them all with ease. In fact, I played through the whole first level at one point only engaging two specific enemies the whole time. The rest of the hostile encounters were left to my buddy who was only too happy to drop these enemies for me.

The controls are adequate, but again lose some of their intuitiveness, mainly because of the lack of second analog and shoulder buttons on the PSP. It's a shame that these controls really haven't been addressed, since it was a key issue with the first Fireteam Bravo release on the PSP, especially when you consider how successful the control model used in Syphon Filter has been.

The audio isn't groundbreaking but is par for the series. Weapons sound appropriately powerful. I became extremely annoyed with my teammate who has limited responses to your commands. "Who-aaa" becomes extremely tedious after hearing over and over again for several levels. The quality of the audio in the cut scenes is spectacular and I only wish the same attention would have been paid to the in-game sounds, but they're perfectly serviceable.

I did get a chance to play multiplayer with two other players, and I can say that if you have the means to do so, this game has replay value in spades. I was please to find that the collision detection problems described earlier don't show up as frequently. You're also able to choose from custom maps and scenario's which adds a heck of a lot more depth to the game overall. The gameplay is grossly improved when you don't have to deal with some of the technical and design shortcomings of the single player campaign. On its own, the campaign modes only replay value will be in the form of revisiting the same levels repeatedly as you learn when and where the scripted events take place, making it an exercise in trial and error. After you've completed the single player campaign there is conceivably no reason to go back through the exact same events.

Fireteam Bravo 2 is a perfectly serviceable third person shooter with some tactical qualities, notably the addition of Local Influence and Command Equity. With that said, it fails to address many of the shortcomings of its predecessor, something we can only hope is addressed in future releases. If you're a fan of the original Fireteam Bravo then this one's worth checking out.