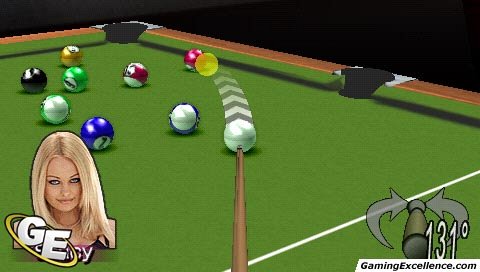 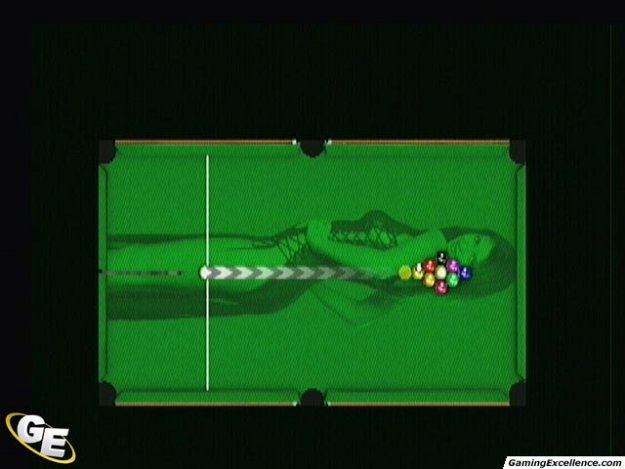 Eidos and Conspiracy Games have really tapped into something clever here. Well sorta! While I'm not really a fan of pool, I do certainly enjoy playing games with lots of bonus unlockable content especially when it involves sexy pictures and videos of scantily clad hotties. Sure, I feel dirty the entire time and the actual pool is not all that great, but still, very few games have the nerve (and integrity) to simply offer up such a blatantly sexy (or sexist) package without any compromise. In recent memory, I can only think of Rumble Roses, Leisure Suit Larry and The Guy Game as games that have truly tapped into the "sex sells" motto with as wanton abandon. While not a perfect game by any stretch of the imagination, fans of private pool playing can do a lot worse than this game and the tantalizing extras are just icing the cake.

The pool game offers plenty of variety in game modes and table speed, pool cue selection, tables, balls, etc and even has a few neat single player games that are somewhat fun to play. A time attack mode of sorts to clear the table, a game that forces you to clear the table in 20 shots or less, and there are also the multiplayer games; against the AI or against other pervs over Wi-Fi. It's a shame, and almost sacrilege, that there's no hot-seat multiplayer where two or four players could take turns on one PSP, but maybe this isn't the sort of game you'd play with friends anyway... too many questions!

The pool physics, when the table speed is set to medium, is quite playable, but you'll still see balls bank at odd angles for no reason once in a while. The aiming is well handled even though an option to see your ball's trajectory (or a theoretically view of where it should go if power is set perfectly) would've been nice. The only caveat with the aiming is that it's sometimes difficult to tell which ball is which (sure they're colored, but we're not all pool-hall junkies) and makes sinking a certain type of ball (or a certain numbered ball) harder than it should be. Luckily, there are many camera angles and if you pan around enough, you can figure anything out. In the control department, while it may not seem intuitive at first to set the power and actually take a shot, it becomes second nature soon enough and shouldn't stop anyone from having fun.

In most games (there's no true single player campaign, so you just pick various game types and play) you'll get to chose your venue, table (of course there are various model graphics on them), balls (no comment), cue, character (yes, you can pick a guy - more on that in a moment), table speed and soundtrack. You're then off to play some pool. If you win, you'll more than likely unlock some content in the game. There are unlockables in the form of venues, cues, tables and balls which are not tracked other than in the selection menu because Pocket Pool is all about unlocking some Sexy Time Content! In the gallery you'll see page after page of locked items which will immediately motivate you to get playing. In this gallery, you'll unlock pictures, videos and, ugh, music tracks. Couldn't these have been put somewhere else? It also doesn't help that after unlocking any content the game will ask you to save your game, but not before asking you if you want to delete some files to make room for the overwrite operation. Yes, this is the worst save system ever implemented in a game, but after you know about it, you simply click "no" and move on to a traditional save. No big deal.

Besides the pool, there's obviously the sex, and Pocket Pool drips of it. From the tutorial where "Isabelle" shows you the ropes of viewing from different angles and actually using your stick, with her coy and come hither lines, to the design on the pool tables, the little tongue-in-cheek audio clips from the girl characters and the pictures/video themselves, everything screams "sex sells". But since we already bought the game, it's nice to know that what's there is handled with a lot of class and the pictures and videos are actually quite clever and artistic. While Metal Gear Acid 2 had half naked girls pointing guns at you, Pocket Pool just has them lifting this piece of clothing or that piece of clothing as the camera rotates around. The pictures and videos are really well produced and contrary to what some reviewers may have you believe (which makes me question how much time they spend surfing for homemade porn each night) the women herein are quite fetching, very sexy, always classy and definitely leagues above what some will refer too as trashy. It's also a real shame that the pictures cannot be zoomed (to better appreciate the textures of course) or that the movies cannot be paused or rewound (I'm not even going to bother lying here).

While playing the pool games you will get to pick characters (avatars) to play as. These include eight girls and, quite disturbingly, five guys. While I do not see the need to include dudes in a game which so obviously caters to heterosexual males, I suppose it's allows girlfriends and wives the ability to play as well. Unfortunately, if you're actually into the guys, they are no unlockable videos of them in compromising positions as they model the latest banana hammocks. You'll get a kick of how stereotypical they've been made however as they are all appear to be clones of known people: Biagio is obviously a bulked-up Billy Joe (Green Day), Clark is a Paul Walker/surfer-dude knock-off, Walker is very Joe Rogan-y (Fear Factor), Jason is a Justin Guarini/Warrick Brown (CSI) stand-in and Ledbeter is obviously related (in a not-so-distant-way) to Napoleon Dynamite. So if you want to talk you better halves into unlocking stuff for you, you'll probably want to play up those angles.

And just like when you go out to the strip clubs, there's something about Pocket Pool that's completely fake: While there are eight girl avatars in the game (and tutorial girl Isabelle), there are only four female voice actors. It makes me feel so cheap and used to know that at least five of those girls are completely playing me and just taking me for a ride. Luckily, the producers were able to get four male voice-over actors to compensate (why?) so I guess this is a moot point. The music tracks are nice and yes, if you close your eyes, you can almost picture an adult movie. Well, almost.

Graphically, Pocket Pool has some really nice textured environments/venues and features some distinctively well made pool tables. It's just too bad that the balls aren't as clearly visible as they should be and that characters (avatars, bystanders, spectators, etc) aren't present during the games themselves expect for static headshot overlays which actually take up a little too much room on the screen.

As a service to my fellow men (and women... oh behave) trying to unlock content, I should mention that if you play Black Jack with the table speed set to medium and you simply take two fully-powered shots in a row without touching the aiming, you should always sink the 14 and then the 7, thereby easily (and quickly) winning and unlocking content. Don't thank me, I got it off a message board and couldn't believe it worked so well until I tried it.

Yes, perv haters and righteous advocates of the world, we know these are just pixels (but then so are the Jessica Alba, Scarlett Johansson and Queen Amidala desktops you have). And yes, there are actually "real" women out there in the world to meet and go out with. And yes, this is slightly demeaning (but will still sell, just like blow-up dolls, Pauly Shore movies and seedy lap-dances) so why not just embrace Pocket Pool for what it really is: a fun (and harmless) alternative to actually having to leave the house to take a whack at some balls. Sure there are better pool games out there and sure this won't beat a free subscription to the Victoria Secret's catalog (it's amazing what the those bras can do isn't it?) but as a budget title you can do a lot worse if you enjoy moving a load of balls around or peeping the ladies. Long live political incorrectness!