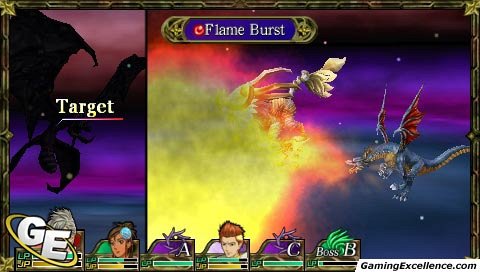 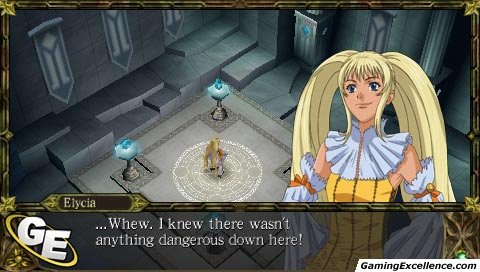 Monster King Jewel Summoner (herein known as MKJS) is an RPG developed by Gaia and produced by Atlus for the PSP. MKJS presents a fantasy world where a long history of respectful human/monster co-habitation has evolved into human fear and attacking monsters. The life force of the attacking monsters can be trapped into Jewels to be invoked by either a "Jewel Summoner" (the good guys) or nefarious supernatural evildoers known as "Abominations". MKJS follows the story of a young man named Vice as he joins the "Order" (Jewel Summoning school) to gain experience and hopefully defeat a particular Abomination he's been searching for.

As is the RPG way, there is a large story component in MKJS. The story segments use a sort of interactive story book format. Stationary backgrounds with minor animation (such as falling snow) are used to showcase which environment (residence, saloon, plaza) Vice and his teammates are in. The narrative is progressed by various characters in the game using extremely crisp sprite drawings and full voice dialogue. As each character interacts they appear on either the left or right hand side of the screen (where they either talk to, or listen to whichever sprite is on the opposite side of the screen). The sprites are illustrated similarly to the background environments with static pictures and minor animations. These sprites move their mouths as they talk or disappear and reappear if their expression or mood changes in any way. The overall presentation is crisp and clean but at the risk of stagnant mouth-flapping sprites. It would be nice to have more animation during the story scenes to spice up the overall experience and differentiate it more than looking at what can easily be mistaken for a still picture.

The music in MKJS is easy to listen to and is reminiscent of some old tunes SNES RPG tunes with a little more of a hip techno feel. MKJS has more voice work than any game I've ever played on the PSP. The voice talent is top notch in general with a few notable exceptions. While playing you'll run into characters that are so absolutely annoying you'll wish you were playing Mortal Kombat; at least then you could counter the annoyance with a classic decapitation or more subtle disembowelment. Despite the annoying voice work, the overall voice talent and sleek stylized artistry really showcase the PSP with high production value.

In between story developments Vice and his crew jump around to various pre-determined places on the map select screen (with new locations becoming available as you progress through the game). Each location has Vice fighting various Abomination-summoned monsters in order to protect poor helpless people. Once a mission in a particular location has been completed, you can always return to fight more monsters and pad your monster's stats by gaining experience points. Each member of your team can have up to three Jewels on them at any one time with extra Jewels stored in the "Jewel Bank". The monster in each Jewel is aligned with one of six different powers of nature (fire, ice, wind, earth, thunder, or water). These monsters increase their skills by gaining experience during battle or by visiting an Amalgamist (whose trade is in strengthening Jewels). The points you earn during battle for expenditure and the current level of your monster will dictate how and what type of upgrades an Amalgamist will be able to perform for you. As an aside, one of the Amalgamists is a dirty old man who continually hits on the females in the in a creepy get-away-from-the-playground-you-dirty-old-man kind of way. Disturbing indeed.

The monsters encountered in the game can be caught and collected using prisms. There are numerous monsters to collect, trap, and kill in the game with some very creative and colorful characters. While making my way through the game I stuck with the same nine monsters and continually upgraded their skills. Using the talents of the female Amalgamist (as opposed to the dirty old man), I improved their skills and added attacks from different natural forces to my monsters (for example I added a wind attack to my fire lion). Throughout the game Vice acquires various skills (such as a hover or reveal) that help him gain access to more reclusive areas of various dungeons.

I have to admit that I generally prefer games that require much less of my intellect (less reading, more killing). If a game gives me a mediocre enough storyline as to why zombies exist, and why splattering their blood with a brain encrusted melee weapon is the planets only hope, I'm generally pretty happy. With that admission out of the way and a reminder that I actually really enjoyed the presentation of the story, I have to say that this game has way too much story and not enough action. During the first half hour of gameplay there wasn't much more to the game than listening to the sprites communicate with each other. I thought that perhaps the game designers were trying to get all of the story components out of the way right away but unfortunately the verbose explanations and constant character developments never really stopped.

Another issue I discovered with MKJS was that the game experience is way too linear. There's no sense of free roaming in this tightly structured environment beyond gaining experience points for your monsters in levels you've previously completed. The added skills that Vice acquires through the game allow for some great feats such as revealing secrets or hovering over holes; but each can only be done at a pre-defined area. What fun is that? A tightly structured game becomes nothing more than an interactive storybook. The replay value of the game is close to nil since once finished, it would be the same experience completing it again. Having open-ended missions or a free-roaming map where you could pave your way through the simulated world would've been a definite plus.

Despite the heavy time investment the storyline requires during gameplay and the very structured linear gaming experience, I still enjoyed this game. If you're a seasoned RPG gamer, then you'll likely appreciate the various aspects Monster Kingdom: Jewel Summoner. Otherwise, it's something you may want to take a pass on.