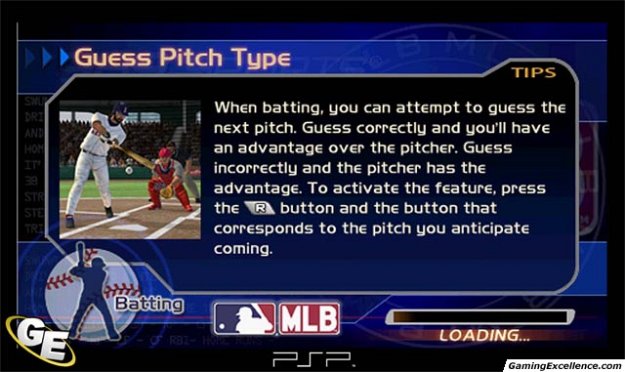 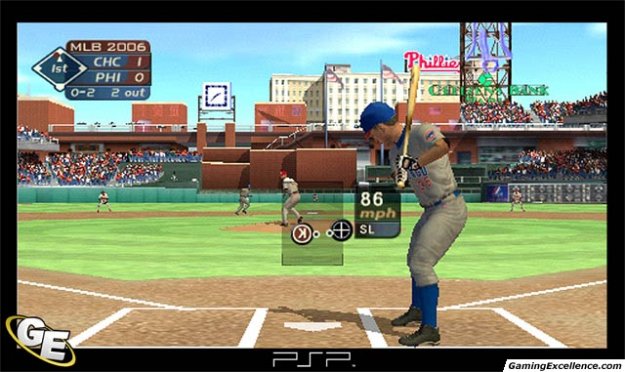 In a perfect world, you'd simply take your PS2 disk, pop it into your PSP and be on your merry way. Your 8 MB memory card saves would be completely transferable and you'd never miss a beat. Unfortunately, things aren't always that perfect. And when it comes to sports games, handhelds have usually featured watered-down skeletons of console versions with minimal modes, unintuitive gameplay, backward mechanics and lackluster polish. The good news is that things are starting to change. 989 Sports has spent a lot of time perfecting their first PSP baseball outing and while it may still lack a few features from its console cousin, MLB is still impressive as hell and the best baseball game on handheld thus far.

The beauty of MLB is that it never really feels like a dumbed-down handheld game. Here you'll find all the sliders, batting/pitching options, stat tracking, stadiums, players, fielding options, micro-management, minor leagues and commentary tracks that you've come to expect from consoles but never found in a portable format before. If you're a fan of baseball games, stop reading now and get MLB right away. For long trips there is no better way to enjoy your favorite pastime.

MLB offers up 3 main modes of play; Quick Game (typical choose your teams and play a game mode), Online (not feature rich, but lag free and the best way to enjoy baseball against friends) and the meat and potatoes of MLB; Season Mode. Yes, unfortunately, the PSP version omits the Career and Franchise modes from the PS2 version but the Season mode is so feature-rich that you may simply not care. Besides the insane amount of customization available (including camera views, three difficulty settings (rookie, veteran and All-Star), errors, throw/hit power, fielding/base running assists, pitch guessing, etc), you'll be able to determine how many games you'd like to play in your season as well as whether you'd like to sim the games, watch them (with excellent fast forward features) or play them. You'll also be able to adjust your line-up, deal with free agency and salary caps (even though trades are handled using an interest meter instead of monetary negotiations) and relish over the impressive amount of stats that MLB keeps track of for every player in the league.

But all the Season features in the world wouldn't mean anything if MLB wasn't fun to play. Luckily, the game is very accessible (after a slight control learning curve for new fans) and includes everything you know about playing MLB on console. From the various pitching/batting options (associated with difficulty), to the pitching meters, batter/pitcher histories, pre-loaded fielding and all MLB Total Control features, the PSP plays like the Big Boys.

On the mound you will have access to a pitching interface that will be familiar to all baseball fans: every pitcher has four different types of pitches assigned to the face buttons, once a pitch is selected, the Total Control Pitching interface grid appears (with hot and cold zones) for you to locate the desired location of the pitch. And once this has been selected, a meter appears to set your power and starting point (ball release/accuracy). This scheme is wholly intuitive and a joy to play. It also adds (with the pitcher/batter stats available by pressing the Select button) the required level of strategy that makes all mound/plate meetings fun. 989 Sports has also added, for the PSP, Pitcher Confidence which determines the size of the "sweet spot" on the pitching meter. Having problems? Maybe a mound visit would help a rookie pitcher regain his composure.

At the plate you will, depending on difficulty and settings, have the opportunity to guess the type of pitch that will be thrown to you. If correct a "lock-on" indicator will appear in the strike zone and you'll receive a power bonus. Now, while batting may seem like a simple timing exercise, Total Control Batting adds a whole new depth to the proceedings by allowing you to influence your hit types as you swing. This will also allow you to trick the defense when they stack the field a certain way due to your statistical tendencies. Tied into the batting scheme is the Total Control Base Running which allows you full control over all/specific runners on base.

The only misstep that MLB seems to take is the fielding. While the controls schemes and pre-loading controls allow you a surprising amount of options on defense, the game suffers from a slight transition between the batting/pitching screen and the fielding screen which is long enough to cost you from time to time. The players also never feel like they are moving fast enough, but that is simply a lack of skill on my part I'm sure. While playing, I actually turned Fielding Assist, Auto Base Running and Auto Throwing "on" and simply worried about my batter/pitcher match-up. I must admit this made the game infinitely more enjoyable for me, but may drive fanatics crazy.

In the graphics department, you can expect players and uniforms that look incredibly detailed as well as stadiums that not only feel alive but which seem to get even the smallest of details right. The scoreboards, the bleachers, the outlying structures, everything seems right. The crowds are well animated but upon close inspection they are simply animated cardboard cut-outs. If the graphics weren't perfect enough, the animations are nothing short of breathtaking, especially the fielders who make some of the most amazing miracle catches. The game-engine also shows picture-in-picture boxes of your bases and unlike most games you won't find much in the animation that you'll want to skip. The presentation is streamlined (no batter up animations, but we just skip those anyways, right?) for a quick handheld experience and gets everything perfect.

How often can you say that a commentary track in a sports title rocks? How about after repeated playing? Well, MLB gets it right. The play calling (by Matt Vasgersian - the voice of the San Diego Padres) and color commentating (by ESPN's Dave Campbell) is timely, accurate and varied enough so that when you decide to pick 3 guys off in a row (it happens!) you'll actually get 3 different variations on the same action. What gets old in a lot of sports game is not the action being called but the "other" comments made (a la John Madden's "too much mustard on that one"), well MLB has stuck to simply calling a game the way it is. This may be due to space limitations, but it actually works in MLB's favor. The game also features 16 licensed tracks from the likes of Papa Roach, Young MC and Theory of a Deadman. These tracks don't really stand out or stay with you after you've turned the game off, but they're unobtrusive and fit in with the MLB atmosphere perfectly.

MLB may not be the perfect baseball game, but it is without a doubt the greatest offering we've ever seen on a handheld and that's saying a lot. If you're a fan of baseball, there's definitely something you will appreciate about taking this one on the road with you; excellent gameplay, lots of stats and graphics that will make you appreciate your PSP even more. A few mini-games would have helped a bit since we don't always have time to play full games, but there's still enough here to keep anyone busy for a long time. Highly recommended.