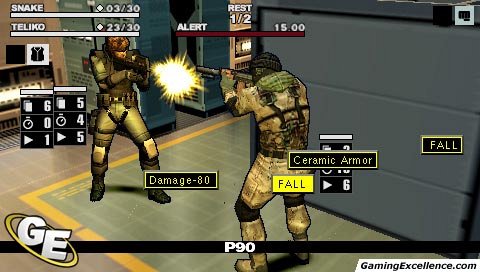 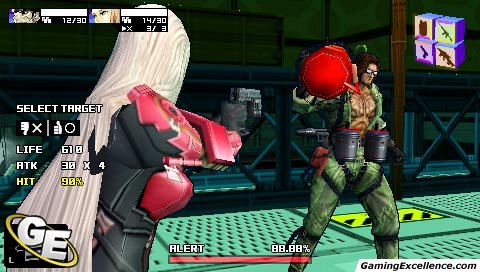 Some well respected, very important men wear funny looking pajamas to bed. I can accept this. It's odd, but no more than some Hollywood pairings we've seen. On a separate note, certain gaming franchises take chances. It's not a common occurrence, but Konami proved that it could be highly successful with its first Metal Gear Acid game on Sony's PSP. What I cannot understand, or accept however, is why a man like Solid Snake, a bad-ass by all given standards, would be portrayed as a flamboyantly dressed boy-scout in the next iteration of the MGA franchise. Yes, the game is still amazing, fixing all but the camera angles of the first. Yes, the game adds a bunch of new gameplay mechanics which create even more depth. Yes, it's faster paced, contains tons of fan service and a good story. And yes, I am nitpicking but still can't get over how truly trippy Metal Gear Acid 2 looks from time to time.

While knowledge of the first game is not needed to play or enjoy MGA2, anyone interested in this title should definitely give the first one a rental since it will not only make this version feel like a cakewalk, but also because the original is an amazing game in its own right. This time around, the story kicks off as Snake and a team of operatives return to the country only to be arrested. Snake, with a bad case of amnesia (what else is new?), is then made to infiltrate a complex while his team is detained. Things, of course, get more confusing from there as more characters enter the story, a new Metal Gear is revealed, loyalties are questioned and the body count starts to rise. Needless to say, things move at a brisk pace in the usual Metal Gear fashion and fans of the series will not be disappointed by this "alternate universe" storyline. And as with the first game, while it may seem slightly off-putting at first to use a card to take a guard out instead of pulling out the Socom and plugging away, the depth and strategy of the gameplay more than make up for it. Remember, this is a strategy game and not a stealth-based action game. Yes, there's still a life gauge, stealth action, cameras to take out, grenades to lob around, but all in a very ordered and organized context.

As with the first game, you start out with a deck of cards of which 6 will be picked and used as your playing cards. Each card is immediately recognizable to Metal Gear fans as lore from a previous game. Each card, depending on its action, also has a cost attached to it. A simple movement card has a relatively low cost in comparison to most weapon cards or those that allow you to generally wreak havoc on a level. The game is a turned-based affair where order of play is based on the addition of cost. During your turn, you will generally (as Snake) play 2 cards. The cost of these are added and compared to the other characters populating the level. As time passes, cost goes down and eventually, you will have the lowest cost again and be able to play. The game feels a little like a chess match where you not only have to manage (and account) for your actions, but the time interval until you'll be able to play again (and what can happen to you during that time).

For those who have played the first game, you'll immediately note how flowing MGA2 is compared to the first. It's also a little more lenient and allows you a lot more options per turn. During a turn, you'll be able to easily crouch and stand back up, knock on walls and continue moving, changing orientation and more which could only be possible at the end of your turn in MGA1. The buttons, interface and such still remain mostly the same, so it's not a hard process to learn the new differences (mostly since they are all to your advantage). Also, if you have a save file from the first game, you'll be allowed to transfer one card over into MGA2 and bump up your points total to buy more cards.

The card shop is also handled a little differently this time around, making it easier to not only purchase, sell and upgrade cards, but also put your decks together in the first place. You'll now also find a lot of MGS3 cards as well as the token fan service cards which offer up some lovely ladies prancing and posing around for you. It seems a little creepy at first, especially with the Solid Eye attachment, but you'll also be happy with the MGS3 movies that were included as well as an extended (and breathtaking) preview of MGS4.

Setting itself apart from any other card-based game out there, MGA is rendered in full three dimensional glory and looks exactly like you'd expect Metal Gear Solid to look on console. As mentioned earlier however, this time around, Snake look a little encumbered by a boy-scout backpack as well as a color scheme which is very much "not" Snake at all. You still have to sneak around taking out (or avoiding) guards and cameras, avoid the dreaded Alert/Evasion/Caution phase and make it to the goal of each stage. In MGA2, you also have to contend with new additions like oil barrels which can cover Snake or a guard or other little environmental additions which play a more important role in the game. During the intermission between levels you'll also get to purchase new cards to build your deck with points earned based on your performance. This is incentive enough to play through each level again and again, using the new level options that MGA2 adds which allow you to play through levels in various ways (stealth, action, etc). A better deck will not only benefit you in single player mode, but also in Link Battle multiplayer games which again are basic, but still a fun waste of time. The main draw of MGA2 will be, for most, the completion of their card deck and this could take anyone a very long time.

No Metal Gear game would be complete without some new characters to add to the fray and MGA2 serves up a bunch of odd ones with their own motives and agendas. As with the first game, you'll eventually be controlling more than just Snake. In the first game, Teliko Friedman was a sassy Meryl-type who had the advantage of using mostly equipped weapons and three cards per turn. This time around, you'll get the well-endowed (though not as much as the doctor you'll meet half-way through) and aptly named Venus as a side-kick who again can use 3 cards per turn. Unlike Teliko, Venus is a really hard, cold woman who reminded me a lot of a cross between Alice Hazel (from MGA1) and Rory Gilmore (on the Gilmore Girls). As with the first game, the story is generally advanced through cutscenes (which don't feel as long this time around) involving mostly static pictures with text over the in-game background. Yes, there is a lot of fan service in these scenes and they are quite hilarious (if slightly disturbing; boing!).

Graphically, the game starts off with lots of odd environments (during the tutorials) which feature lots of light grays and yellows. As the game progresses, you'll note that certain traditional MGS colors seem to have been replaced with odder choices; namely the grays, blues and blacks now lean a little more towards whites, oranges and yellows. The graphics are still amazing, however, and the use of the Solid Eye (which is really just a gimmick since I couldn't picture anyone using it on the bus, or in public, or for extended periods of time) is still a nice addition which makes the movies at least, fun to watch over and over. As mentioned, Snake looks slightly different this time around and the little things we've come to expect from the MGS series have also changed. Gnome soldiers have been replaced with other types of soldiers and such. Still, the graphics are top notch and while the camera is still not as maneuverable as desired, the angles provided always provide enough info to make each move calculated. The audio is also a top notch addition which features recognizable themes and clips along with solid new audio additions.

In the end, Metal Gear Acid 2 does an amazing job of fixing the small quirks that the first game had as well as give gamers more of what they truly wanted. There are more cards this time around, more gameplay options, more modes and more movies to collect. The presentation is top notch, the strategy is still surprisingly deep and it's easy to lose oneself inside the title for hours on end. Any fan of the first game shouldn't think twice about picking up this sequel, and any fan of strategy games should seriously consider picking up either one of these amazing entries. While the learning curve is slightly steep at first, there is a wonderfully deep game inside to discover and strategy fans couldn't ask for a better way to spend their time. An amazing title that is highly recommended.