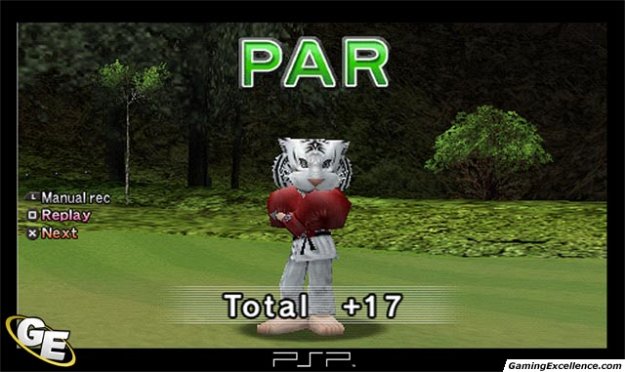 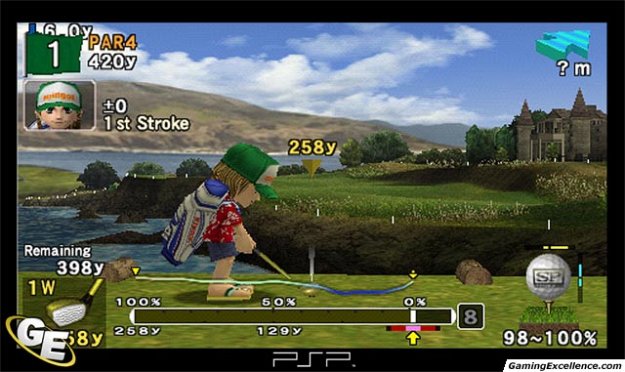 There are 3 types of people in this world: The ones who like their golf cuddly with realistic physics (a la Hot Shots Golf), those who like their golf realistic with arcade physics (a la Tiger Woods) and then there are those who simply don't care about golf at all. If you're reading this review it's because you clearly fall into one of the first two groups and oddly enough, no matter what reviews will state about either, you probably have your mind made up as to which one you'll invest in. And that would really be too bad because you'll be missing out. The PSP may not boast a lot of RPGs or FPS, but one thing it does have is two very capable golf games that can be appreciated for two very different reasons.

Hot Shots Golf: Open Tee is everything the console version is plus a little bit of something new to keep you playing on the go. In the end, you may even prefer this version to any you've tried before. From the main menu, you'll be greeted with the typical choices: single-player golf, multi-player, data, options and the save/load/delete screen. But don't be fooled, there's a lot of nice additions to Hot Shots Golf within each mode.

From the single-player menu you'll be able to play stroke play, challenge mode, training and putting challenge. Stroke play will be nothing new to any golf aficionado; you simply pick a course and play a free round of golf alone where you will still accumulate experience points. You'll still have a few options available as to the course you're playing and you'll still be able to customize the character you're playing with and his/her equipment. Challenge mode is the true meat of the game, allowing you to take part in various tournaments against CPU opponents all-the-while unlocking costumes, characters, gears and other surprises. Here you will find yourself playing in full 20-man tourneys as well as one-on-one match-ups against other characters. In both of these modes, your stats will be kept for later analysis and you will also be accumulating Loyalty Points with your selected character which will net you some special shot types as well as a few other interesting rewards. You will also be advancing in rank and experience which will open up more content of the game.

Training mode is simply that: a mode that allows you access to a golf course with any unlocked character, set all the options you desire (wind direction, weather, etc) and practice to your heart's content while giving you unlimited do-overs. While you may not unlock anything new practicing, you may discover new ways to get around the greens as well as determining if the new clubs/balls you're using are really to your liking without affecting your stats. Putting challenge is a great mode that will keep many a golfer busy. You are transported to a green where you will be given a choice of holes to shoot for. Each hole (there are initially 2 but each time you win the round there are more added) have different point values and difficulty levels and you must try to putt each ball in the hopes of beating the putting challenge score for that course. This may sound easy, but the putting in Hot Shots Golf isn't as easy as in other games and putting challenge mode also removes a few of the helpful guides. You must really be at the top of your game to excel here, but it will help your short game considerably once you hit the greens in challenge mode later.

Multi-player golf lets you play against 7 others using the PSP's Ad Hoc LAN functionality. Unfortunately, and this may be the games biggest oversight, it doesn't support multi-player golf over the internet. Still, you will be able to play in quite a few modes of golf including: match play (one-on-one golf, 3 to 18 holes), tournaments (stroke style game for up to 8 players, using the front/back or entire course, with simultaneous play) or the always-exciting putting challenge where you will play to accumulate points against one opponent. The multi-player aspect of Hot Shots Golf is capable, but one can't help but feel like the lack of true network play hurts it considerably. The ability to configure some tasty rules (giant cups used, no backspin enforced, crazy gauges, etc) does add spice into the mix though and the ability to taunt your opponent is always welcomed.

The golf itself in the Hot Shots Golf series has always been a very realistic one. Although you still use the 3-button press golf swing (it is possible to select an auto-impact mode as well which is easier) you will never be able to add spin while the ball is in the air like the "other" golf series on PSP. For purists, HSG has always been a true-to-life representation of the sport where lie, wind and weather have always been a real threat. You will not only have to take many factors into consideration while making your shot, but you will also have to master the swing meter which can take the starch out of even the best players around. Tiger's swing mechanic may be revolutionary in many ways, but the Hot Shot Golf swing meter's fun lies in its unpredictability. A simple false press and you're playing from the rough. As expected, you have all the functionality of the console version (zooming in, rotating the camera, etc) and the controls are perfectly accurate as well.

Make no mistake about it; Hot Shot Golf may look cute and stylish on the outside, but it is a real beast to tame. At the higher levels your opponents will pose a real challenge and you will have to replay each tournament several times in order to move on. But rest assure, the learning curve gradually eases you into the fray and you'll never feel like you are completely out of your league. The other saving grace (and one that has always annoyed me about HSG 1 for the PlayStation) is that you can skip all your opponents animations as well as your own. A full round of golf takes less than 20 minutes to play which very good for those on the run.

The greatest testament to Hot Shot Golf's graphics is that they are completely on par with the PS2's latest installment For all the cute-sy anime character designs, you will find a game that loads incredibly fast (especially between holes - Tiger's main point of contention) and one that has stunning courses to play on. The mountains and skies are almost photo-realistic and the various in-game animations will leave you smiling. The sound also retains the bubble-gum flavor of the graphics, offering a pop-y blend of piano and synths. Fans of the series will instantly recognize the various themes of the series and feel right at home. The voice clips for each character/caddy are all very decent and not overly used as in previous installment. Yes, you will eventually grow tired of a few quips or songs, but you can always turn them off of lower the volume.

Hot Shots Golf: Open Tee is quite possibly my favorite installment in the series so far. Although I still remain a bigger fan of Tiger Wood's Golf on console, Tiger's load times and swing mechanics on handheld have really left a lot to be desired. Hot Shots Golf truly steps up to the plate and delivers a game with the depth we've always come to expect from the series but always lots of replay value and customization to be done. There are so many characters, costumes, gear and courses to unlock and the gameplay is so addictive that it's not impossible to play this game until a second PSP installment hits stores, whenever that may be. Hot Shots Golf is without question the best golf game on any handheld right now and even die-hard Tiger fans can't deny how good it is.