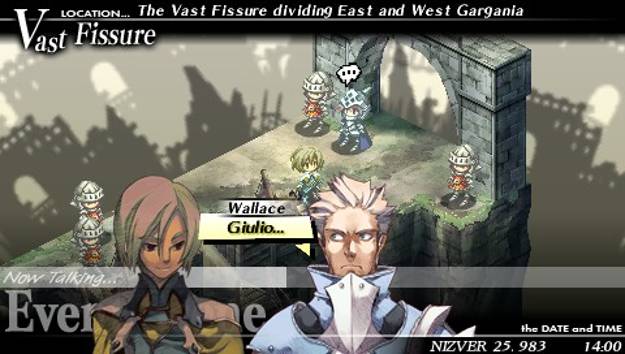 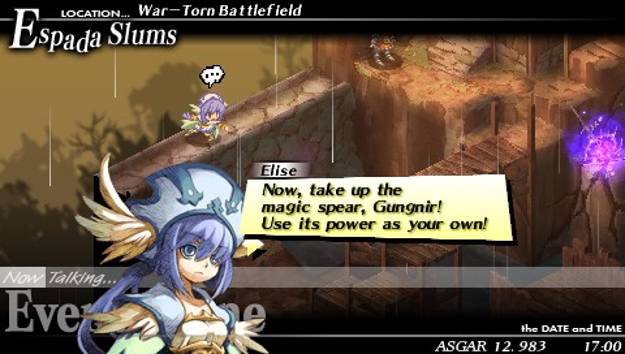 I have played a number of tactical strategy games over the years, numerous titles that combine mechanics, invent some of their own, and use ideas that I've yet to see in other titles. So when I say that Gungnir is one of the most obtuse tactical games I've played, believe me when I say that I do not give this title lightly.

Developed by Sting, who is somewhat known for their risk-reward balance that they use in most of their games, Gungnir is a turn-based tactical game where you control a small squad of soldiers as you try to fight off the Empire that threatens to crush you. At the same time, you must find the secret of the spear that has been gifted to you from the heavens, allowing you to take down opponents with ease. The story isn't great, and moves slowly.

What this equates to is a string of missions that have you face various opponents, getting stronger, better equipment, and hopefully learning the obtuse mechanics of the game as you do so. See, Gungnir does a lot of things differently that took me some time to wrap my head around. Simple things, such as the peculiar turn order of the game (each enemy has their own turn, but then your party has its turn, but only one person, unless they just went, in which case they can go but will face a lowered maximum health), or slightly more complicated things, like how your characters get stronger by using certain attacks on certain weapons, all start to pile up on the gameplay.

It's not that it's particularly hard to understand, it's just that the game doesn't do a great job of explaining it all, even through the tutorial. Even worse is the status screens of any of your characters, which is a jumbled mess of numbers, abbreviations, and icons that mean nothing since there is no way to see what is what.

I'm sure a veteran of the game can look at the symbols scattered around the screen and know what's going on, but that'll take some time to get used to. A couple hours into the game and I was still trying to figure out why certain weapons made me stronger and others didn't. The lack of a manual with my review copy did nothing to help matters. The in-game tutorial didn't do much to help either.

So, a big part of the game is something called your Tactics meter. This, a numerical value, goes up as your characters move and goes down when you perform certain actions, such as jumping ahead in the turn order or using particularly powerful attacks. It's a big part of the game, as it raises the attack power of certain weapons (some weapons rely on the amount of Tactics you have, some don't) and lets you pull of other moves like Boosts and Beats.

These special attacks allow other teammates to take part in attacks that you're performing, either by upping a particular stat of your attacker before they pull of their move (Boosts) or by simply following up the initial attack with a quick attack of their own (Beats). Get a group of units surrounding an enemy with a high Tactics score and you can do more than double your damage output in a single hit. You can also change how many Beats or Boosts you perform in a menu that gave me a headache just looking at it for the first time, which is important since you only want to perform the attacks if you must, and not waste Tactics points.

Between battles you get the chance to purchase and sell items, perform alchemy to improve your items with crystals earned from the battlefield or other items, and recruit new units. There's a decent chance that you'll be spending as much time in this menu as the combat itself, trying to get the best weapons on the best guys, improving your weaponry, and judging which people are best to add to your team. It can certainly change your strategy wildly when you give a new tome to a healer and start the next battle before realizing that the healer needs to use the tome a few times before he or she can actually use the healing ability tied to it. 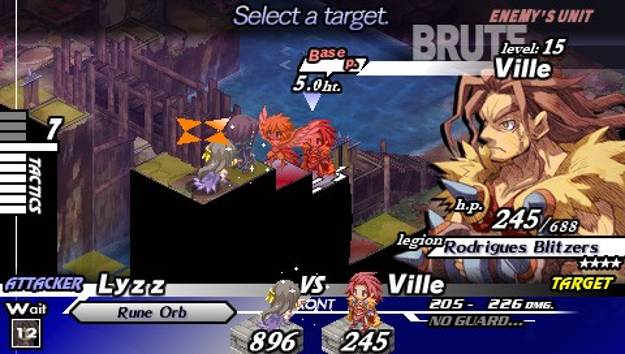 Gungnir, as a whole, is a game that seems like it gets bogged down in its own mechanics. There are those that enjoy a hardcore strategy game, and this game might be for them, but for others who want something a little simpler, there's just too much to keep track of. Your levels, your mastery levels, your weapon levels, your Tactics, your crystals, your weapon improvement levels, and so on. Each battle becomes an arduous task of trying to balance everything at once, and it can often get in the way of enjoying the game itself. At the very least, if you fail, you can retry the mission and keep all the experience and such you've already earned (though at a cost to your grade at the end, which doesn't really matter except for a couple items in the next mission).

I started to find that I wasn't enjoying the game after a while. I often like games like this that offer a variety of layers to their gameplay, but sometimes too much is too much, and I suspect a wide percentage of tactics fans will feel the same way. The game isn't bad, but it's clearly a title for very specific fans of the genre, those that find the number management to be as strategic as the choices you make in battle. If you think that's your kind of game, by all means check out Gungnir. For the rest of you, however, the genre certainly isn't an empty one, and there are definitely other titles that I would recommend. Check those out instead.