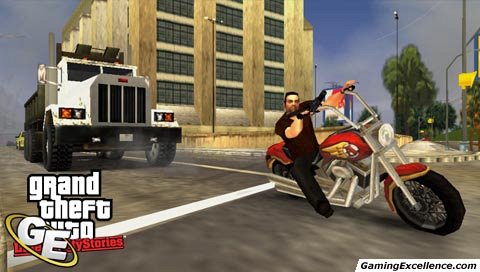 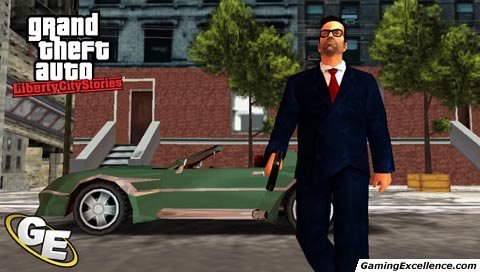 Grand Theft Auto fans can finally take their hooker-clubbing, gun-toting, crime-spree action on the run, with Grand Theft Auto: Liberty City Stories on the PSP. It essentially takes the series' well-known formula of a sandbox-style form of gameplay, and brings it to the handheld.

Anyone who's ever played a Grand Theft Auto game will know exactly what LCS is all about. You, Toni Cipriani, a small-time criminal, must rise your way through the ranks of crime, taking over Liberty City. Yes, Liberty City. If you've played Grand Theft Auto III, you'll likely find this exceedingly similar in location, as it takes place in the exact same place, albeit prior to the events of GTA III.

The real allure that arises from the series is the open gameplay that it presents to you. An entire city present to you (or, at least, as you eventually unlock portions of it), allowing you do run around doing what you wish, has always been the most fun of the game: leading cops on chases, going on a spree throughout the city, or finding that special 'lady of the night' to 'raise your health' if you know what I mean. So it's no real surprise that the formula remains unchanged in LCS. You'll find no surprises, no new features, and no new challenges.

Maybe that's the biggest problem with this game. You won't find anything different in the single-player game. I am a big fan of the entire series, and with each new installment, I look forward to what will be changed in the game, what will be added, and what will be completely new to me. In LCS, however, it feels more like the series has taken a step backwards. Gone are many of the features from San Andreas, as well as a couple from Vice City. Going from those games to this makes it feel like thin and sparse in nature. It's like plugging in GTA III (with bikes, they kept the bikes), after some San Andreas.

Now, yes, obviously this is due in part to the handheld nature of the game. I know that not everything can be crammed onto the UMD. But then there are problems that also result from its handheld nature. First of all, due to the small nature of the screen, many important details are difficult to work out, such as whether or not that person you plan to hit is a cop or not. Or who the heck to appear to be shooting at. Or whether that thing in front of you is a wall or a hedge.

Then there's the issue of the controls. I've brought this up many times in PSP reviews, but this analog stick just doesn't do its duty. In LCS, the thing is twitchy as hell, and can easily spell your destruction when you're trying to chase down a biker through a narrow alleyway. And when you're running around, it's even worse, causing your character to spin in circles as the horribly-slow camera struggles to catch up. There's an option in the controls to switch to the directional pad for movement, but this is even worse, forcing you to stop to turn whenever you want to change direction on foot. The targeting system is pretty annoying too, since half the time you can't quite see what you're looking at, and with a combination of that and the analog stick, you're just as likely to hit some bystander as you are to hit your target.

What surprised me were the excellent load times. There are not too many, unless you take on a mission, and those that are present are short and sweet. It's a wonder that other games can't follow suit. Though, occasionally there is the odd hiccup here or there that last split-seconds, but they're few and far between and are far preferable to a long wait beforehand.

The high-quality audio is also back in the form of radios and excellent voicework. Some might not like the reduced playlist size on the radios, but you'll be glad to know that you can use the media functionality of the PSP to put in custom songs. It's a shame though; I really wanted more of Liberty City Free Radio. Ah, to be back in the day of "Pressing the Issues, with Maurice Chavez!" But I digress.

There's also a multiplayer aspect of the game, a group of competitive modes that involve everything from blowing up limos at your opponents base while protecting your own, a mode where you try to blow up the person in the tank, or even a mode where you must transport a series of vehicles to a shipping location for cash. The modes are fun and inventive, and it's a relief to not have to experience the same deathmatch, team deathmatch, and capture the flag modes all over again.

There are bugs, too. Mostly clipping bugs, but my game did freeze up at one point. I've fallen through floors, ran right through a wall, got out of my car and found myself twenty feet away, and a variety of other problems. None of these are game-killers, per se, but they're annoying as hell and are out of place in the quality that a GTA game usually shows.

Well, it is portable GTA, simply put. But it feels like the gamers are forced to make tradeoffs in order to take their criminal spree with them as they go, like bugs, draining batteries, and dated graphics and textures. Maybe it's worth it to some, but for me, I'll stick to the consoles for my car-jacking action, thank you very much.