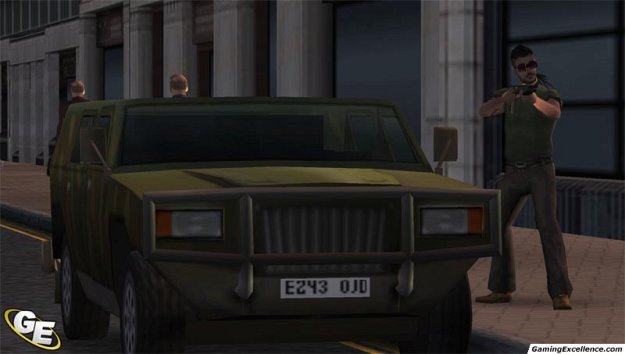 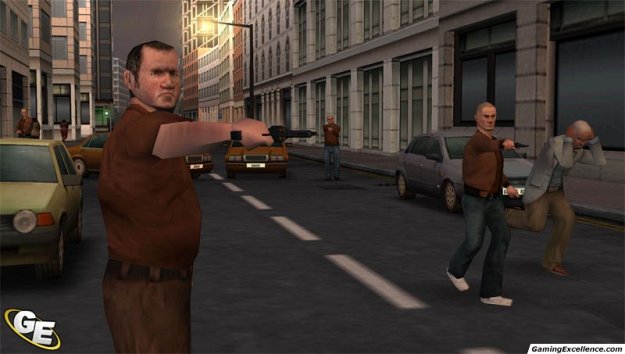 Gangs of London on the outside looks a lot like something you'd expect from a company like Rockstar, it has all the feels of a free-roaming game like the Grand Theft Auto series, with a few new twists. However, this one isn't nearly as much fun. Developed by SCEE's London Studio, Gangs of London suffers from poor planning, repetitive missions, and mundane gameplay.

Poor execution actually ends up making this game less than the sum of its parts. Initially, I felt kind of let down by this one because it hinted at "an epic story set in a non-linear environment". What I got was a game with several modes, one of which was a story mode, one of which was a free roaming option. Apparently, in the Gangs of London, it's somehow better if they're mutually exclusive modes of play, but don't bet on it.

Free roaming lets you scoot around a suburb of London in car or on foot. Players don't get missions in this mode, and pedestrians apparently have super human abilities (that I'll address later). The point is, you can't peeknuckle them off the hood of your ride. There are no radio stations, you can't do tricks or side missions, you can't engage the police in battle. About all you can do is to drive into areas of London that you haven't overtaken in story mode to instigate some pretty lame gang battles. You do have the ability to customize the weather, traffic and pedestrian congestion, which is kind of cool. On second thought, not really. There are a handful of other mini games such as a Speed style game in which you can't slow down or your vehicle will explode (sound familiar to speed anyone?), one in which you try to escape the police in a vehicle, or simply shooting a predetermined amount of zombies (how this fits in I've yet to discover). There is a crazy taxi style game, and one in which you are a tourist taking pictures of popular landmarks in London. Then you have the Pub, where you can play an assortment of really mini games like darts, pool, skittles, and a few arcade games. It's worth pointing out again that these are all separate modes of play, and I can't help but compare it to a certain other series that seamlessly integrates all of these elements into a vast, interactive non-linear game environment. The fact they haven't done this with a game of this type is a huge fumble.

Accepting that, I decided to get into the story mode which I must admit was kind of enjoyable at the start. The presentation and concept are interesting, but inevitably fall flat. You first choose which of the five gangs you wish to play as, and then you accept a mission from a map of territories in London, some of which are yours and some of which belong to the enemy. After choosing your mission you are then treated to Max Payne style graphic novel screens that help to set the stage for the mission you will attempt. I genuinely liked the presentation in the lead up to the mission, which was good enough to trick me into anticipating a good story. I was ultimately disappointed because there is no such story to speak of. Essentially, the missions represent a series of disjointed tasks that don't relate to each other, never lead anywhere and affect nothing more than taking over enemy territory. Even worse, the mission objectives are extremely repetitive and fall into three basic categories: attack an enemy, defend against their onslaught, or escort some VIP. Suffice it to say that upon enduring multiple missions alternating between ramming some enemy off the road, attacking enemy territory or defending my territory, I just got really bored, really quickly. The story missions contain no character or plot development to speak of, which is a shame because I might have been able to live with the bland game play a little longer if there were a compelling story to see through to the end. As it stands there is little incentive to complete the story mode beyond trying to get new weapons and character level ups.

It's hard to tolerate the gameplay for a long period of time. The game controls are spastic when on foot. The analog stick vagueness makes it next to impossible to be accurate when trying to shoot enemies manually. Luckily the game offers a supposedly easier aiming scheme in the form of a lock on feature. The problem here is that it doesn't target the most dangerous enemies in your line of sight, which are generally the closer ones. You'll be clicking that shoulder button trying to line up buddy with the AK right in front of you, hit the auto aim button only to find that the enemy behind him with a bat takes priority. Needless to say, most firefights are an exercise in frustration and require a measure of luck to come out relatively unscathed. The digital pad allows players to command up to three other gang members that are supposedly there to help in battle. They end up doing the enemy more good given their propensity to run right into your line of sight and take up a defensive position. You can switch between the multiple members of your crew which really only adds to the confusion of auto targeting, commanding, and generally just trying to survive when the bullets start flying.

The driving segments don't fare any better, generally feeling sluggish and unresponsive. No funny entertaining physics here; just the sensation of having a car chase under water complete with slow motion crashes occurring in real time. I was puzzled by the inability to hit pedestrians with my car. Try as I might I could not cleanly connect with a single one. Hitting a pedestrian square would cause a sound glitch of sorts followed by the NPC consistently ricocheting off the hood of your car with a really dissatisfying, spastic twitch only to then run away unharmed. I'm not sure if this is a design decision or just a horrible glitch, but in either case it's a huge oversight.

Similar issues plague the stealth elements in some of the missions. NPC's have eyes in the back of their heads and will turn around and shoot in some cases even if you crouch and sneak up behind them like the game instructs you to do. I'm not expecting cutting edge game play, but at least refine the controls and AI to playable standards. Some of this may just be due to the limitations of the PSP, but it doesn't feel a whole lot different that other games in this series that suffered from similar issues. For instance, it seems like a small detail, but there is nothing that takes you out of the context of a car chase with police like your turn signal coming on to indicate your next move as you try to escape. Of course this is explained as "the games way of helping you find your destination." I've got a map, and I know how to use it.

I've played a number of PSP games with significantly better sound effects. The audio for Gangs of London is adequate, but ended up sounding very hollow and low rent. Even after I cranked the volume on the PSP I had trouble hearing the dialogue and the game sounds. The graphics are just about the best thing this game has going for it. I had a couple friends comment that this was a nice looking game and I tend to agree. Vehicles and surroundings are pretty nicely detailed and the character models are nice to look at even if they animate in a jerky fashion. The graphic novel cut scenes are really slick looking, which again, is a shame because it would have been nice to see some semblance of a story play out using those.

What really stands out with Gangs of London is how much better it could have been. There are brief moments when it shines as a fun little portable title, but those moments only occur in very short bursts. Any amount of time spent with the game will likely have players frustrated by the mind-boggling linear format in light of its competition as well it's technical shortcomings. I can hardly suggest a weekend rental.