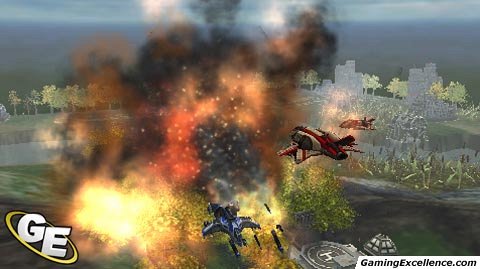 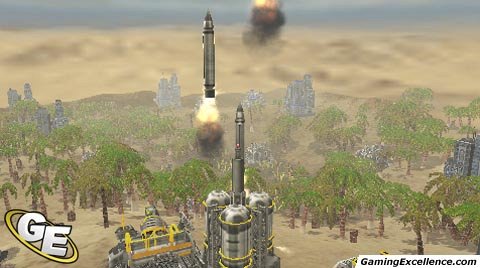 While it's hard not to get giddy at the prospect of playing a solid turn-based strategy game on the PSP, those who have owned a GBA or DS will soon recognize the trappings of Advance Wars. Yes, imitation is the sincerest form of flattery and Field Commander does more than just borrow a few concepts from the amazing Nintendo franchise. Field Commander also tries to put its own spin on a few concepts, adds more of a community feel to the game and upgrades the graphics. And while it doesn't best Advance Wars in any way, it is still one of the best reasons to pick up a PSP while on the go.

Global terrorism has become such a large operation that governments no longer know how to contend with it. Here's where you come in. You have been recruited by ATLAS (Advanced Tactical Legion for Allied Security) to put an end to terrorist activities, that is all completely deniable by its funding governments. How much more fun could you ask for? You get a bunch of high-tech toys and you're free to use them as you see fit. And while the story is simply the glue holding the single player missions together, it is quite engaging.

The game begins with a tutorial which briefs you on the three methods of warfare (land, sea and air). While each type of environment has its own trappings, the basic gist of the gameplay is the same. And here's also where you'll see the AW influence. Your instructor will be a female officer named Shellcase. She might talk a tough game, but you'll yearn for Nell. You'll also note that Field Commander is more based on the interaction between units (rock, paper, scissors relationship) rather than how the environment affects each unit. You'll also realize quickly that the graphics have a realistic look and that battles are fought in real-time. There is something quite satisfying in seeing an enemy explode into pieces after a particularly well thought out salvo knowing that his next move would have cost you a unit.

As with the AW series, Field Commander features different divisions (much like the COs) that affect the way the battle will play out. Some divisions are more aimed at defensive battles while others are for out-and-out assault. Each also features its own unique division power which much be built up before use. If this is starting to sound familiar, it is. The gameplay follows the AW series (movement limitations, COs, producing units, re-fueling, visual cognizance, ammo, range, building capture, end-turn moves, unit joining, boarding transports, repairs, etc) down to a tee. The only real differences are as follows: the graphics are fully three dimensional and rendered in real-time. This makes battles exciting, but some units are also a little bland looking. The various divisions have more personality than the COs themselves. The game feels more like a chess match between units (their placement and their turn) than AW (which took into account terrain a lot more). Buildings also play a greater part of Field Commander and the gameplay seems slower (although you can disable enemy turns to speed things up). For my money, I also preferred the variety of missions in the AW series over FC's which seem repetitive.

Where Field Commander truly shines however, and where it distinguishes itself completely, is in its multiplayer offerings. If you have access to friends with a PSP or to a wireless router, the game opens up greatly. From leaderboard rankings, making and uploading/downloading new maps and missions, and multiplayer games, this is where FC shines. To play against a friend, you can use the Hot Swap mode in which both players take turns on the same PSP, you can also use the Ad Hoc mode (where two PSPs are required) and connect to the internet to find a friendly game in an online lobby. If these modes weren't enough, you can even play FC in an old-school transmission mode which mimics the chess-by-email games of old. These may be a lot slower, but they give you time to think them through and you can engage in a few at once. The Field Commander home page also keeps track of players and leaderboards and really gives the game a sense of community and ownership. And while the single player offering seems "been there, done that" a bit, the multiplayer is one of the best reasons to own a PSP.

Graphically, Field Commander is a hit or miss affair. The animations, battles and terrain (including trees and buildings) look really good, but the units themselves sometimes feel bland and without detail. The interfaces are all clean (and informative) and the mini-map is quite welcome. It should be noted that there are a few slow-downs here and there when the game seems to think about what's happening next a little too hard. The audio is fine but nothing more. The voice work has a serious tone (versus the obvious playful tongue-in-cheekiness of AW) and while competent, isn't as fun to listen to. The music and sound effect are all generic but more than adequate.

At the end of the day, it's still easy to recommend Field Commander to any strategy nut who've never had the pleasure of playing the Advance Wars series, those who just want more of the same and finally to any gamer who enjoys the threat and challenge of great multiplayer gaming (with forethought). Field Commander may imitate a lot, but its little differences are enough to separate it and show where its heart truly lies. A good (and lengthy) single player experience with an amazing multiplayer mode. For the PSP, a welcomed title.