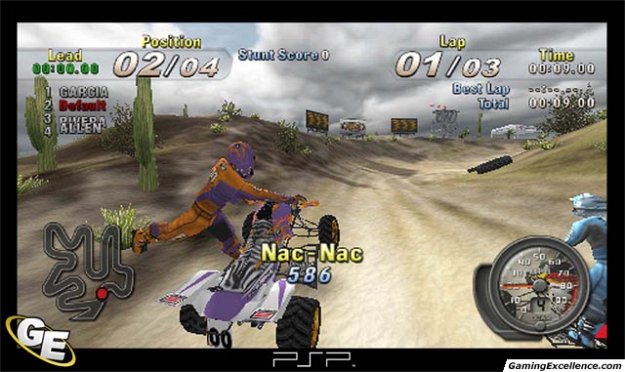 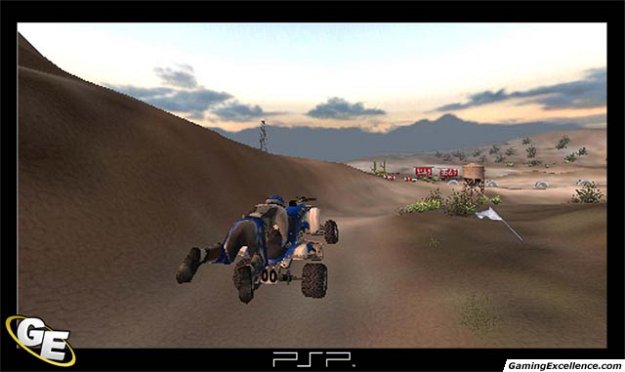 Well made games generally spawn good, solid sequels. And, as a rule, every well-made sequel should add one or two gameplay elements or feature to a series to further it along. But, in the process, previous iterations are rendered dull and obsolete. Case in point; While many believe that the yearly outing of the Madden series only updates rosters and adds more polygons to each character, I challenge you to play a previous version after spending time with the latest and greatest version. It's hard. The changes may not always be major, but little things do add up and I personally feel like previous versions always feel empty; as if there was "always" something missing, regardless of how well much I enjoyed them beforehand. The exception? Sony's ATV Offroad Fury series. From its first outing on the PS2, all the winning elements have been present and each new sequel, for better or worse, seems to have only added tracks, character customization and little tweaks here and there. A more jaded reviewer would conclude that the series is stagnant and has been resting on its laurels, but ATV Offroad Fury has always been so perfectly balanced to play that it's almost unthinkable to have it be anything other then what it is. And now, after 3 sequels on console and countless other ATV games on the market (including the amazing MX vs. ATV: Unleashed) we finally have an ATV Offroad Fury (ATVOF) on handheld. But does it still have the magic that the series has effortlessly spawned time after time on console or does this one get unceremoniously launched from its bike?

Thankfully the core mechanics haven't changed one bit and anyone who's had the pleasure of playing this on the PS2 will feel right at home. Newcomers, however, will wonder at first what kind of fresh hell these controls are all about. While the controls default to the analog stick for steering, the D-Pad may be much easier to use for many. The X button is used for acceleration and the Square button for braking. Reverse however, and you will need this one a lot, is X and Square! The ATV series has always done this and gotten away with it due to the fact that all other buttons are cleverly mapped out to power sliding and trick options. Still, it doesn't make it any easier to use in the heat of a race.

The greatest gameplay element of the series has always been its "preload" mechanic. At the base of a jump, bringing the analog stick back and then snapping it forward before the ATV leaves the ground will "preload" the bike's suspension and allow for incredibly long hang-times allowing riders to perform tricks and also take a moment to optimize and tweak their landing. Mastery of the "preload" is essential in ATVOF, but the sheer fun and brilliance of it makes it easy to learn. And, as mentioned, once in the air, you are free to use the analog stick, the Triangle & Circle buttons and the Left trigger in various combinations to perform stunts.

The game loads quickly, which is a blessing after MX vs. ATV: Unleashed's long load time (even on Xbox) and the game plays quickly. The landing is also a little more forgiving than on console, but for all these refinements, the gameplay is far from perfect. Controlling your ATV will be an exercise in patience for many. While on a bigger controller, with more wiggle room, it may be easier to navigate the bumps and turns of the tracks, the PSP's smaller analog nub isn't as precise or intuitive and it's far too easy to get launched off the track for no reason or to simply take a jump at what appears the correct angle but find yourself landing horribly off-target due to a minor miscalculation. It is possible to correct a bit in mid-air, but expect to land off-track. And a lot. The other major issue is that the bikes feel very large on the tracks and the tracks themselves feel very narrow. The result of all this; it's pretty hard to control these things. Add an A.I. that is sometimes ruthless and unforgiving and you'll soon find yourself swearing like a sailor.

Onto a brighter note; there are tons of things to do in ATVOF. The single player modes alone could keep someone busy for dozens of hours. The training mode (which can also be a little frustrating with its red and green target arrows in the last stages) will get you up and running quickly and you'll be able to practice and learn the tracks in Single Events mode before moving on to the meat of the game: Championship. This mode is a career mode where you will compete in Supercross, Nationals, Enduro, Short Track and Freestyle events in order to win credits which you can then use to unlock some very interesting items from ATVs (and parts) and riders (and gear) to mini games, tracks and music videos.

You will also have access to the garage where ATV junkies will be able to tune and customize their various rides and riders as well as create custom logos. If that isn't enough fodder for your single player fixes, there's also a very capable Enduro Waypoint Editor which essentially lets you create up to three new courses per environment. Using the editor, you can place 50 gates on any course and test drive your track until it's perfected. This may not seem like that big a deal, but on a handheld it's something that was unheard of a few years (or even months) ago.

ATVOF and Twisted Metal: Head-On have, without a doubt, the greatest multiplayer features of any game yet released on the PSP. ATVOF supports both Infrastructure and Ad Hoc Wi-Fi modes allowing you to play over WLANs (using an Access Point) or directly against another PSP system. Getting online is simple and the Login features and status icons really add robustness to the mode. From the multiplayer menu you can also check your online rank, see scoreboards, manage your buddy list and race against world ghosts for top times. ATVOF also allows you to trade/wager your cards (also available in Championship mode) against friends/players in the hopes of unlocking more gear in the Shop.

While it is still quite possible to set up a race to your liking and challenge the online community, you can also play all the mini games that you've unlocked in Championship mode online. This veritable smorgasbord of mini games will keep you busy in multiplayer modes for even longer than the Championship mode will. And that's saying a lot. Here you'll find Tag Ball, King of The Hill, Hockey (you drive the puck into the goal), Treasure Hunt, Basketball, Soccer, Graveyard Madness (or Ghostbuster mode as I like to call it), Beach Tagger, Rings of Fire and Bomb Dodge. Some of these may be a lot stronger than others, but the simple fact that there are so many and that they each use the ATV in some new/bizarre way makes them infinitely playable.

Graphically, ATVOF is a mixed bag. While the riders animate well and anything in the foreground looks crisp and clear, things progressively get blockier and as they creep towards the background. This wouldn't be such a big issue if the tracks were easy to navigate, but couple that with the control of the bikes and the jumps which much be launched precisely and you have the ingredients for chaos. As it is, the game is playable, but it's sometimes frustrating to lose because of the simple inability to determine where you're going next. A little practice and exhaustive knowledge of the tracks does help a lot in this instance.

Sound-wise, this game rocks! While the sound of the ATVs is nothing new, the Jukebox (with its 36 songs) and the ability to customize them to your liking is incredibly satisfying. The songs range from hard rock to metal to hardcore rap, but almost every song in the bunch is a keeper. Sony has also gone out of its way to license top artists to get your blood pumping like Auf Der Maur, Good Charlotte, Joan Jett, Keith Urban, Slipknot, The Distiller (I love these guys!) and the soundtracks biggest surprise; a cover of Cheap Trick's Surrender by Less Than Jake.

There is enough to do in ATV Offroad Fury to fill 2 games, but the real questions is; will you want to play it for that long? The handling is very hard to get used to and deeply frustrating, especially when you know it's the graphics limitations and the controls' precision that you are competing against. For fans of the series, this is a no brainer; this game manages to pack in everything that has made the series great into a handheld version that offer almost unlimited replay value. On the other hand, newcomers may want to rent this one first to see if they can cope with the limitations of the hardware. If they see anything they like, there's always the console versions which are more than worthy of your time and money.