Ape Escape: On The Loose (PSP) 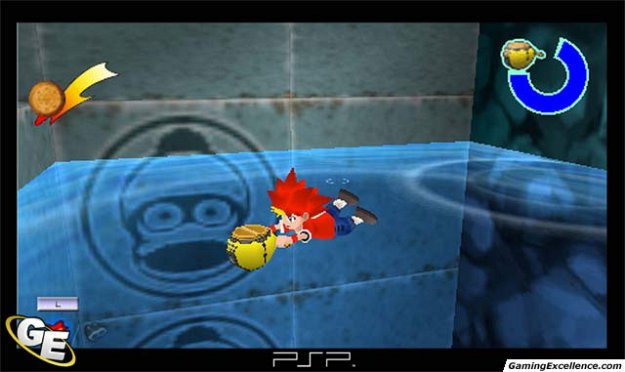 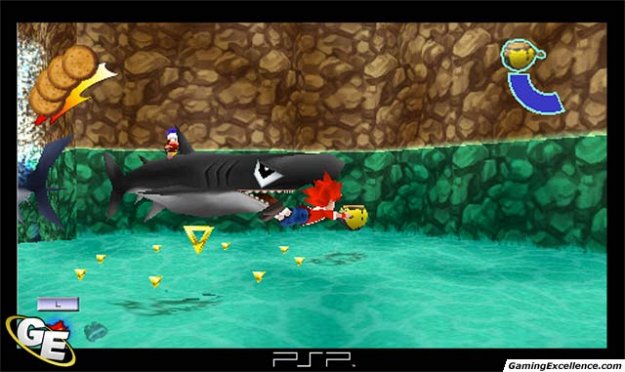 I still remember quite vividly the day my friends and I picked up the original Ape Escape game for the Playstation. I remember coming home and hoping that all the previews I'd read were right. To me Ape Escape looked like a children's game. I was hoping the articles that had previewed the title using words like "innovative and "defining" hadn't led me astray. Was it innovative? Yes. I remember getting 3 calls that night from friends all stuck in the tutorial. The game screen was urging them to "press" the thumbstick "in" and at that time no one knew that the thumbsticks were buttons as well. Talk about the Dark Ages. With that rectified, there were the gadgets to catch the various monkeys (I'm sorry, I've never seen them as Apes!) which were varied and a little entertaining. Was it defining? Hardly. After 2 days, I never played the game again. It was too repetitive, too cutesy, too childish, too inane and too slow for my tastes. It amazed me that successful sequels were made for the PS2. Had I been wrong all this time? Well, when the PSP version was released (a quasi-direct port of the original PSOne version) I figured I'd give it another try. Maybe I'd overlooked it originally and not given it its fair shot. Maybe I'd been wrong for the past 6 years. Maybe I'd been living a lie and missing out on the best darn series out there! Hmmm, nope.

Ape Escape: On The Loose is very much a port of the original PSOne game with a few new textures, a different control scheme, a few new gadgets and a new multiplayer aspect. The story and object of the game have stayed intact. You still play as Spike and your goal is still to clear stage after stage by capturing monkeys run amok in the great hope of capturing uber monkey Specter before he uses the Peak Point Helmet (giving him superior intelligence, duh!) to alter the course of history. Did I mention that Spike is a 4th grader? I suppose that the concept wouldn't be so hard to swallow if the cutscenes that further the story along weren't so painful to sit through. In all cases there is far too much loading for the few lines in which the plot is advanced. Furthermore, the characters are painfully cute and slow (in a childish way that even children can't stand) and say things in the most inane way possible. The Professor (who is just a glorified child in a lab coat) seems no better and I was hoping against hope that Natalie, the 8th grader!, would get her own level in which I would be able to use any gadget available and go hog-wild on Spike and company. Unfortunately, it never happened. But I suppose that Ape Escape, much like the Megaman series, should be forgiven its craptastic story-driven scenes in favor of its gameplay. Well, at least Megaman can.

The first thing you will notice upon entering a new level to clear is the long load time that will ensue. And what will all this loading give you? A level information screen! That's right, all that loading for a simple screen which has the word "Warning" at the top and the amount of monkeys to be captured in the following level. Surely, this screen could have been displayed "while" the actual level was loading, but that would've just made sense!

Upon entering the levels you will note the first glaring omission of Ape Escape for the PSP; a functional camera. Yes, you can press the Left Trigger button to center the camera behind young Spike but if you wish to "actually" follow the action and look around for monkeys, you will have to use the directional buttons to change the camera direction. Sounds easy right? Well, controlling Spike involves using the analog stick, situated right below the directional buttons. So it becomes quasi-impossible to move the camera on the go. A fatal flaw that makes the entire process of catching monkeys insanely frustrating.

And therein lies the other flaw of the game; while the controls were "the" selling point on the PSOne, the lack of innovative ways to use gadgets on the PSP makes this game an exercise in unplayability. You'd think that just flinging a net forward can't take that much skill right? Well, couple that with a camera that doesn't follow the action, monkeys that seem to run faster than Spike and a net that seems hard to predict and you have Ape Excape in a nutshell; a mishmash of good "ideas" that simply fail in execution. And besides, catching runaway monkeys over and over again becomes boring after 5 minutes.

The gadgets that were once fun to discover seem more like a chore now and while the rest of the controls seem well implemented (jumping, crouching, crawling, climbing, etc) the camera makes short work of leaving them useless too. The only bright spot is being able to control vehicles from time to time, even if they are simply a little rowboat and a tank; firing a machine at those darn monkeys feels good.

It's too bad that the camera is so problematic, because Ape Escape does offer a lot (besides catching monkeys) to collect and view. There are training sessions available for all new gadgets, there are Enemy Books to peruse (although these aren't as fun as they were 6 years ago), there are Specter Coins to collect and also a few mini-games to unlock.

If the PSP hardware has proven anything, it's that it's got an amazing screen. Things look clear and beautiful on it and it's usually a joy to see any game in action. Ape Escape, of course, being the exception. While the environments have been spruced up with new, more detailed textures (which still look dated), the character models don't seem to have been touched one bit. They are still cartoony, deformed and unacceptable. Whereas Cloud Strife's spikey hair may have been cool and acceptable in 1997, it's no longer endearing almost a decade later, even if your character is named Spike.

In the audio department, the game fairs no better. The audio can best be described as "retro" or honestly described as "dated". The voice chirping follows suit with the character models and establishes itself as over-the-top cheery and annoying.

Multiplayer-wise, 2 players can play the mini-games against one another using the Ad Hoc mode. Luckily, the mini-games, while not a reason to purchase this game, are a bright spot. You'll find 4 varied mini-games; Snow Kids Racing, Specter Boxing, Jake Attach & Ape Ping-Pong. Snow Board feels a little bit like Mario Kart and while there are tricks to do, it's really a race to the finish. Boxing is fun and takes a little getting used to, but in the end might not hold your attention for very long. The Jake Attack levels are the same from the single player game but can be played with two players (one player as Spike and the other as Jake). And while Ping-Pong may be the easiest game of the bunch, it may also be the most enjoyable one. The only drawback to the mini-games is that you have to trudge through the single player mode collecting Specter coins to unlock them.

It's truly a sad state of affairs when so much work has been put into porting such an archaic game to the PSP; especially one that could never have made the transition smoothly due to the control differences. If quality platformers were needed on launch day, the Spyro, Jak, Ratchet and Crash series should all have been considered before this abomination. As it stands, there is nothing to recommend Ape Escape to anyone but those sorry souls seeking self-punishment or the truly nostalgic out there who simply "must" have all things Ape Escape related. If you still doubt the level of wretchedness that Ape Escape reaches; my wife wanted to try it out because of the title. She played it for 15 minutes and started swearing like a sailor, and my wife doesn't swear. Avoid this one at all cost. You're welcome.