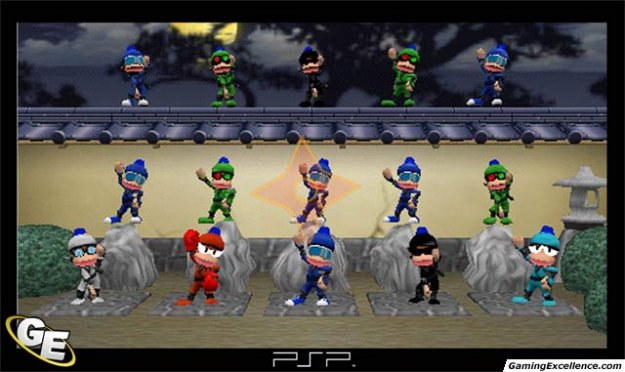 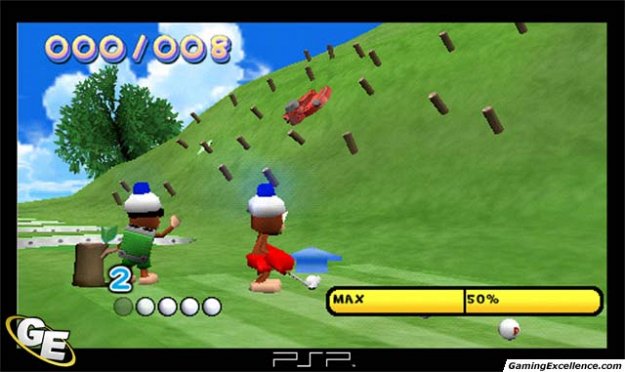 I'll come right out and say it: Ape Escape Academy is the worst game I have ever played for the simple reason that it's insulting in every way. There are many bad games out there, but deep down inside each one, you can see the group of intelligent people who worked on them and the ideas they were trying (in varying degrees of success) to implement. Yes, some don't come together particularly well, but at least there's a glimmer of hope in even the most unplayable games. Ape Escape Academy however, decides to steal concepts from other franchises and dumb them down in a hodge-podge of a mess that will make even those who can justify bad purchases with witty euphemisms angry. Well, it's got nice cute monkeys in it, so I guess it's an okay game, right? Wrong! Get your head checked. Ape Escape Academy is a hunk of crap and if you know anyone who enjoys it, assume that they've been cloned and replaced with lesser beings who haven't been on earth long enough to know better.

The back of the packaging will have you believe that there's an air hockey game, a soccer game and a bowling-type game somewhere in there to be played. You'll mistakenly assume a cross between a Mario Party and a Super Monkey Ball game and think you've found heaven. You'll drop your hard earned cash for it and think wow, all this plus 42 other great games. I should buy a lottery ticket! You'll open the game and see the colorful booklet and flip the pages thinking that not only do you get 45 great games to play, but also a lot of items to collect, grades to master, multiplayer modes and a nifty story to tie the whole thing up. Well, get ready for disappointment. Specter (if you don't know the name, consider yourself lucky) wants to whip his monkeys into to shape by sending them to the Ape Academy so that the instructors can make "Apes out of them" (wow, I can think of someone else who needs to go back to school - Monkey is to Ape like Apple is to Orange). You're stuck attending for 6 years in which you'll play 9 games (per year) in the hopes of filing a tic-tac-toe board with successful checkmarks as opposed to failures. Whoopee! Fail badly enough and you have to repeat the whole year. And if you're really good, you can unlock a few hundred monkeys that all look the same. Double Whoopee. Talk about the most exciting unlockable content since the last Ape Escape game.

If the concept hadn't already been done and the loading for each game wasn't so long, and the games themselves weren't so mediocre, and the tutorials actually taught you a thing about the games you were going to be playing, or if the games were actually fun, or fair, or good, and the graphics were anything special, and the controls weren't sluggish, Ape Escape Academy would still be just a pedestrian game. As it is the individual games last anywhere from 3 seconds to 60 seconds and you'll spend most of that time equally wondering: who quality tested these games and does anyone actually test them to see if they're fun? The games range from awful (DDR/PaRappa-type sing-a-longs, flower distribution "game", arrow blocking fun-fest, etc) to so-god-awful-you'll-wish-you-could-get-those-seconds-of-your-life-back (guess the obscure country's flag, math made stupid by morphing the equations game, sluggish controlling soccer game for masochists, crap-tastic balance-the-monkey to the finish line races, etc). The games will leave you feeling mentally superior (and cheated) in one instant and in a state of deep-seated hatred (and cheated) in the next. The tutorials are uniformly bad (and unhelpful) and no amount of fun, in any way, shape or form, is ever generated from this turgid mess.

This is a game concept that could have easily worked if a few simple concessions had even been considered. If putting together a collection of mini-games was the aim, why invent dim-witted new ones? A portable minesweeper game here, a good mini-DDR game there, a bowling game here, a true air-hockey game there, drop the "grade" pretense and just offer up good games that last more than their loading times. Have good play mechanics as well as detailed tutorial screen, real multiplayer modes (instead of sharing a PSP or playing a "few" games online) and drop the entire monkey association altogether. And why must everyone sound in need of a laxative? The PSP has proven that it can handle complex 3D games that require time to play, but as a portable system, it has yet to prove that it can handle 2D, quick-fix type games that can truly be played on the go. Ape Escape Academy is definitely not the answer.

In the end, Ape Escape Academy is a game that leaves me at odds with myself. Make no mistake, it is a god-awful game that should never be played, but at the same time, it leaves me with two distinct feelings. On one hand, I feel sorry for the people who worked on it. Talented people obviously worked on the art, the coding, the various game aspects, etc and even though I know they were compensated for it and did the best they could with what they were given, the game is not a great representation of the talent involved. On the other hand, I feel very angry; angry that I had to be subject to this game, angry that I wasted moments of my life on it, angry that a game devoid of so much intelligence can even be made in the first place. But mostly, angry because many people (consumers, gamers, grandparents, etc) will buy this game based on name-recognition or the packaging or the inclusion of monkeys or some other misguided reason and they will feel like they have been cheated. It's a rare feeling with video games (unlike movies) to feel so completely ripped-off, but Ape Escape Academy is that kind of game. Avoid this one at all costs. And if you by chance already own it and are looking to justify your purchase by reading this review, well, sorry. It's got monkeys in it right?