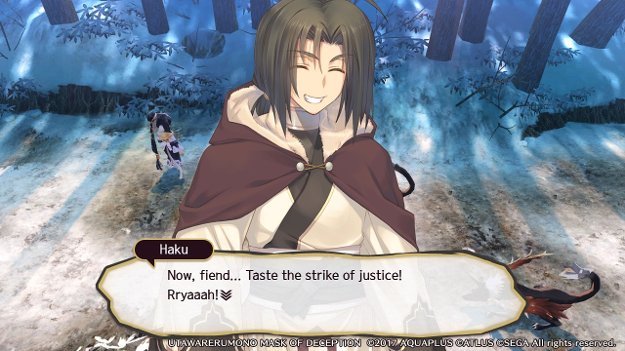 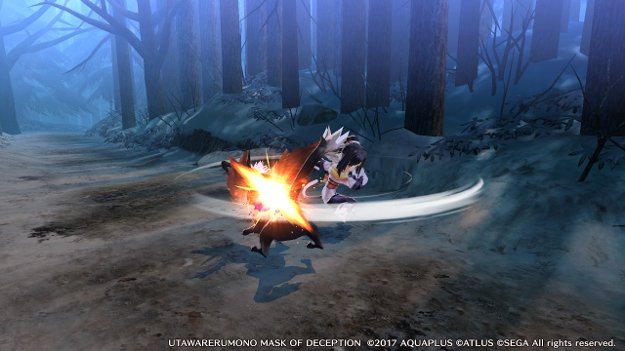 Technically (though very loosely) a sequel, Utawarerumono: Mask of Deception, tells the tale of a young man named Haku, who has lost his memory and wound up in a snow-covered mountain. Found by a young woman with cat ears, he adventures around, meeting people and fighting others. Though itself as a tactical RPG, the game is really a visual novel that just happens to have a few battles scattered throughout, often with multiple hours in between them. So, if a tactics-based experience is something you're looking for, then you're going to want to avoid this game. If a strong story is what you're looking for...well, you might want to avoid it anyway. 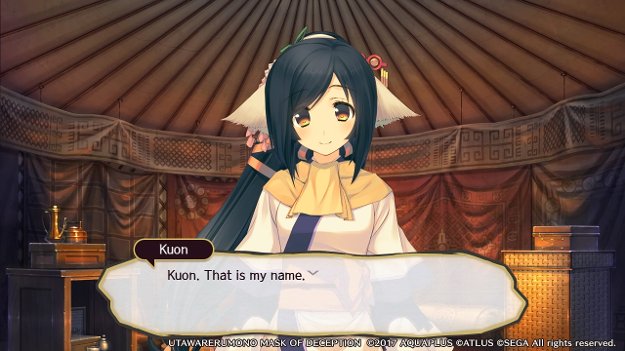 I can't lie and say I've played a plethora of visual novels, but Mask of Deception certainly ranks low on the list. Dialogue and situations feel extremely forced and drawn-out, taking much, much longer than many of them need to. In addition, many of the scenes in the first place often feel like filler - it was perhaps the third time the characters decided to make home-made candy that I began getting bored of it all. The main plot itself is relatively interesting, if not perhaps a little plodding, but everything that happened on the side was just a lot of fluff that contributed little to the game as a whole, or to the characters.

The characters themselves don't stand out either. Mask of Deception has a wide range of people that Haku interacts with on his journy, from a Robin-hood-like thief, to a demure princess riding a fat bird as a mount, to a renegade ronin who joins your cause out of a sense of duty, plus many more. But so many of them are just poorly written, two-dimensional and have no particular depth to anything they say or do. Many of them have absolutely no presence beyond a couple of scenes and gags. A couple of the main characters have some interesting scenes and writing, such as Haku, or the woman who rescues him, but if you excised more than half of the characters from the story, it'd stay exactly the same. And the amount of times the characters are used simply to sexualize situations and scenes was embarrassing. 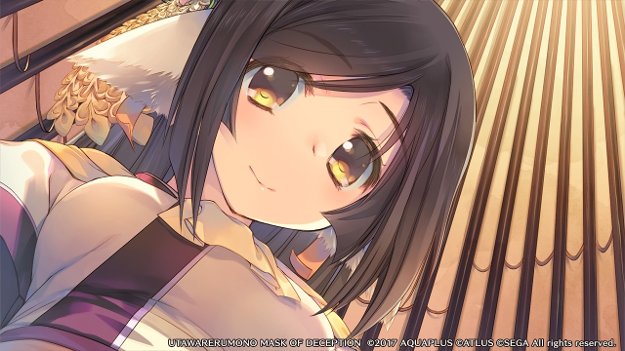 At one point in the game, Haku is presented with a pair of young twins, and told he can do whatever he wants with them. For hours, and in almost every scene they are in afterwards, all they want to do is have sex with him, to satisfy him, to be ordered around by him, and until one of the very final scenes in the game, that was their entire purpose. It was tiring, it was embarrassing to be seen playing, and it was, quite frankly, boring. And the amount of excuses the game gives to present situations in which the females of the game are caught naked, or lose their clothes, or what have you was just as tiring - though thankfully these contrivances fell away in the latter half of the game.

Add to this the fact that this is about as straightforward of a visual novel as you can get - there is absolutely no player agency in the story whatsoever. The most choice you'll ever get is choosing what order to watch certain scenes in - though make no mistake, you have to watch them all to proceed. Combining this with the often drawn-out dialogue made scenes not related to the main plot an effort to get though.

The tactical portion of the game isn't much better. It's a standard turn-based affair - characters move in order based on their speed, you attack each other, you win or lose based on the objectives of the battle. There are a few wrinkles to the formula, though - for example, you don't perform individual attacks, but instead 'action chains', that give you a series of quick-time events to perform in order to get critical hits with your attacks. Similarly, sometimes attacks can be defended against or even dodged if you perform these QTEs while being attacked (if the character has the relevant skill, of course). Levelling up gives you more elaborate action chains, and equipping certain items will do the same. 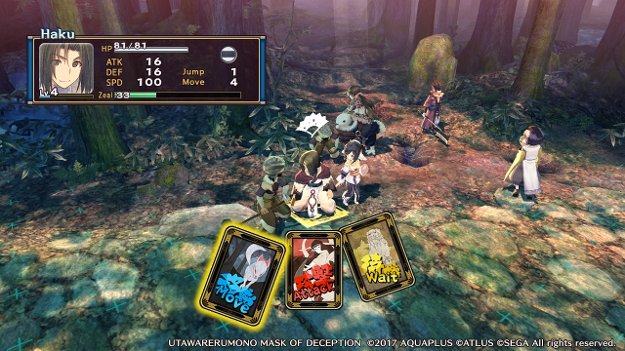 The problem is that there isn't very much strategy to any of the battles - in almost every case you can just pick your favourite combatants and send them towards the nearest enemy to attack them with your strongest action chain. Use healing action chains to keep your allies healed up and don't run into the middle of a pack of enemies, and success is almost guaranteed. Or sometimes the enemy rushes you before your characters even have a chance to move, killing a few of them and ruining your chances, due to no fault of your own. There's very little here that makes you feel like a master tactician.

Which is a shame, because there are elements there that make it seem like it could be a bit more of a challenging game. Things that area-of-effect attacks, for example, don't hurt your allies and enemies rarely move together so it's rarely worth using them if there are stronger options available. Likewise, there is an element weakness wheel, but it's simply not necessary to use since merely having more levels than the enemy will triumph more times than not. And in the end, it typically only takes two or three attacks for any one character to be taken down, so someone, enemy or ally, will often just get one or two attacks before some long-ranged attacker moves just a couple spaces and executes a few attacks to take them out, so there's no point to try to strategize their actions anyway.

Mask of Deception isn't a very fun game to play, nor to read. As there's an anime that goes over the entire story, it's probably a better option to simply watch that rather than play the game, if you really want to know the story of the game. It's also worth noting that Mask of Deception is simply the first half of a two-part storyline, ending rather abruptly and without much in the way of a conclusion. I just see very little reason to recommend the game itself, one without any choice and very little tactical challenge, over an animation you could simply watch.