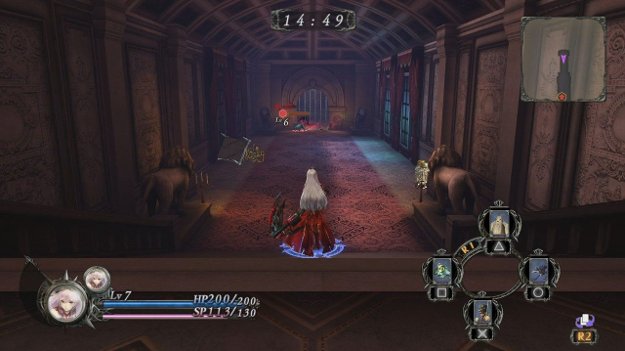 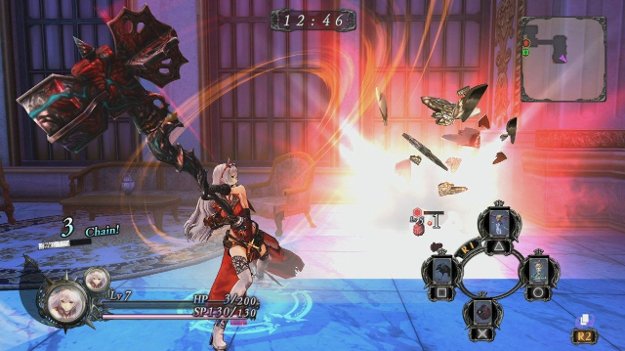 So sometimes saving the world and defeating the big bad guy isn't enough: in Nights of Azure, the demon lord has been defeated, but the blood from his body covered the land, mutating its inhabitants into demonic creatures that come out when the sun has set, killing everything in their path. Arnice, a half-demon holy knight in the service of an organization known as the Curia, has arrived to set things right, hopefully for good. 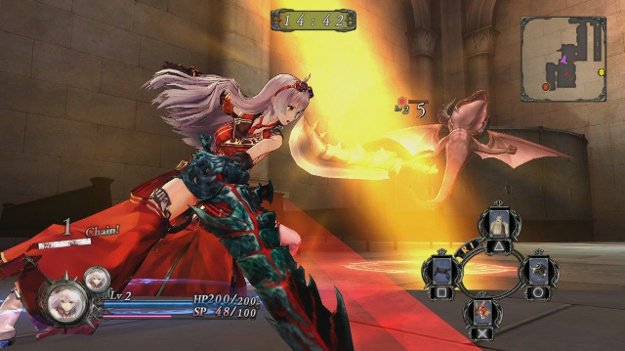 The game mostly takes place through different nights - each night, Arnice goes out into the town, essentially attempting to get from point A to point B and maybe slay a boss. Complicating this goal is the fact that you only have a time limit to accomplish this, meaning that you need to be efficient (though the limit is rarely a serious issue). Of course, there are demons to fight and treasures to acquire along the way, which is why Arnice also has the ability to fight back against the enemies of the night.

The combat in Nights of Azure is a fairly monotonous exercise, as you'll mostly be performing the same combos over and over again, pressing the same buttons repeatedly. There are technically two attack buttons, one weak and one strong, but I found myself only using the strong attack when I remembered that it existed - otherwise it was just an exercise of mashing a single button again and again. It starts out being decently enjoyable when beginning the game, but eventually just becomes a rote exercise as you carve through yet another group of demons that have just spawned upon your location. 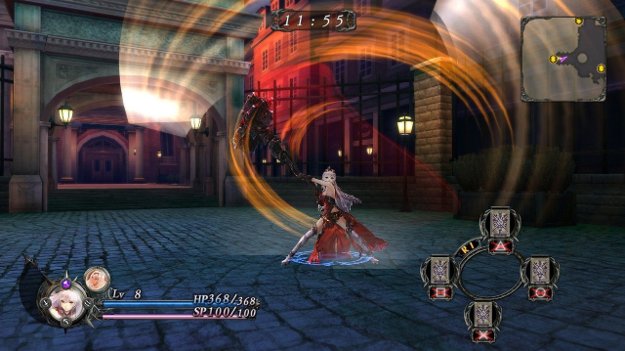 Arnice isn't alone, however - she has the ability to summon up to four 'Servans', demon helpers that join you as you acquire their demon fetish. They're useful companions, but only to a point, as they're mostly controlled by simplistic AI while you do your own thing. You can order them to perform simple actions, like healing or attacking, or even unleashing special moves, but for the most part they're an underutilized part of the game that lacks any sort of depth.

Similarly, Arnice has the ability to transform into a variety of demon forms - the form of which is influenced by the demons she has summoned (each of them give certain amounts of influence towards different forms, whichever has the most wins out). This, again, doesn't really introduce much depth to the game, as you'll still just be mashing buttons while advancing towards an enemy, only now you'll probably be doing more damage.

The game's story doesn't stand out in the slightest either. While the overarching story is okay - a fairly standard story about the cost of saving the world, sacrifice, and friendship - but it's completely overshadowed by moment-to-moment subplots that are ridden with tropes, being dull at best and embarrassing at worst. This is compounded by the extremely questionable character design that emphasizes sexuality over literally everything else, making characters that seem more like two-dimensional cutouts from a pinup magazine than anything else, despite the relationship between them that the game attempts to display. 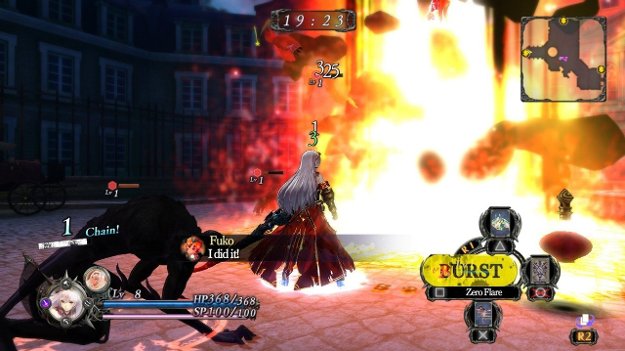 Some of the game's time is spent in a place called the Ende Hotel, where she can spend experience points (which is actually demon blood), tool around with her equipment, or go on quests, which are just as repetitive as the rest of the game would have you think. There's more little side stories that occur here, but like the rest of the game's plot there's no substance to them.

Nights of Azure just ends up being a very banal experience marred with some dull combat, plot and characters. There's no depth to the game, nor to the writing, and I find it hard to take the characters seriously half the time when so much of their interaction is cliche-filled. It's just a flavourless gameplay experience overall.