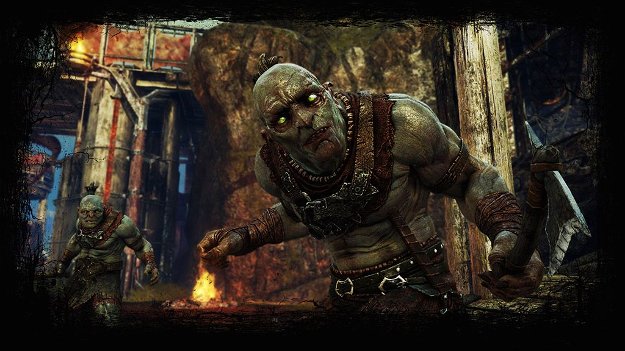 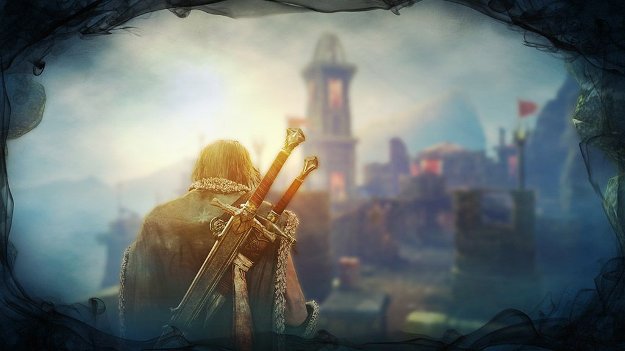 I have a bit of a dilemma when it comes to Middle-earth: Shadow of Mordor: I'm pretty sure I love it, but most of the reasons why I love it are because it reminds me of other series -- Batman and Assassin's Creed -- that are amongst my all-time favourites. Consequently, I'm not sure if I really, actually love Shadow of Mordor, or if that's just a reflection of my feelings towards the games it borrows from so liberally. Then again...who cares why I like it, as long as I like it, right? Yes, it basically steals the Arkham series' detective vision outright; if you've spent any time at all with Batman looking at the world in detective mode, then you'll find it awfully familiar when the main character here, Talion, enters the wraith world and suddenly everything important in your surroundings is highlighted.

Similarly, Arkham's influence is pretty strongly felt when it comes to combat. Obviously, it's a lot gorier here -- unless I missed it, I don't think the Caped Crusader has ever ripped off anyone's head or ran a sword through their face -- but the basic idea is the same: lots of counters, building up combos until you can do some really cool stuff, knocking people out on the ground, and, of course, the final slow-mo shot as you take out the last remaining enemy. 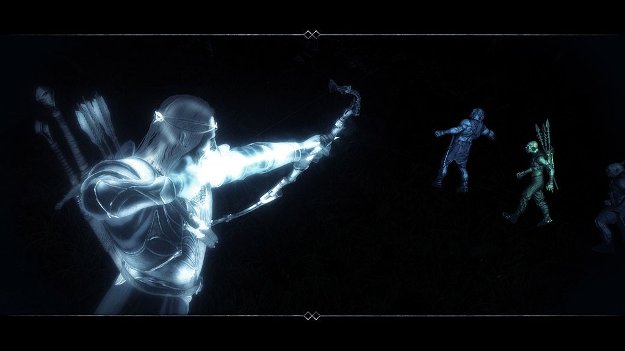 There are, of course, moments when Shadow of Mordor isn't borrowing from Batman -- and generally when those moments are happening, it's taking rather liberally from Assassin's Creed. The settings are obviously somewhat different, but the gist of it is the same: if the Animus could somehow transport its users into the Tolkien-verse, you'd get exactly the same kind of parkour-inspired wall-climbing that you get here. It's a little more well-executed here, in that you don't need to constantly hold down shoulder buttons to make others work, but if you can see a huge difference between the two you're a lot more perceptive than I.

Having said all that, it's hard for me to be too upset about Shadow of Mordor borrowing so heavily from those other games. After all, as I said, they're amongst some of my very favorite franchises, so I'm not going to complain if I have even more opportunities to use their mechanics.

Even more important, though, it's not as if Shadow of Mordor is completely devoid of its own ideas. Its "Nemesis System" -- wherein your interaction with orcs actively influences how those characters react to you over the course of the game -- is a neat development, making Mordor seem like a living place, rather than just a static game world in which you go one place, fight an enemy the same way, and then go somewhere else for other enemies. By making your enemies learn and grow stronger, it makes everything feel more vibrant, and it's the sort of thing that other open-world games would be wise to imitate. 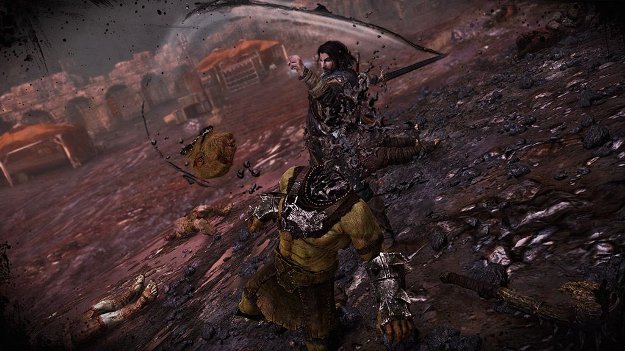 Likewise, developers Monolith deserve all kinds of credit for creating a story that stands on its own. They didn't create a great plot, mind you, but they still developed enough of one that they've justified the game's existence. That may not sound like much, but when you consider how lackluster most Lord of the Rings-inspired games have been over the years, that's actually saying quite a bit. Shadow of Mordor never feels like it's being shoehorned into a pre-existing narrative, nor does it come off as being some minor action on the margins of a much bigger (and better, and more interesting story). The action here takes place between The Hobbit and the LOTR trilogy, which gives it room to breathe and exist on its own. Admittedly, I wouldn't be able to tell you the story beat for beat, but I still got the rough idea (and when I didn't get something it was more because I'd become too engrossed in side missions to remember the plot, rather than because of a failing on the part of the game).

Having said all that, it's not like everything Shadow of Mordor does on its own is praiseworthy. Generally, I'm not too crazy about how it looks...or, to put it bluntly, this is one drab-looking game. It's capable of being more than that; I know it is, because nearly everything is created with such obvious care and attention. But rather than making it look like a really vibrant place, they just covered everything with a dull sheen of brown and green. I know that Mordor isn't the happiest or brightest of places, but that doesn't mean that it can't look at least a little more interesting. 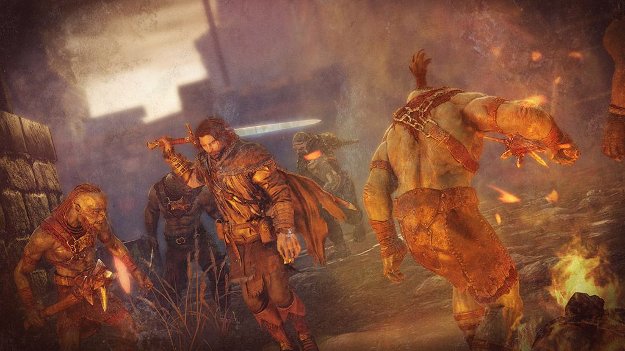 Now, if you want to really single out an issue with the game's graphics, you need to focus on the game's main character, Talion. Like the landscapes, pretty much every other character here was clearly created in loving detail. Gollum, the orcs, even the creepy ghost that accompanies you everywhere: they all look pretty impressive. Whereas Talion...well, Talion looks like he was drawn by the same old woman who did the restoration of Spain's infamous Ecce Homo fresco. He's obviously not quite that bad, but the mere fact there's even a bit of a comparison to be made there shows how strangely crappy Talion's design is. I imagine that the developers wanted to make him a cipher or something, but nonetheless, the end result is pretty abysmal.

That's about the only thing in Shadow of Mordor that could be described as "abysmal", though -- and even if that one abysmal thing is the main character's design, it's not nearly enough to detract from everything the game does right. True, what the game does right is largely what Batman and Assassin's Creed do right, but quite frankly, that's more than enough. Add in the fact its little additions to those formulas are pretty cool, and you can see why Shadow of Mordor is such a legitimate GOTY candidate.