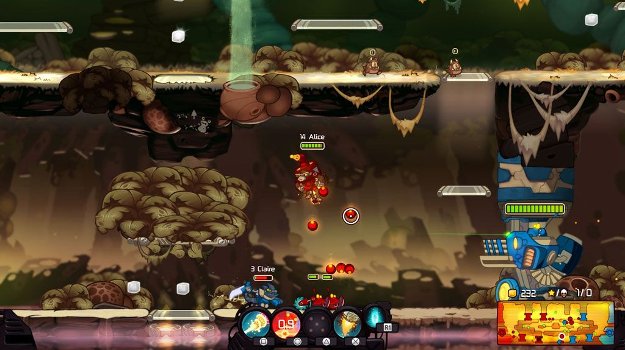 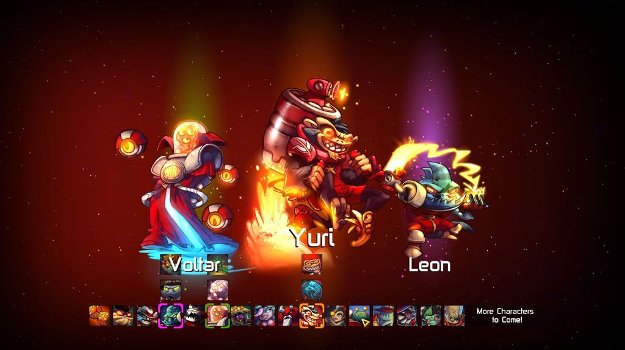 First, the optimistic view of Awesomenauts Assemble!: as multiplayer indie games on the PS4 go, it's definitely one of the top two. It's brightly coloured, it's visually appealing, and in certain doses, it's a lot of fun.

Did that come off as damning with faint praise? Because...well, that was kind of the intention. Awesomenauts Assemble! is good enough, but in any competition between it and the other game in the top two, Towerfall: Ascension, the latter wins every time. What's more, the other games in the running -- Super Motherload, Tiny Brains, and Basement Crawl -- are, respectively, woefully boring, woefully short, and just plain woeful. In other words, if Awesomenauts Assemble! wasn't in the top two, it'd be kind of sad. 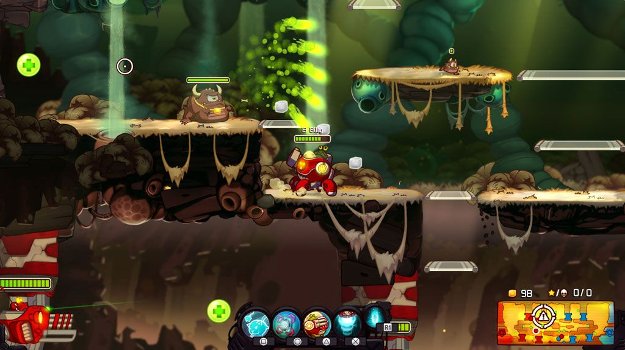 Now, I don't want to give the impression that Awesomenauts Assemble! is, in any way, a bad game. It's got a few things working in its favour, in fact. It looks wonderful, with a bright, distinctive visual style, a nice contrast with the usual greys and browns that populate so many games today. More importantly, the matchmaking system seems to work well enough, making it wonderfully easy to join in a game with a minimum of fuss -- always an important thing when we're talking about a MOBA. And, to top it all off, the controls are about as straightforward as they come; even if you've never played Awesomenauts before in any of its previous versions on PS3/360/PC, you'll be able to jump in and get the hang of things pretty quickly. (Of course, you'll probably still die a lot, but that'll be because the online community is so good, rather than because you won't have any idea what you're doing.)

So what's the problem? Paradoxically, it's that there's simultaneously too much of Awesomenauts Assemble!, and also not nearly enough. There's too much because, in the absence of any clocks or timers, matches can drag on seemingly forever. At the same time, however, considering your sole objective is to attack and destroy the enemy base, matches often turn into endless, repetitive slogs. You attack until you die, you respawn, and repeat. That's pretty much it. Even on the easiest settings against AI opponents (aka the training mode), you're still looking at a long, hard-fought battle. 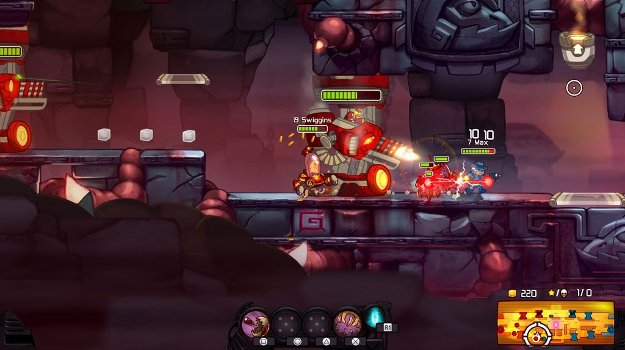 Obviously, of course, there's a market for that. MOBAs like these wouldn't exist if there wasn't, and the fact that Awesomenauts did well enough on previous-gen consoles to warrant a next-gen port suggests that's particularly true in this case. At the same time, however, I can't say it's an experience that really spoke to me. Don't get me wrong -- in small doses, I found the game fun. Invariably, for the first five, ten, fifteen minutes of each match, I'd find myself really enjoying the thrill of firing off missiles and exploding bulls and whatnot. But after that initial excitement wore off, and the game just kept on going, and going, and going, I'd start longing for the sweet release of in-game death -- probably not the emotion the developers wanted to evoke. If you've somehow already exhausted the possibilities of the one better multiplayer indie game the PS4 has to offer (see the second paragraph), then sure, give Awesomenauts Assemble! a try. But if you haven't...it can probably wait a little.