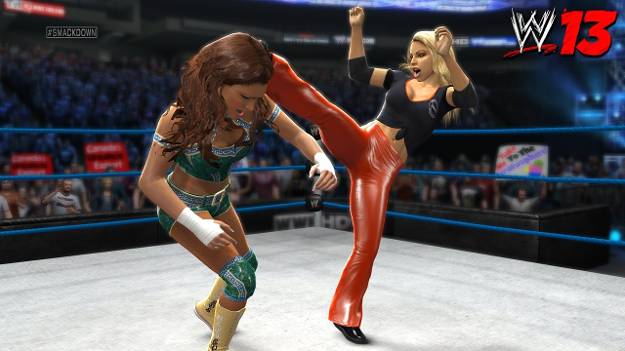 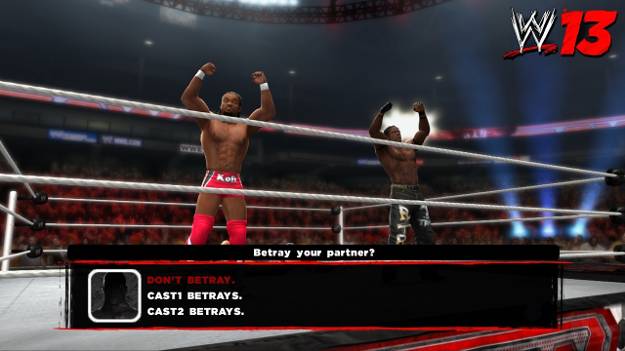 This is going to sound a little odd, but here goes: as I play through WWE 13, the game that I'm most reminded of is NBA 2K12. Or NBA 2K11, take your pick. But bottom line, as I'm playing a wrestling game, I'm reminded of a basketball one.

I swear the connection isn't as insane as it probably sounds. After all, just as both 2K11 and 2K12 use nostalgia as major selling points, taking players back to the Jordan and pre-Jordan NBA years, WWE 13 turns the clock back to its "Attitude Era", that period in the late '90s when the company was still known as the WWF and people still actually paid attention to wrestling. It's not exactly the most creative move on the part of the WWE/THQ/Yuke's...but considering that 1) the two NBA 2K games are among the most highly praised sports games of this generation, and 2) there are far, far more people willing to spend money on nostalgia than on the less-than-stellar product currently being created by the WWE, it's hard to fault them for stealing the idea. 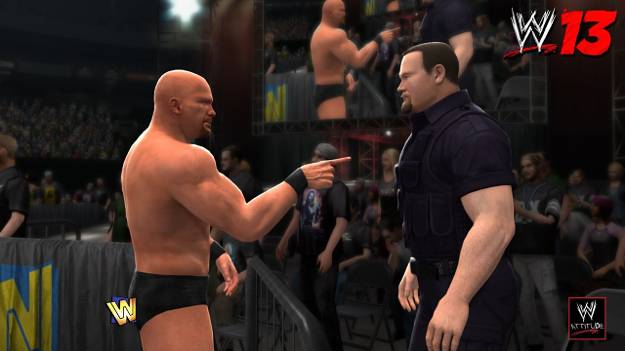 It helps, of course, that they pull it off pretty well. WWE 13 takes about five years of storylines and content, and presents it in a way that's engaging and fun -- not just for wrestling fans, but also for people (like me, I'll admit) who weren't watching every week during the Monday Night Wars. Heck, even if you're going into the game with only a vague idea that pro wrestling existed in the late '90s, this game does an outstanding job of explaining who the main characters were and what the stakes were, both within the context of the storylines and, more broadly, as part of the WWE's fight to the death against arch-rival promotion World Championship Wrestling. Not many sports games pull off the trick of being just as appealing to newcomers as they are to diehards, but WWE 13 is more than up to the task.

On top of that, you've got the return of last year's WWE Universe mode. There's something really neat about being able to create a character and inserting him (or her) into a world that seems to be functioning entirely on its own. Titles change hands, number one contenders come and go, and you get to work out where you fit into all of it. Admittedly, it's not a huge departure from the career modes offered by any other sports games, but there are just enough pay-per-views and belts thrown into the mix that it feels different enough to be fresh and fun.

Which isn't to say that WWE 13 is without its flaws. It is, to be blunt, fairly hideous. Things don't look so bad when you see the wrestlers from a distance, but the moment the camera zooms in on faces, the results occasionally verge on the nightmarish. This might be excusable if the problem were confined to action shots -- where, after all, anything can happen to a game's graphics engine -- but when you have horrors popping up during cut scenes and still shots, you've got a bit of a problem. This issue is compounded by the fact that the game incorporates so much video from the Attitude Era. I mean, I don't know exactly what goes in to rendering real people into video game characters, but when you make Mike Tyson look like Craig Robinson from The Office, or Triple H look like...I don't know, the disturbingly smooth-looking abomination that he is here, it's safe to say that you probably went wrong somewhere along the line. 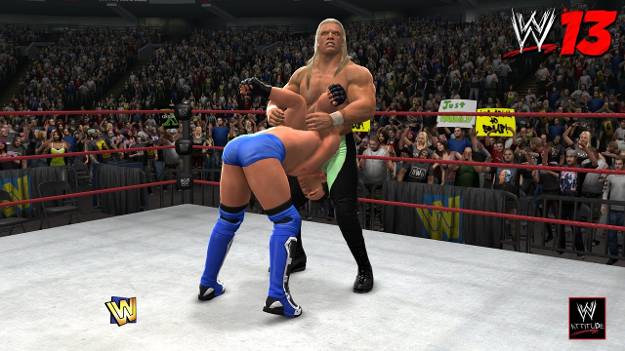 Also a problem, though not to the same degree: the glitches. As hilarious as it may be to see wrestlers suddenly start sliding across the screen when they try to grapple an opponent, it's a lot less funny when, say, that same glitch eliminates someone during the Royal Rumble. (Not that I'm bitter or anything. But seriously, kicking someone down in the middle of the ring shouldn't cause them to suddenly teleport outside of the ring.) While there aren't enough issues with glitching that you could say the game is completely broken, if you're going to play WWE 13, you should be aware they seem to pop up throughout the game.

And really, you should play WWE 13. Any issues it may have in terms of graphics and glitches are more than made up for by the fact it's got a heck of a lot of content and it's a whole lot of fun. Regardless of whether you're picking it up for nostalgia, or because you want to get in the ring with CM Punk, Daniel Bryan and Dolph Ziggler, or you just feel like dressing up muscular men in tights (no judgment!), there's more than enough to it to make it worth your while.