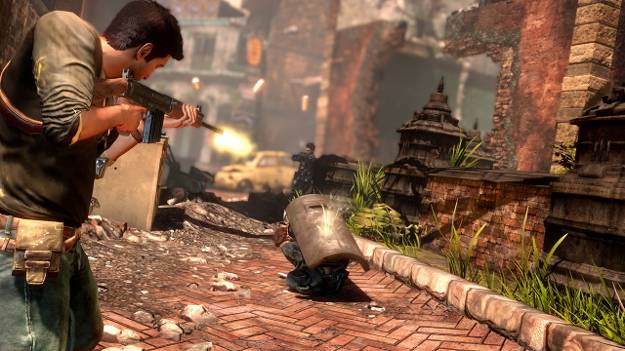 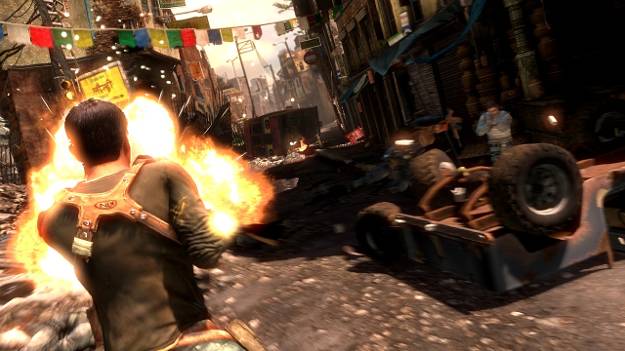 When I played the original Uncharted, I was impressed. It was a really good blend of platforming and cover-based shooter mechanics, all wrapped up in a stellar presentation and story fit for cinema. So it was hard to believe that Naughty Dog could strike gold again with a sequel, making a game that was as good as Uncharted: Drake's Fortune.

Well, in short, they didn't.

They made it better.

Nathan Drake, the quintessential every-man adventurer-explorer-hero is back, and with him comes the platforming and shooting that were in the first title. The platforming element is a lot more dominant in this game, with fairly long stretches of gameplay dedicated to jumping across ravines, climbing up crumbling walls, and struggling to not plummet to your death. This is a part of the game that has flaws. You see, the environments look spectacular and full of detail. Too much detail, in fact, to the point where it's sometimes really tough to figure out where you can actually climb to. The developers did a fairly decent job of rectifying this by using bright colors to have platforms and ledges stand out visually, but there were still moments where running around a single area searching for the handholds I was to use to get higher was all I could do for a quarter of an hour. There were a few times when I wanted to get it over with and just get back to the gunplay, but that's less of a problem with the platforming and more of a recommendation of the run-and-gun gameplay that fills the rest of the title.

The cover shooting is what really makes the Uncharted games as fun as they are. Typically, I don't like cover shooters. When I've played them I always find them plodding, slow-paced experiences that just involve sitting behind an invincible stone wall while I wait for enemies to pop their heads up, like a visceral game of whack-a-mole. But Uncharted doesn't do this. It emphasizes movement, motion, and speed. Sitting still with get you a grenade at your feet, and since you can't exactly carry a whole arsenal of weapons and ammo, you need to run around to pick up fallen guns as well. Drake's Fortune made it a fun style of play, and Among Thieves refines it even more.

Many of the gripes I had with the original Uncharted have been completely fixed. For one, the crummy grenade aiming system in the first game, which used the Six Axis controller in a very clumsy way, has been dropped. In its place is an efficient and easy way for tossing grenades onto opponents. There are also additions of riot shields, which allow a type of movable cover, and a new weapon type called the GAU, a giant gatling gun that doesn't take any weapon space, but that is heavy as all hell and slow to move around with. There are also a bevy of new traditional weapons, such as the pistole pistol shotgun, crossbow, and the RPG. And to complement these new weapons are new ways for Drake to get around his environments, Melee attacks have also been reworked: though brutal combos have been removed, now you must pay attention to the combat in order to break out of any holds your opponent places you in, or risk getting a beat-down.

And of course, there's the stealth addition into the gameplay. Now, when someone mentions "stealth in an action game", generally you'll get a few cringes from the audience, since these genres generally don't go well together. Among Thieves blends the two together quite successfully, however. Whereas in the first title, there were few opportunities to take your opponents by surprise (generally the bad guys already knew you were coming), Uncharted 2 makes stealth a viable, useful option. In addition to simply sneaking up from behind an enemy to take them out, you can now pull them over ledges, smash them from around corners, or use cover to pull them over and take them out, all without anyone else seeing. The rewards for this, in addition to not having to deal with a wave of reinforcements, are extra ammo and supplies from your fallen foe. The system works really well, blending the movement and platforming that the game is famous for with a sneaky approach to nearly every situation.

Much of Uncharted's appeal comes in how it presents itself. This is really the closest thing to an action movie that has been released; every minute of it seems like it's pulled straight from the cinema. The fancy way of combining motion-capturing with the voice actors (also used in Drake's Fortune), combined with a stellar line-up of actors and action-filled cutscenes makes for a thrilling ride, even if you're not playing the game. The well written script doesn't hurt either, one that handles the pacing of the plot a lot more successfully than the original Uncharted. It's quite the international adventure from beginning to end, one that takes Drake around the world as he struggles to stop a crazy tyrant and find the secret to a centuries-old treasure.

Now, if that was all, it would be worth the price. But Naughty Dog has also added in a very robust multiplayer mode to the mix, one that's just as impressive as the single-player offerings. First, in the competitive arena there are a number of gameplay types, such as typical Deathmatch and Elimination, King of the Hill, Turf Wars, and Plunder, a kind of capture-the-flag where everyone is going after the same flag. There's also co-operative gameplay that allows multiple people to work together to either complete objectives (such as taking a treasure from on the map back to a base while fighting off AI opponents) or survive a constant onslaught of enemies. Each of the modes are built around the strengths of the single-player game, which means climbing platforms, melee, and stealth attacks are all available to the players.

Playing through the game, both on single player and multiplayer, also earns you cash which you can buy bonuses with. In single player, this generally amounts to the same kinds of things from the original Uncharted - skins, render modes, making-of videos, and so forth. In multiplayer, however, there are a whole new slew of skins, weapons, bonuses, and 'boosters' to purchase, as long as you've earned enough experience points from playing online. Most of these are self-explanatory, such as the skins and the weapon upgrades for co-op modes, but the boosters are new to the series. Before you play matches, you can equip two different types of boosters that give you specific bonuses, such as giving you a larger weapon clip, faster moving speed while aiming, or better aiming from the hip.

What's really impressive about Uncharted 2 - Among Thieves, are the graphics. The game just looks gorgeous. An area that springs to mind in particular is one segment where you're riding a train (well, running along the top of it), and the scenery is rushing by you. I must've taken fifteen minutes just to look around at the passing landscape, fast as it was. That's not even getting into the lovely vistas or shadow-drenched ruins you uncover along the way. But, as always, it's the details that really make the game shine. The facial expressions on the characters, the way their clothes get caked in snow, only to melt off later, the discreet animations that make the characters that much more believable...it all comes together to make a fantastic visual package. The same goes for the aural experience, with great voice acting and a soundtrack that combines action-filled pieces with the more sombre tones, all with a distinct flair that matches the location you're in.

Uncharted 2 is simply one of the best games I've played yet on the PlayStation 3. It has not only a fun and engaging single player mode but also a robust multiplayer mode that can keep you busy long after you've played the game. The production values are through the roof, and everything just seems to come together to make a cinematic experience that rivals no other. It's a stellar example of a third-person action title, or just action games in general, and if you've got a PS3, you owe it to yourself to experience what Drake has to offer.