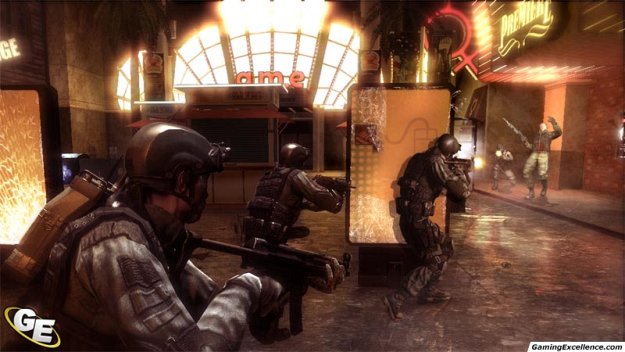 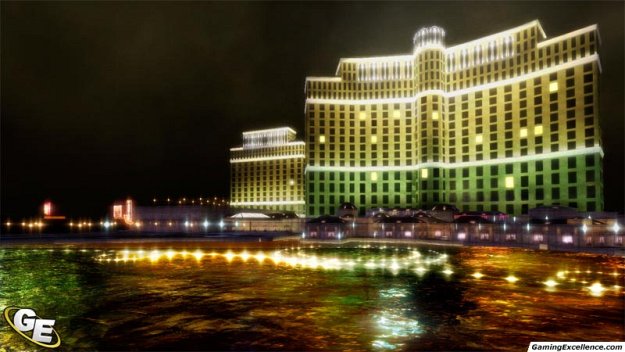 Rainbow Six was one of the first tactical shooters to hit the market back in the day. Since then, the series has continued a strong following with some hits and misses between subsequent iterations. The new game to hit the series is Rainbow Six Vegas, and it offers some considerable improvements in terms of team play and action. The game has already been out for a while on the 360 but the PS3 version looks just as good if not better.

Rainbow Six Vegas puts players in control of a counter terrorist team called Rainbow. Your team's objective is to go through various environments while rescuing hostages and killing terrorists. There isn't much to the story in terms of cutscenes and most of the plot unfolds while you're out there on the field. Don't expect a complicated, deep, or emotional plot, as Rainbow Six Vegas simply isn't that kind of game. You could say that Vegas is more about the teamwork tactical gameplay rather than character development.

But what Rainbow Six lacks in thoughtful story, it more than makes up for in gameplay. The game lets you command a number of teammates that can act on their own or follow your orders. The controls for the team are very simple, so it's not that hard to make some effective strategies on the fly. Some of the commands include, telling a teammate to take cover at a specified spot, holding off any further action, or forming up on the leader. Most of these commands use the D-Pad and they're as simple as pointing to a specified place and pushing the right direction on the Pad. While those are the simplest commands to use, teammates are able to break through doors at your command, flash bomb a specified room and others.

Most of the commands for the players are dependent on two modes of play. There's the default mode, where teammates will only fire when fired upon. But there's also the weapons free mode, where your mates will actively search for a target to shoot. These also determine the way of entry into a room and other actions. A good way of using some of these mechanics is with the Snake Cam, which lets players sneak a camera inside a room without actually entering. While in that mode, players can pinpoint different doors for entry and mark different targets for priority targeting. It does sound complicated at first but the game makes these sorts of actions really easy to perform. And even if players don't plan their actions fully, the team is still able to take cover when needed and return fire.

Teamplay is only one of the features of Rainbow Six, but the game as a whole does manage to impress as well. The different environments, from Mexico to Vegas, present a good amount of challenge and fun. Mexico features a couple of rundown buildings and missions are all during daylight, while the other locations play out at night with Casinos, concert halls and offices. All the locales feature a lot of cover points and tight corners to keep the Rainbow team on their toes. Players can take cover, peek out to the side or upwards to shoot, and use an assortment of kickass weapons while doing it. Some of the weapons include Rifles, pistols and grenades. The accessories are also very fun to use and include heat-sensing goggles, night goggles, and even rope for climbing down some buildings. Players can also combine strategies such as throwing a smoke grenade, and then picking off targets with the heat sensing goggles. There's a good variety to the action and some hostage situations are different than others. One of the objectives for example, will put you outside a room while the terrorists prepare to kill some hostages. So there's a set time to save everyone and get rid of the bad guys. If you think too much, the hostages die and it's game over. But if you go in without a strategy, you may not pick them off in time to save everyone. It's at those moments that Rainbow Six Vegas shines as an awesome tactical shooter.

Of course, I can't round out this review without talking about multiplayer, and it is quite good. The game features four player co-op for story mode, as well as other stand-alone modes like team-deathmatch. It's also easy to find your PSN friends as Ubisoft put a community button that lists all of your friends and their status. The game does seem to add all the friends from your original friends list, so there's no need to add your buddies again as in Resistance. The only complaint about multiplayer is that the game searching ability could be improved, as well as making the co-op story a bit more cohesive. But other than that, team co-op is always welcome, and this game is made for multiplayer teams.

Rainbow Six Vegas isn't all roses but it's not all thorns either. I guess you could say it's mostly rosy all around. There are various glitches in the game, and some of those could give an unfair advantage to players in multiplayer (like entering a vending machine and becoming invincible while able to shoot others). And while most of the levels do have one glitch or other, they're nowhere near as serious as that one. But that's mostly nitpicking on a game that has a lot going for it. Rainbow Six Vegas more than makes up for it with its commendable level design, great team mechanics, and varied assortment of weapons/accessories and armour. It's not for everyone, but it's certainly a worthwhile addition to ones PS3 library.