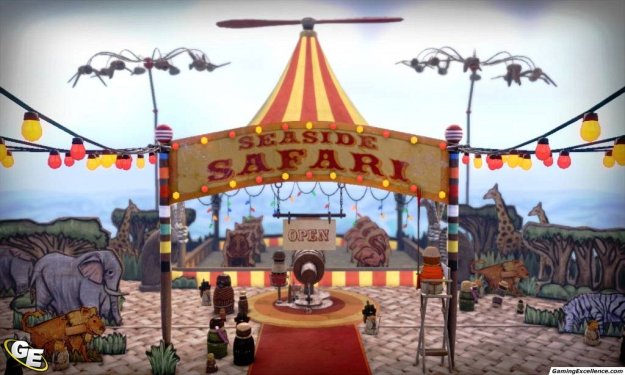 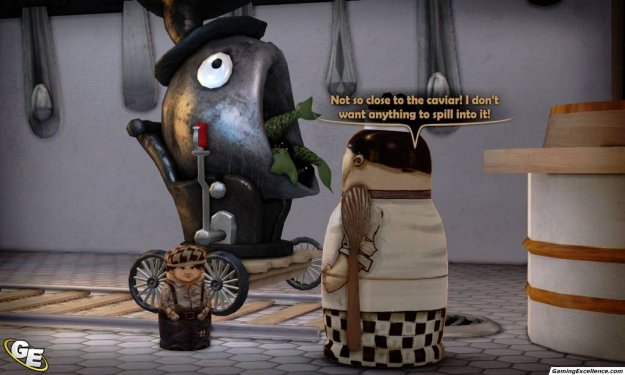 As much as I love the gaming industry, unique games aren't exactly common nowadays. Most games can easily be summed up as "X meets Y", for example the phenomenal Dead Space series easily boils down to Resident Evil 4 meets Aliens. Even if these games do end up being good they're still working off of a formula and it's a rare developer who chooses to wholly buck this trend and try something unique. Enter Tim Schaefer and his newest game, Stacking.

Stacking tells the story of Charles Blackmore, the smallest doll to live in a world of Matryoshka, Russian nesting dolls. After his family is kidnapped into forced labor by the evil Baron Charlie rushes off to go rescue them using only his ingenuity and his unique ability to stack with other dolls. While other dolls are shown to stack to stay together, like a family, Charlie actually has the ability to take control of other dolls via stacking and use the doll in question to assist him in his mission.

Honestly that's all there is to Stacking. It's a very basic premise helped along by the simple gameplay. All you need to know is that one button lets you talk to people, one button lets you stack with dolls one size larger than you, one lets you use your current dolls ability and one lets you unstack with the other dolls. The entire game is basically just you trying to find the right dolls for the right situation and using them properly. Even though it sounds incredibly basic you'll be surprised at how much brain bending some parts of this game require.

You see Stacking is actually an adventure game in disguise. While it plays out like a typical action-adventure game with how you move and control it actually has a lot more in common with a point-and-click than it does any other genre. The main gameplay part to Stacking is that of completing the various challenges to remove obstacles in your path and get your various family members released. To complete these challenges Charlie will have to stack with the appropriate dolls and use their abilities to solve the puzzles.

As an example, a late game puzzle requires you to get a huge doll out of the way but you initially have no real clue as to how to do so. It's only when you realize that this doll is something of a germophobe and find out ways to exploit it. Like getting a small doll sick, stacking with it and chasing him off with your icky germs. But this is just one of several ways you can complete this challenge and figuring out all the myriad ways to complete some of the trickier challenges is the main draw to the game.

Of course there are other things to do in the game but these amount to little more than distractions. You can try to find and stack with all of the unique dolls or complete all of the various Hi-Jinks in each level, such as taking control of a little girl and playing tag with other child dolls or using another doll to go around, farting on others. These provide you with a few hours of extra entertainment but overall they're not going to extend the short game by much.

Honestly this is really the only place where Stacking falls apart. The entry fee is somewhat steep, checking in at $15, and you only get a few hours out of the game. If you just try for one solution per challenge and just buzz through the game it might take you about an hour or so to finish. Even going for all of the achievements / trophies it only took about five hours or so to complete the game to the point that there was literally nothing left to do in the entire game.

One might be able to chalk this up to perhaps to this reviewer being a bit more of a hardcore gamer but there is no difficulty to this game. There is a very thorough Hint system that all but spells out what you need to do as you choose unlock the various hints. This means that even the dullest of people can rapidly solve all of the challenges in rather short order.

Another place Stacking excels is in the style of the game. Everywhere you look there are little details that just really help with making the game world feel more fleshed out. Cutscenes are done in a rather interesting silent film style that really feels like it gives the game a more distinctive appearance. Helping that one of a kind art style is the way that the backgrounds were done. Decorations are made out of things like paying cards or band-aids while torches look to be made out of matches. Seeing how things are put together really gives it the feel of a living, breathing diorama.

Stacking is a fantastic game with some actual content, challenge (so long as you avoid the hint system) and it has a whole lot of charm. Sure there are some issues with what sort of content you get for the price you pay but let's be honest. This is such a minor freaking quibble as to be mostly irrelevant unless you're seriously strapped for cash. Otherwise this is a must own game that really does live up to its promise.