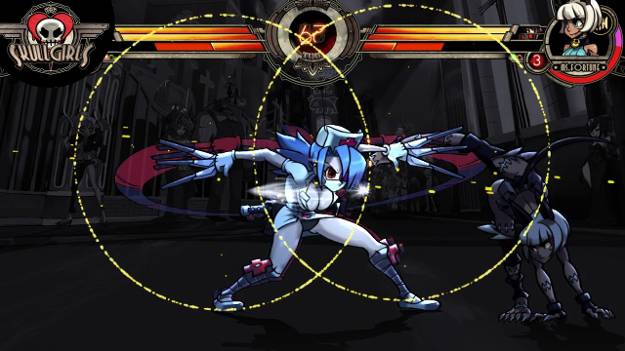 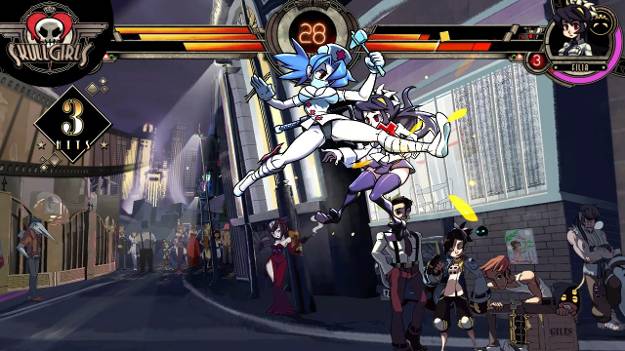 Sometimes it can be easy to forget just how intimidating a genre like the humble fighter can be. Riding in on a crest of devastatingly complex combo moves and reams of terminology baffling to anyone who isn't familiar with an arcade stick, the barrier to entry has always been high enough to require an escalator. In a thoughtful nod to this conundrum, Skullgirls attempts to walk the tight-rope by appealing to both sides of the fence.

Whilst I'm very aware of how this sounds (that sort of talk is usually a PR-friendly indication of a watered-down experience, after all), you might want to wait just a moment before throwing in the towel. Although developer Reverge Lab's attempt is only successful in part, it's worth mentioning how this digital brawler throws a line to casual players without actually compromising the enjoyment of the hardcore. This makes it quite an unusual beast to begin with.

It's a curious package in more ways than one, however. A relatively bite-sized 2D fighter attempting to muscle in on the tournament scene, another concern may be that it initially reads like a run-of-the-mill effort on paper. Atop that, there are already enough established franchises shooting for the same target to sink a tanker. But that's merely looking at the numbers; once you're behind the wheel it's a very different story. Here's the long and short of it - if you're a hardcore fan of the genre with an eye for competitive play then Skullgirls is definitely worth your attention, sneaking under any low expectations and slapping you awake with a swift upper-cut to the jaw. If you're a newcomer, on the other hand, it's an ideal starting point to learn the ropes. 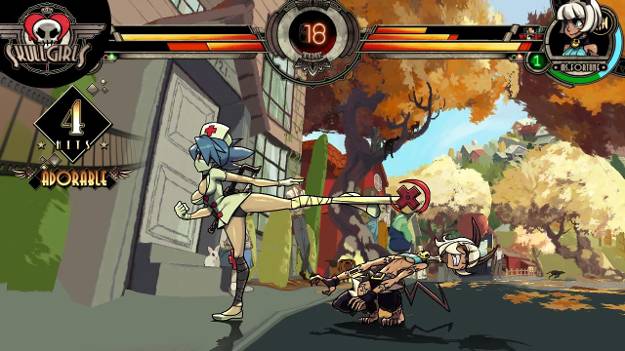 The first indication that it's something a little special comes when you clap eyes on what is a genuinely inspired art direction. Whether we're talking about the gorgeously animated anime characters or the colourful art deco backdrops, Skullgirls is rarely less than dazzling. Elsewhere, the overall 'Dark Deco' theme (providing an intriguing slice of 1930's glamour) adds the cherry atop an already loaded cake. It thrusts you so far into the territory of eye-candy that you're in danger of developing diabetes, in fact.

This makes the disheartening truth that it lacks meat on the bone a little easier to weather. Without much in the way of content beyond the standard story, arcade and multiplayer versus modes, there doesn't initially appear to be a great deal of bang for your buck here. This is a bit of a blow considering the relatively hefty price tag; at best it feels a touch meagre. Yet to leave things on such a note would be rather unfair. In spite of a lean physic, the second those curtains lift and you're left to let your fists do the talking you'll abruptly realise that this is a textbook case of quality over quantity.

Simultaneously imaginative yet deeply bizarre, its face-offs are a joy to play through - largely thanks to some spectacularly off-beat moves which are a riot of colour and twisted creativity. With characters that can merrily remove body-parts, utilise enormous armed hats or call upon tentacle wielding parasites stuck to their heads it never falls short of holding your attention to ransom. Even if feminists need not apply due to predictably titillating nonsense any self-respecting member of the opposite sex will find amusingly juvenile, it's sheer beauty is impressive enough to compensate for the most part. Coupled with a soundtrack that plays out to nostalgically old-school influences and jazz-room vibes, there really isn't anything else out there like it.

When it comes to gameplay, meanwhile, Skullgirls turns its focus toward shaving away the genre's flaws for a technically brilliant title that is hard to fault on a practical level. With the likes of versed tournament player Mike 'Mike Z' Zaimont stepping up as project lead, the team's expertise shines through for what is very much a hardcore player's hardcore fighter. It knows full well that it can't compete with the competition in terms of budget and brand recognition, so it doesn't try. Instead, it endeavours to create a balanced experience that sets its sights on polishing away many the genre's niggling problems.

This easily forms the bulk of Skullgirl's appeal, especially for the competitive player. Sporting the likes of an anti-infinite combo system and customisable assists for auto-balanced matches (offering anything from one-on-one bouts to three aside, or any combination in between), a trimmed down approach actually becomes something of a bonus when those extra man-hours clearly went into polishing the game's mechanics until they gleamed. This sentiment carries over to the impressive, if slight, roster. Eight characters round out a very even cast, with each offering a hugely distinct style to keep things fresh on the field. Whilst it may not be the high-speed chess of Street Fighter, it's not far off; Skullgirls is a deeply tactical affair, focussing on outsmarting your opponent and building up strategies to combat your foe's play-style.

Speaking of which, the game's GGPO system also keeps online matches running as seamlessly as possible. More often than not providing bouts that side-step any frustrating lag coming courtesy of disparate connection speeds, this makes for multiplayer face-offs that are commendably fair; a boon not to be undersold if you've ever come a cropper of dodgy online capabilities on similar fighters.

Still, you may have noticed by this stage that (despite the many pros) we're daintily skating around Skullgirl's heavily advertised accessibility. There's a reason for this. In short, it's not exactly the full monty you may have been expecting. Be under no illusion; regardless of whether it makes a brave stab at giving newcomers a leg up with an admirably comprehensive set of tutorials (along with straightforward combos that considerably reduce barrier to entry), this digital release is a no-frills affair aiming to provide a tournament-grade 2D fighter old hands can really get their teeth into.

This particularly sharp epiphany rides in on the back of what can only be described as an utterly vicious AI system. Punishing lapses without any semblance of mercy, it's practically murder on anything save the easiest settings. Whilst the arcade-stick crowd will thoroughly enjoy testing their mettle against a ravening monster that is happy to spit you out in a brutal shower of punishment at a moment's notice, anyone else stepping into the proverbial jungle will be eaten alive if they dare try anything beyond the lowest difficulty brackets. What's more, there's no move list to be had aside from those being released on the game's website; an irritating setback for veterans, but a nightmare for casual players who may feel they've been left out in the cold without a paddle. It's as if the developer overestimated newcomers' abilities, and this doesn't do the downloadable title any favors.

It's a real shame, and all the more frustrating in light of prior claims. It might take you half-way to that promised 'approachable' fighter hinted at on the blurb, but heaping too much attention on competitive players - arguably the logical decision, considering how they are almost certainly the primary demographic - erects a brick wall in the faces of the less experienced. If you happen to find yourself in this party, you might consequently want to give Skullgirls a miss; while it's definitely a golden ticket to learning the ways of the pro-fighter and should be applauded for that achievement, it's a jungle out there with innumerable colourful ways of crushing your skull and self-esteem if you let it. Suffice to say, then, this is an arena for the experienced, the brave of heart or those serious about taking a crack at competitive play.

If you fall into the crowd of long-toothed experts nevertheless, Skullgirls is right up your alley. It may skimp on extra padding, but that almost obsessive drive to create the perfect fighter absolutely pays off in spades for a product that addresses many of the genre's shortcomings. With enviable online brawls and a hugely unique character roster that will take some time to master, this unusual digital release definitely has a place waiting for it on the tournament circuit. And, when it comes to the already over-crowded stable it's staking a claim on, that's quite the feat in and of itself.