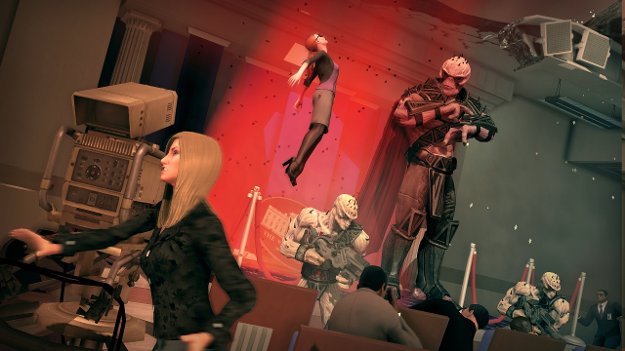 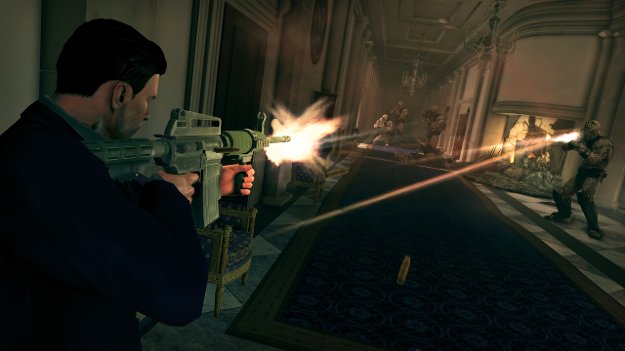 I got to sit down in a room filled with a number of consoles, ready to play some Saints Row IV - and immediately found myself walking through the White House. Oh, except now it's the White Crib, and the Saints' boss is the president of the United States.

I'm...not sure how that happened.

So I got the chance to play a mission in which you defend the White Crib from an alien attack, showing off gameplay that those who've played Saint's Row 3 will find familiar - run, gun, you know the drill. Then there's a scene where the gangland POTUS gets into a fist fight with an 8-foot tall teleporting alien with a British accent after shooting down ships with a star-spangled AA gun. So...Saint's Row IV. At some point you may say "Is that Keith David?" The answer is, yes.

I then got the chance to do some open-world action in a virtual-reality-version of the city of Steelport, and see where the game has really changed. First, you have super powers. These powers, such as a shockwave attack and telekinesis, allow you to bring new tactics to bear against your enemies. The powers can be customized, though I didn't get a chance to: you can increase various aspects of each power (like radius or strength of the shockwave, for example), but you can also attach elements to each of the powers, adding ice to freeze enemies with your attacks, or fire to set enemies on fire. Upgrading can be done via collectible objects found in the digital world called 'data clusters', giving you an incentive to search the entire landscape.

Oh, speaking of searching, the game isn't just about driving and piloting vehicles anymore. With your super attacks come movement abilities like leaping two hundred feet into the air, gliding around, and speeding around like a moving, destructive blur. It made moving around a lot quicker and smoother, and factored into an activity as well, where I was to sprint through, trying to hit boosts, avoid flames, and basically race through the city as fast as possible.

The customization system is also present when it comes to weaponry: weapons can have their abilities upgraded to make them stronger. You can also get skins to apply to each of the different weapons, changing how they appear (though not how they function). For example, the assault weapon I had in the demo looked like a super soaker.

Aside from that, there isn't much to mention in Saints Row IV, except that all the humour you expect is still there, but now with a super-powered presidential gangster delivering it. It promises to deliver even crazier experiences than its predecessors, and it'll be doing it on the Playstation 3, Xbox 360, and PC. Look for the end of the Saint's Row saga, coming August 20th of this year.