Action brawlers are a genre that comes with many memories to veteran gamers. You can definitely recall the times you were in an arcade with three of your friends as you each picked your favorite turtles or X-Men. With this genre appearing more and more, it captures those moments all over again; these days without having to feel like machines are sucking your wallet dry. Sacred Citadel is a competent brawler, but the fun may past by rather quickly.

The key thing about action brawlers was never really put into story. You get static backgrounds with a narrator telling tales of four mercenaries (a warrior, a ranger, a mage and a shaman) taking on hordes of enemies for the thrill of the fight and gold. You also get bad guys sometimes talking to each other during missions, but it never really successfully pulled me into its world.  You get the sense that things are dire in the Sacred series universe, but it comes off as very uninteresting. All I really cared about was going into the next mission and fighting more enemies. In a way, it kind of connected me to the characters itself. They didn’t really care about the outcome or the fate of the land; it was more about the love of fighting and gold. 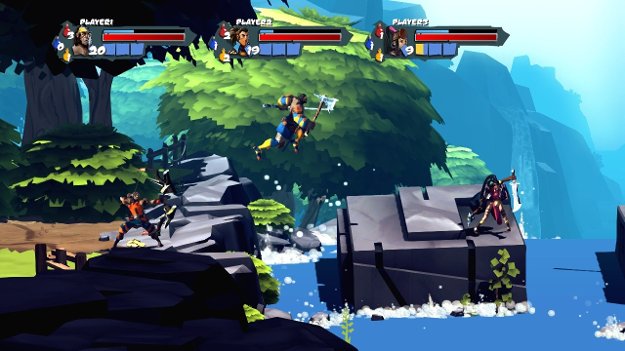 Anyone who has played the likes of Castle Crashers will feel right at home with Sacred Citadel. Combat is really swift and satisfying. Each bad guy you take down nets you experience to level up to unlock the next devastating combo or the next super move. The combat may seem to get repetitive once you unlock the combo that feels like it’s “the win move”, but that’s how these types of games are. Everything about it is repetitive; new level, mash on buttons until bad guys are dead, win. Next level, mash on buttons until bad guys are dead, win. But that doesn’t make the game any less enjoyable to play. It’s still a blast to sit down on your couch with two other friends as you wail on a boss characters. On a side note: I would like to point out that the game apparently only supports three players for couch co-op, but there are four characters to choose from leaving me to wonder why have four characters and only three players. Either make the game playable for four players or take away one of the characters.

Even with the four characters to choose from, the replay value for the title is really low. You can go through the levels again as a different one, but the standard moves are pretty much the same. The only difference comes from each character’s special moves. The Warrior deals big damage close range, the ranger likes to pelt enemies with high-speed arrow shots, while the mage and shaman can deal magic from afar. You can utilize the character’s special moves at any time, but you will more times than not be mashing away with your dual wielded weapons. Also, with the campaign being so short and rather easy, it really gives no incentive to go back and play the game again.

Sacred Citadel is a short-lived experience. Combat gets repetitive, but it is the fun of sitting down with friends button-mashing through levels that will see you through to the end. If you have ever played the likes of Castle Crashers, but don’t like having to go back through previous levels to find hidden items to unlock progression, then this is a game you should give a try.