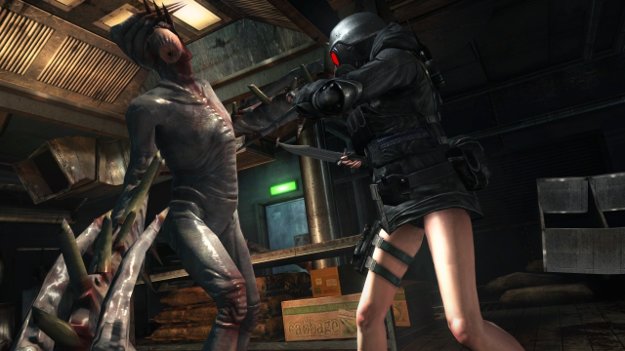 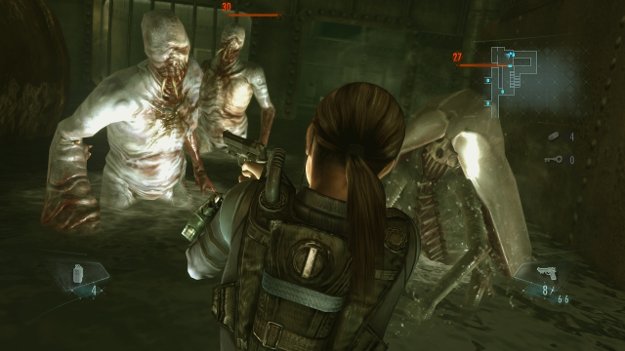 Resident Evil: Revelations first came out last year for the 3DS, and proved itself a capable Resident Evil title - in fact, many found it to be a better title than the big-budget RE title that came out months later, Resident Evil 6. With classic gameplay that had been missing from the series for a while, claustrophobic environments, and even an engaging multiplayer mode, Revelations showed that it was still possible to get a classic feel from a series that had felt lately like it had simply become a bog-standard third-person shooter. With the popularity and praise it enjoyed, it's not terribly surprising for it to be released on home consoles and people's PCs, allowing those without a 3DS to enjoy the game (only without, you know, the 3D).

The story isn't particularly riveting, but it follows the work of a small cast of characters - including Chris Redfield and Jill Valentine - as they investigate the work of a terrorist organization known as Veltro, and their connection to an event a year prior to the game that saw a floating city reduced to ruin. This investigation brings to light a whole type of new enemy, eschewing the standard zombie for something a little more...water-themed. Taking place mostly onboard a floating cruise ship, the environments are tight, forcing you to watch your back and be careful around every corner.

The game feels much more like a survival horror than the more recent Resident Evil titles - ammo is important, multiple enemies are dangerous, and the general atmosphere of the game is much more oppressive. Controls, however, are much improved, especially with the dual-analog controllers of the consoles it's being ported to. Moving and shooting is a breeze now (previously you had to hold a trigger to do so, and if felt pretty awkward), though the sensitivity for aiming doesn't feel quite right. It's like it's still calibrated for the 3DS's analog stick, making aiming awkward and flighty, which takes some time to get used to.

Graphics have been upgraded somewhat, but they're not going to blow you away. Revelations on the 3DS looked excellent, really taxing the hardware and showing what could be done with the system. On the consoles, it's got stiffer competition. That's not to say it doesn't look good, just don't expect the same results. The Wii U allows you to either put some of the information (map, equipment) on the bottom screen, mimicking the 3DS's second display, or if you want you can just play the entire game on the controller, freeing up the TV for other activities.

Multiplayer, for the uninitiated, is something called 'Raid Mode', in which you and, if you want, a friend battle through small mini-levels, cutting your way through enemies in order to reach the goal. As you do, you earn experience points and currency, allowing you to pick up new equipment and do more damage, taking on tougher opponents and levels as you do. It proved to be one of my favourite parts of the 3DS release, and I rarely play multiplayer games. But for a handheld title, being able to just jump online for thirty minutes or so, finish some levels and gain some equipment, and then turn in for the night was excellent, and I sunk many hours into it. Raid Mode returns, and while it hasn't changed drastically, it does have extra content - levels, characters, and weapons - for people who got it all the first time. Oh, and there's a new, tougher difficulty to play through, though that's not saying much.

Revelations is one of, if not the best Resident Evil game to come out in recent memory. That said, there's not a lot of extra content here to justify buying and playing through the game for a second time. The story is kind of forgettable, and there isn't really any replay value except in the multiplayer offering. So, unless you really enjoy Raid Mode enough to play through it again just to see the extra stuff you can unlock, this isn't worth it if you've played the 3DS version. But if you haven't played Revelations before, this is the perfect chance to do so, especially if you're a fan of the series.