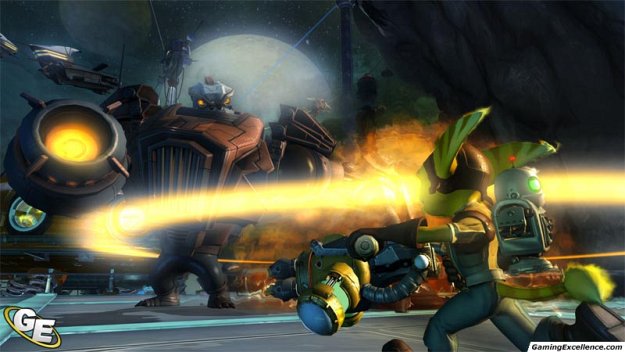 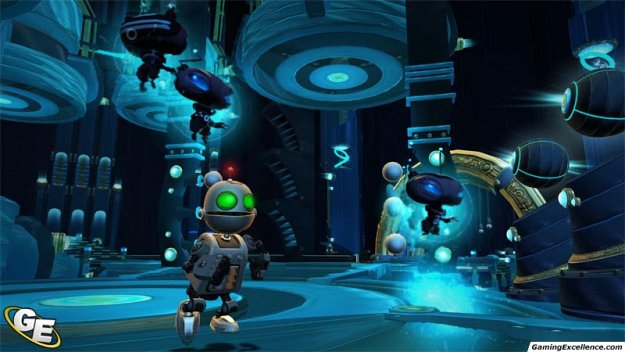 Get your Omni Wrenches ready folks, there's very little time left until the release of Ratchet and Clank Future: Tools of Destruction. Insomniac Games' dynamic duo is back for the sixth installment of the series on PlayStation systems as a PlayStation 3 exclusive. The last console title in the series is already nearing two years old, and gamers have been itching for more. Rest assured, R&C Future will provide much more than a satisfying scratch when it's released on October 30th.

GamingExcellence had a chance to sit down with a nearly complete build of the game at the PlayStation Holiday Preview Event on October 10th, which strongly resembles the demo now available on the PlayStation Network. The first level of the game sees our familiar heroes dive right into the action in Metropolis, a very busy ultra-futuristic city full of baddies. We were dumbfounded at the level of detail and the impressive amount of background activity taking place throughout the course of the map: flying vehicles constantly whiz by, other battles rage on far-away platforms, and buildings and bridges are bombed and torn apart by unseen assailants. One noticeable change is that the camera is forced in particular directions when your character is in somewhat uncontrollable situations, such as flying off a jump pad or grinding down steel rails. While this limits the player's ability to have a look around, it leads to interesting surprises: in one instance, Ratchet flies through the air after hitting a jump pad, and a particularly nasty looking robot slowly comes into view near the expected landing point. As the mechanical evil readies its weapons, Ratchet unexpectedly lands on another jump pad and bounces out of harm's way. The camera is particularly useful and effective when grinding down twisting rails, always giving the perfect perspective for controlling the character. In Metropolis, this also contributes to impressive visuals, as Ratchet descends rails spiraling around an exploding building, taking out pieces of the rail as it falls. We'll just have to ignore the apparent lack of gravity that keeps unattached rails in place.

Ratchet and Clank Future is, like the previous titles, really easy to pick up and play. Ratchet's default weapon is still the Omni Wrench and as such boasts a suitable array of hand-to-hand battling moves. Switching between hand-to-hand and ranged combat is as easy as tapping a different button, which is often very useful when battling large groups of enemies since a handful will typically be charging towards you. Changing the currently selected weapon is a little iffy though, because it requires bringing down a menu and using the thumbstick to point in the direction of the desired weapon, and it has some difficulty finding the options in the corners. We were privy to some familiar weapons like the Pyro Blaster and the Fusion Grenades but new combat devices were what we'd really been looking forward to experiencing first-hand. The Transmorpher, a device which turns enemies into harmless penguins, is neat but a little difficult to use since enemies targets have to be fairly close for the weapon to be effective, and this window is usually pretty short since they have a tendency to run straight at you. The Goovitron is absolutely hilarious because this device, when thrown, turns into a disco ball and nearby enemies can't resist starting to dance! It's a little too powerful though since enemies won't stop dancing even after being attacked so it's a little too much like temporary invincibility. We haven't been able to confirm whether it works on all enemies, bosses included, but it would appear that each enemy type has its own dance routine ready for your entertainment. The Grind Boots are used effortlessly by simply jumping onto a rail. Grinding effectively creates a speed-induced rush while being easy to control, not unlike the spinning antics of early Sonic the Hedgehog games. Near the end of the level, we had a first taste of the SIXAXIS functionality as a platform gives way and Ratchet plunges towards the ground, navigating between airborne traffic in skydiving fashion. As you can imagine, tilting the SIXAXIS controller similarly tilts Ratchet's body in a very intuitive character control method.

The game's graphics will absolutely blow you away. Though the environments will seem familiar, Tools of Destruction features an unprecedented level of detail not only in terms of textures and polygon count, but also most noticeably in map design. The Metropolis' buildings are much more imaginative and varied than previous titles in the series, and even the swamp level we've seen had no two similar areas. Additionally, the environments benefit from a deeper organic quality, evidenced by the many plants and other vegetation in the Metropolis and a swamp so realistic you can almost smell the wafting gasses expulsed from lakes of dark purple liquid. If that's not enough to get your juices flowing, Ratchet and Clank Futures is filled with gorgeous cut-scenes that rival the movies coming out of Pixar Studios.

Fun to watch and amazing to play, Ratchet and Clank may be doing more than defeating an evil overload in their latest adventure this holiday season, they may very well start selling PlayStation 3 consoles. I'm definitely putting this one on my wish list.

Ratchet and Clank Futures: Tools of Destruction is in development at Insomniac Games and is published by Sony Computer Entertainment. The game is being released exclusively for the PlayStation 3 on October 30, 2007. The demo is currently available on the PlayStation Network.