Ratchet and Clank Future: A Crack in Time (PS3) 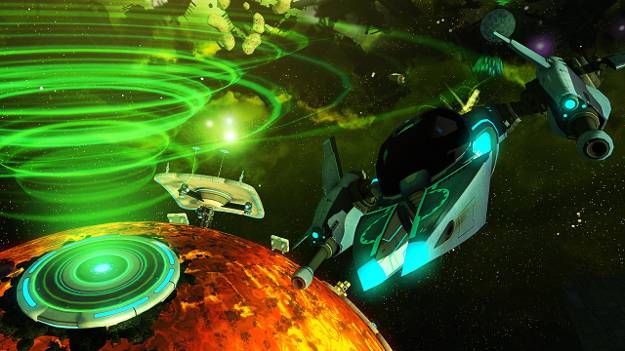 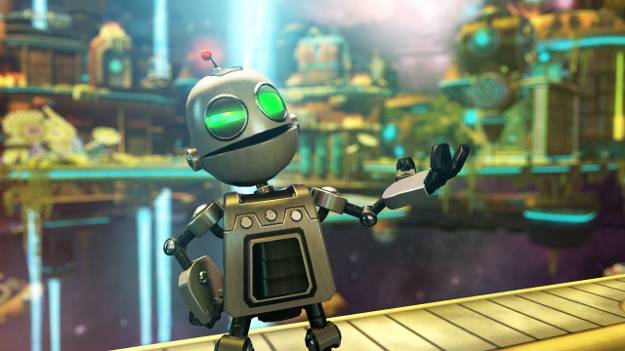 Ratchet and Clank have returned to the PlayStation 3 in an all-new adventure. The latest title, A Crack in Time, has fans of the franchise everywhere wondering what zany weapons has Insomniac dreamed up this time. The real question in my mind, following last summer's PSN release of A Quest for Booty, is whether Clank will once again be at the forefront of the storyline. The answer to these questions and more follows, fellow sidekicks.

No one would dispute the fact that one of the series' strongest points is its well-crafted plot. So it continues in A Crack in Time. The story picks up from the end of Quest for Booty, though those who skipped that one will find that the opening cinematic fills in the small gap since Tools of Destruction. The gist of it is that the mysterious Zoni have abducted Clank and have taken him to another galaxy, where he's been damaged. In a shocking twist, they've hired Dr. Nefarious (from Up Your Arsenal) to fix him. Nefarious plans to use Clank to gain control of The Great Clock, a massive structure built by Orvus (Clank's father) at the centre of the universe to repair rips in the spacetime continuum that have been caused by an abuse of time travel technology. Should the machine fall into the wrong hands, it could be used to alter time and eventually cause the universe to rip itself apart. So, given that less-than-simple setup, Ratchet must obviously find and save Clank before Nefarious achieves his goal.

In past titles, that would be all and well. However, Clank has found some gusto in his metallic underbelly and won't be taking it lying down. From the very beginning of the game, Clank will get his own parallel timeline and will find his own way to kick some cragmite. Despite the fact that Ratchet still claims a larger portion of the gameplay, Clank gets a lot more screen time than ever before (except perhaps in Secret Agent Clank) and has control of the most innovative features of this game. That's where the Chronoscepter comes in. Given to you by the junior caretaker of The Great Clock, this wand-like thing has the power to reverse time, effectively fixing all those things lying around the place that Ratchet would normally bash to bits for bolts. The genius part is that this thing can also throw time grenades, which displace a sphere of distorted spacetime where everything moves extra slowly. While this is often used for a whole new class of puzzles, it's often entertaining and hilarious to throw it at enemies, bash their head in, and watch the splatter slowly disperse. In a less graphic display, this effect works on the usual bolt boxes too. As a side note, the virtual training grounds where you're taught the mechanics of the Chronoscepter are visually impressive, featuring blue platforms that come together as you walk in an endless plane of white.

Clank also gets to take the player though a second new class of puzzles, one where Clank can perform actions and go back in time to do something else in the presence of his 'past' self. The basic puzzle is telling your past self to go press a switch to open a door, and allowing 'present' Clank to then go through it. Suffice it to say that the complexity ramps up quickly, allowing you to have multiple instances of yourself, which will have you scratching your noggin' in no time.

For all this expansion of Clank's role, Ratchet still has a huge part to play. Though we learn quite a bit about Clank's background, even more is once again revealed about Ratchet's storyline. In addition, Ratchet gets to play with all the awesome gadgets. I must say I was a bit disappointed with the arsenal in A Crack in Time, having been spoiled in Tools of Destruction. That title did set a pretty high bar, having introduced the likes of the Groovitron and Mr. Zurkon. It's not so much that there wasn't anything particularly creative, it's that you only really get the new stuff later on in the game. To compensate for that downer, GrummelNet (the weapons provider for the Polaris Galaxy) has some pretty hilarious product demo / advertisements for all of their weapons, with the extravagant humour typical of the series. Particularly creative were the Chimp-o-matic, a weapon which turns enemies into chimps, and the Sonic Eruptor, an ugly-looking creature which burps enemies into submission.

Ratchet's storyline features more of Captain Qwark in the field, and he's always quick to point our how much of an awesome sidekick you are. Meanwhile, he runs ahead, gets in trouble, and hides behind a rock until you save him over and over again. To make matters worse (and extend the story), he gets himself captured on multiple occasions, leaving it up to the 'sidekick' to save the day. All in all, Qwark adds some comic relief to the gameplay, as other characters will also help tie the story in with the maps a little better. But fear not, series lovers! The cutscenes are just as deserving of a Pixar movie as they were in ToD. Throughout the game, Ratchet will come across some fantastically crafted and varied environments, as the series has always maintained. The fractured time angle creates a setting for some pretty cool ideas, including giant boulders that break apart only to be put back together again, and seeing Aphelion (your ship) stuck in a time distortion which has it immobilized a dozen feet above ground.

Ratchet's gameplay has also been extended somewhat with free roaming space sections. Having removed the most annoying part of Tools of Destruction (leave planet 1, loading screen, annoying ship warping sequence x3, loading screen, arrive at planet 2), you'll now be able to fly between planets by yourself. In this mode, you can find a number of new side missions to grab more bolts, blast asteroids, engage enemy ships and land on moons. The moons are all small puzzles on a spherical environment (think Super Mario Galaxy, or that bonus mode in Sonic 3, but Ratchet & Clank style) which typically hide collectibles. As you progress in these side quests and challenges, you'll need to upgrade your ship with some extra tools and weapons. You do this by capturing Zoni -- the all powerful race that can't get outside of a glass jar now? -- and have them upgrade your ship with their technology. The Zoni seem to hang out on moons quite often.

This game feels very much like a full extension to Tools of Destruction: awesome new story, new game mechanics, new puzzles, new weapons and new worlds. The core graphics haven't changed, but they were already fairly stellar. What's a bit disappointing is that switching between Ratchet, Clank and Aphelion controls gets a little bit unwieldy. Ratchet and Clank share most of the main controls but they handle very differently: Ratchet has his hover boots and some crazy backflipping going on while Clank has the triple jump and glide maneuvre. Compound this with Aphelion's not very intuitive control scheme that gets more complex as you upgrade the ship, and you've got enough to break the flow of the game. That's incredibly unfortunate given that it's about the only annoying thing about it.

I must also call out the fact that we have yet to see a Ratchet & Clank multiplayer mode on the PS3. What gives? I'm sure it takes an impressive amount of effort to craft such a polished single player game, but maybe they could have fit a co-op option as Qwark or something. Nevertheless, the massive amount of collectibles, skill points and now trophies, there's plenty to keep you busy for quite a long time.

It's really no surprise that a dev studio and a game series with a proven track record of quality has produced yet another fantastic title, but it's much appreciated in a market where so much material is recycled. Fans of the franchise are no doubt already playing A Crack in Time, and this reviewer highly recommends the latest in the Ratchet and Clank series to gamers of all ages and skill.