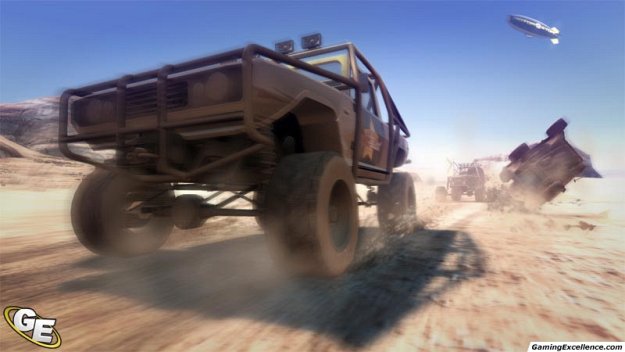 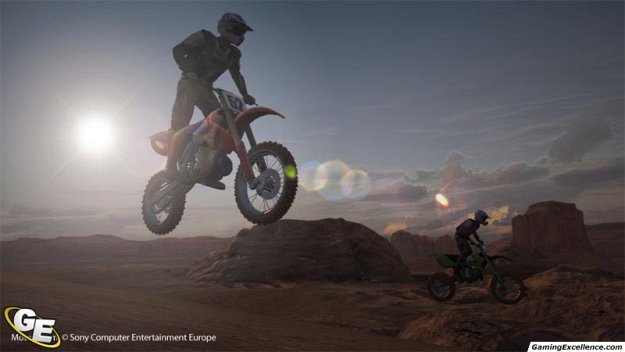 Initially shown off at E3 2005 as a series of rendered video sequences, MotorStorm was one of those games that surprised everyone with its fast-paced open terrain racing and gorgeous visuals. As one of the "near-launch" games for the PlayStation 3, SCEA really wanted to showcase the power of the system. Two years after the release of those video sequences, MotorStorm doesn't look as flashy or as polished, but it's a decent representation nevertheless. Unfortunately, to be successful a game needs to do more then look good, and MotorStorm is one of the shallowest racers I've ever played.

MotorStorm is a lot like a high school girlfriend - she looks great, is occasionally fun to spend time with, but you just can't see a lot of long term potential. Once you've circled a few tracks with a few different types of cars, stepped online for a race or two, and observed your vehicle blow apart into a million small pieces, you've essentially seen everything MotorStorm has to offer.

For starters, MotorStorm has one of the most poorly designed campaign modes I've ever seen. The campaign is divided into event tickets; each ticket is composed of various races in which to compete. As you complete the venues in each ticket, you'll eventually unlock other races and a wider array of vehicles. Where it falls flat is that some of the races are so incredibly difficult, and you'll have to advance past them to move on, it can leave a really sour taste in your mouth. Worst yet, MotorStorm does not offer any form of quick race option allowing you to simply pick a vehicle, a track, and set a few options. I'm bewildered how this option was overlooked; it's pretty standard fare on any modern racer, especially on a next-generation console.

But quick race isn't the only thing missing. MotorStorm has no support for split-screen multiplayer whatsoever; you're limited to competing online. In a game with so much potential, it's amazing how these seemingly basic features have been overlooked. That's not to say that the online component of MotorStorm is bad, in fact it's truly the best part of the game. Racing online, jumping between mesas, laying your bumper into an opponent or sending a biker to the ground is a highly satisfying experience.

While you likely won't delve much into the single player campaign, the actual gameplay in MotorStorm is hit and miss. In each race, you'll typically see a mix of big rigs, mudpluggers, ATV's, and dirt bikes. The tracks themselves are some of the more interesting elements since each track has multiple paths that you can take to try and gain an edge on the competition. Typically, larger vehicles suitable for deep mud such as the semi's and mudpluggers stay to the lower path. Smaller vehicles like the ATV's and bikes tend to have more success taking the high road, where you'll find tight corners and jumps not suitable for the larger beasts. Then again, given the option you'll usually want to avoid the bulky vehicles as they all handle like boats and are very difficult compete with online or off.

The somewhat open-ended tracks do give an interesting spin to the game and you'll certainly feel lost the first few times around as there's little indication that you're even moving in the right direction. The tracks themselves are quite limited in number, and are very much a hit and miss affair. While some are very open, allowing for plenty of freedom to move around, others are more tightly cramped and filled with obstacles to slow down the game even more. I did thoroughly enjoy some of the more open tracks, especially one in particular where you're hopping between various mesas, and each lap ends with a massive banked turn as a sprint to the finish. The cliff side track originally featured in the pre-release demo is another personal favourite; it's got enough speed and tight corners to keep you on your toes.

When you get behind the wheel and take to the desert landscape, MotorStorm tries to make you feel like you're on the edge of control and always on the verge of being passed. In that sense, it's very true, as the AI in this one has a very blatant elastic effect, where the AI changes its ability and speed depending on your performance. You can run a perfect race and still be passed in the last straight of the last lap, by a vehicle that you didn't see in your reverse camera a few seconds before, an overly frustrating occurrence when it happens. Surprisingly enough, the actual gameplay feels slow, it doesn't feel like your working the springs hard unless you're actually using the closest zoom (in which case you actually lose your peripheral vision on the bikes). In essence, you won't actually have a lot of close bumping-and-grinding on many of the tracks and you'll likely end up vying for position primarily based on the various routes you take and which ones turn out to be the fastest around the track.

Graphically, MotorStorm was designed to showcase the prowess of the PlayStation 3, and it does a fine job at that, unfortunately they seem to have added much of the details in the wrong places. The environments (a la mud filled pits) look good, yet the high concentration of browns (and bland textures) really take some of the luster away. The vehicles themselves also look as if they could use a bit more polish. With that said, when they explode, it's a spectacular display. Springs and tires go flying, debris fills the air, and a flaming wreck of a car slams into the ground below. When you're actually racing, upon crashing you'll enter a slow motion view where you see your car explode into a million tiny fragments. It's designed to both show off the graphics engine, and act as a time penalty for blowing up your car. Offline, it's just an annoyance after the first few times, but online (where some of the crash animations seem longer then others), it really slows the game down when you just want to get back on track. The various lighting effects and reflections show up nicely in the game, with the occasional lens flare as the sun blisters off your visor (or windshield), and as you head into the deep pits you'll see mud splatter on your display.

The game looks good, and does harness much of the PlayStation 3's power quite well, but with sleek visuals comes a price in the form of load times. MotorStorm is one of the worst offenders on the PlayStation 3 to date; the game just feels all around sluggish. Even in pre-race menus when you're simply scrolling between vehicles (of the same type) and vehicle colors, it's up to a ten second load time, which is completely unacceptable. It makes you want to just stick with the first vehicle you're given.

MotorStorm provides the ability to control the various vehicles using the Sixasis motion sensor on the PS3 controller; however from my experience, this is a completely useless and unnecessary addition. I haven't met anyone who actually races with it, because it's nearly impossible to actually be competitive when using it due to the erratic control schema. The Sixasis could have been put to a much better use, perhaps providing some in-air controls on the bikes or ATV's by shifting your weight instead of always nose-diving into a rock. Heck, even shaking the controller to clear the mud from your visor would have been a nice touch; unfortunately you won't find any of that here.

Audio-wise, MotorStorm has a decent soundtrack that seems to fit the mood and style of the game. For the most part it's a pretty heavy set of tracks, and while it's nothing spectacular, the music is pretty standard fanfare. As with other PS3 games, there's no support for custom soundtracks here, so if you don't like the music you're pretty much out of luck. The various sound effects seem to suit the game well, but again, are nothing overwhelming and don't particularly leave a lasting impression.

MotorStorm is the greatest love/hate relationship I've ever had with a game. On more then one occasion, I've walked away disgusted and incredibly frustrated. Other times, I'm incredibly pleased. It's almost as if it's some sort of Jekyll and Hyde potion, depending on the tracks and vehicles you'll be racing with, and if the AI decides it's going to nab that key position away from you at the last second. Then again, if you're hopping between mesas or heading online for some hard fought racing, then it doesn't get much better on the PS3.

Simply put, the biggest problem with MotorStorm is the lack of depth in the offline portion of the game. No quick race modes, no offline multiplayer, bulky controls on some of the larger vehicles, and extremely repetitive single player gameplay. The addition of leaderboards and a more streamlined online interface would also greatly enhance the replay value of this one. As an online racer, MotorStorm is an enjoyable experience, but is seriously lacking in features for anyone who prefers a single-player experience.