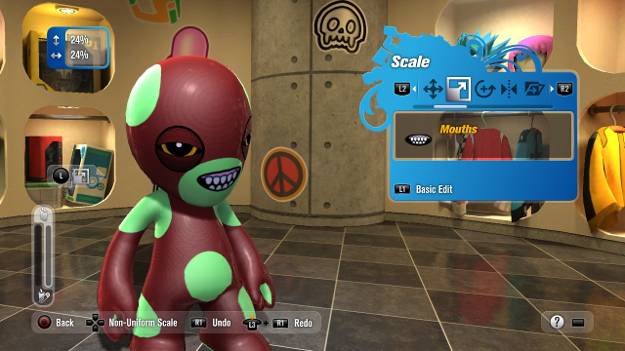 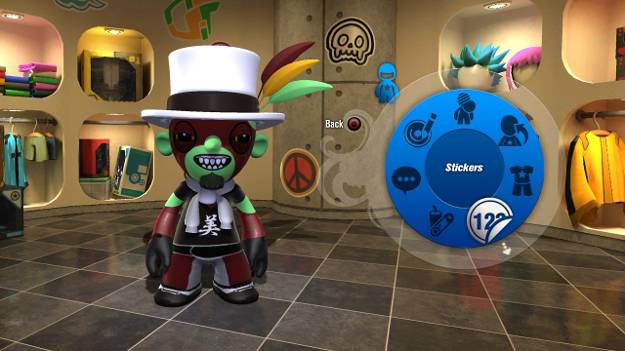 Vancouver developer United Front Games absolutely knocked it out of the park with its first offering. You'd expect some of the guys who made Need for Speed to put together a great racing title, but what's wonderfully unexpected is how much they've reigned in the douchebag quotient that makes racing games inaccessible to gamers outside the core demo.

By making the characters customizable vinyl toys, UFG removes the risk of testosterone poisoning from the play experience, and in doing so, opens the genre up to those of us who want something more challenging than Mario Kart, without losing the goofy fun factor.

Don't get me wrong, I like cars. Real cars. Real car shows are cool. Real races are cool. I've even seen Days of Thunder multiple times. But something about the pixilated variety just bores the crap out of me. I've played racers since the days of Pole Position – yeah, that's dating myself – but a lot of them don't hold me for very long.

... wait, did I just admit to seeing Days of Thunder more than once?! GAH!

The story is basically Pixar's Cars with a individualist rebel fashion bent, with races commentated by two characters named Bif and Gary. Gary is hockey pundit Ron Maclean mixed with everyone's favorite nerdy guy from the accounting department, and Bif is a cross between Don Cherry and Ed the Sock. Also, Bif frequently doesn't wear pants. The courses span similar locations to Mario Kart – Alpine peaks, deserts, beaches, jungles... blissfully, nothing as horrid as the Rainbow Road level. You play a driver named Tag who is destined for creative racing greatness with the help of a gal pal auto detailer and a cranky pit boss. Your enemies are Conservative Motors, their boring products, and their number one bum boy, Espresso. Espresso is, ironically, a mustachioed Italian with a monkey sidekick.

I actually only wanted to review ModNation Racers because I thought my husband – a Mario Kart and Little Big Planet fan – would like it. And I was right: it's bright, cute, and casual-friendly in split screen mode. Furthermore, career mode teaches you the finer points of play as you progress... if you play it. I keep trying to get him to play through the early campaign levels for the tutorials on drafting, drifting, and using the various weapons and interactive environmental elements, but... nope... nope... he's happy just playing co-op and asking me which buttons to push.

But sticking to the co-op mode, which feels nearly identical to Mario Kart with a few extra functions, doesn't expose you to the versatility and depth of Mod Nation. After some play time in career mode, it's clear that Playstation's "Play, Create, Share" mantra is alive and well, which means a near-limitless amount of user-generated content, and lots of additional bang for your purchasing buck, even with just the options that come bundled with the game. If you shell out additional cash for DLC, there's even more to do, and I'll admit to having spent more than what was reasonable on $0.99 LBP outfits, even as I hesitate on $10 expansions for other games.

Even without a single cent spent on extra accessories, however, I was still able to create some pretty interesting looks for my little vinyl driver and his/her car. The customization tools are intuitive and, with a little practice, fairly easy to use. The most finicky thing were the stickers, and there's room for improvement with the textures, but I was still highly impressed with how functional and adaptable the options were. Furthermore, the game allows you to find and collect tokens while you race. The tokens serve two purposes: even if you come in dead last, you have something to show for it if you find those tokens, and the things you can get with them to add to your character and vehicle are really pretty sweet. My favorites were the garbage truck and the choo choo train vehicle bodies, although the spaceship was also awesome.

So far, my proudest customization achievement has been to make my racer look like Cheetara from Thundercats. I uploaded that one, even though I'm usually embarrassed to share things like that.

Equally impressive was the track builder, both for its ease of use and what you're able to do with it. It is possible to build a fully outfitted, functional track in under five minutes thanks to ingenious auto complete functions. It's also possible, however, to get in and spend hours designing a track of time, space and death. Building tracks is harder to learn to do than the character and vehicle customizations, and there were a few moments of frustration as I struggled to dope things out, but that was probably due more to me being an idiot and having played the game waaaaay too long by the time I got down to brass tacks building something. Once I got the hang of it, however, I was impressed by how much I could do with what was available right from the start. The customization only gets greater as you unlock and purchase building tools.

There is room for improvement with the view options and the precision of object selection, but you adapt to that. Compared to Little Big Planet's level builds, making ModNation tracks is a breeze.

The only thing about Modnation Racers that is a definite flaw is the load times when loading a new track. The best way to play is to load a track and plan on numerous races on that track, instead of jumping around. Because I was able to do things like brush my teeth and put away laundry in the expansive chasms in entertainment that are the load progress screens. At first the game's caffeinated techno music seems hip and badass, but eventually you hear it so much on those pieces of gaming purgatory that you swear it's the music they play in hell. Eventually they start feeling like commercial breaks, which turned out to be a blessing in disguise: I got up, got another diet coke, stretched, cleaned the litter box... but bah! Gaming is not about being productive! Shame!

But I'm old school, so I thoroughly enjoyed the game despite lengthy load screens (in my day, they were a frequent occurrence in PC AR-PEE-GEEs, sonny!) So if you can look past this somewhat serious flaw, the rest of the game gives you a lot to love. Because of the customization, there are endless hours of play time available... in fact, that's why it took me so long to write this review: I kept waiting for a ceiling that I never hit. It's a game that makes you feel like there aren't enough gaming hours during the summer months. After all, I still have to build a Thundertank car to go with Cheetara!