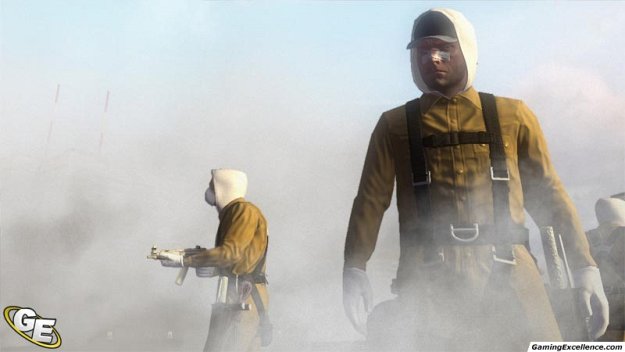 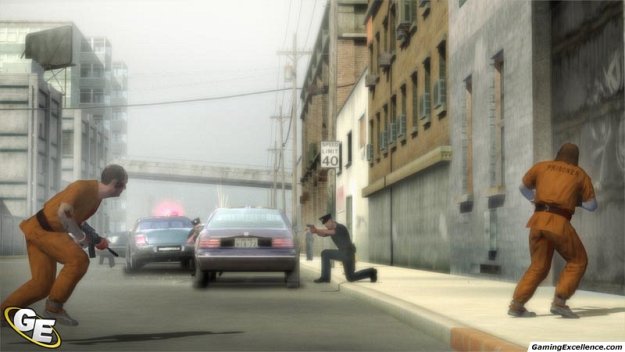 Eidos' Kane and Lynch: Dead Men is one of few much discussed action titles to hit the PS3 for the holiday season. Its high production values and cinematic presentation is obvious to anyone who plays the game, but while the game excels in some areas, it falters heavily in others. And when you've got such high peaks, the low valleys really feel much, much lower in comparison.

Things start out well. The title gets you quickly acquainted with Kane, a ruthless ex-mercenary now on the way to death row, confessing to himself the bad things he's done in the past. He's apologizing to the daughter he abandoned in the form of a letter. It's poignant scene, made better by some excellent voice acting that is prevalent in nearly every facet of the game. Things get hairy really quick, however, when the prison transport driving him and his co-passenger comes under attack and bullets start flying.

Apparently, Kane stole something from a group known simply as The7 and they want it back, enough to execute a daring get-away operation for Kane and his new-partner, Lynch. Lynch is…unstable, to say the least; a medicated man that tends to shoot first, hallucinate later… then shoot some more. Kane is unfortunately stuck with him, and if he ever wants to see his family again, he had better do what The7 want.

The plotline, characters, and overall presentation are a couple of the things that Kane & Lynch does really well. Characters are deep and involved, evolving as the game progresses to show various sides of themselves. It's not easy to pull off, but you begin to feel an attachment to Kane, a man that has accepted his sins yet must revisit them to save the ones he loves. The story is tough and unrelenting as two terrible men must do terrible things for good reasons.

The game itself is a third-person shooter, viewed from behind and to the right of Kane as he runs around doing his work. You run, you gun, and you stay behind cover, unless you want to get killed really quickly. In an interesting twist, die, and if your teammates are available, you'll get a shot of adrenaline straight to the chest, enough to keep you going for more. Take too many shots in too short a timespan and you overdose, with a game over for you.

The gameplay is decent in general and is certainly nothing that we haven't seen before, but in a few key points it falters heavily and severely affects gameplay. The first is the cover system, something that arguably is one of the most important facets of the gameplay, since it's essentially what's keeping you alive. As you approach a surface that you can cover behind, Kane should automatically snap to the surface and you can shoot and aim from behind it. But it just doesn't work as well as you might think. There are numerous problems with this system. First, actually snapping to a surface is a hit-or-miss operation, and more often than not you'll find yourself running madly into a wall, wondering if you're even going to push your back against it at all. And, when you do connect to a surface, you'll occasionally do nothing but clip through the wall you're next to when you try to shoot around it, and merely hit it with your bullets, accomplishing nothing. There's a bit of a trick to it, but it's not at all intuitive and may require quite a few hours of multiplayer gameplay before getting used to it.

The AI presents another series of problems. Sometimes, it's pretty good, and your enemies and allies alike will take cover, keep out of your way, and not get killed. You're able to give simple commands to them (go here, attack him, follow me), but usually they manage well enough on your own. Other times, however, the AI will be pretty stupid. Sometimes enemies will hide behind cover that doesn't exist, other times they'll hide on the wrong side of the cover, giving you a perfect shot right at them. Or at least you should get one: the guns are so wildly inaccurate that hitting anything is more a matter of pointing your cross-hairs at an enemy and hoping for the best than actual accuracy. It's nice to see realistic ballistics for once.

Though the single player is an extremely well presented tale, what might catch other attention is the multiplayer experience, affectionately known as 'Fragile Alliance'. Here, money is the name of the game, and betrayal is the…tool of the game. Or is it guns? Maybe betrayal is the ball and… Well anyway, you and one to seven others are off to a money grab. Sounds simple? It is, except that whatever loot is gathered is split between each of you. And, well, why split loot four ways when you can split it three ways, if you get my drift. Though all players start on the same team, it often becomes profitable to lighten the load and run off with all the money. Players who kill a team member become traitors and, if they make it to the escape van alive, will retain all the money they've collected.

But there's more. While simply killing your teammates would be a trifle, they respawn as cops, and now are gunning for you. Moreso, because for any cash they find, they get a ten percent 'finder's fee.' Additionally, killing traitors earns you special rewards (doubly so for revenge kills) and traitors wear black suits for the next round, so people are more wary of them. The result is a tense match that makes you wonder who's planning what, and creates a very interesting mode of play that I've not seen before, one that fits the theme of the game perfectly. It would just be better if there were more maps to play on, as the selection is pretty limited. One can only hope that Eidos will release additional maps via download to complement the existing four. The only considerable problem with the multiplayer mode is the "quick game" function, which seems to cause the game to reboot more often than not. However, one can simply ignore it in favour of the "custom game" which adds the additional step of selecting a game room manually.

In addition to the excellent voiceovers in the game, the music does a pretty good job at creating an atmosphere that matches the game's mood perfectly. The graphics are also quite impressive, as characters come to life with impressive-looking facial expressions and movement, creating an even better cinematic experience. In particular, bullets can destroy the environment to an unprecedented level, not only knocking off corners of stone walls but also giving the player the ability to shoot out glass of varying resistance, blow out tires, make cars explode and vaporize marble statues. In one particular scene of the single player mode, a large-scale shootout occurs in a stone plaza and the resulting flurry of popping stone produces a spectacle worthy of Hollywood movies.

There's a lot to like about Kane & Lynch, but there's a lot to really hate as well. It's perfect for someone who enjoys a solid story and depth in their characters and doesn't mind glaring problems in their gameplay. For others who crave a strong third-person shooting experience, emphasis on controls and action, they're going to be sorely disappointed with it. If the major flaws didn't permeate every aspect of the gameplay, whether multiplayer or singleplayer, then the title might be worth mentioning for more than the plot. As it is, however, the game just can't be recommended to most. Like the protagonist Kane, it's decent but has too many flaws for comfort.