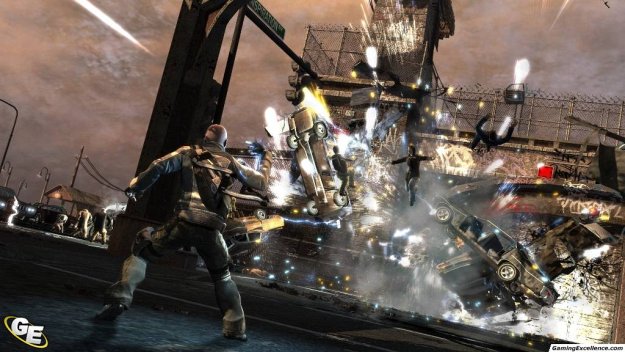 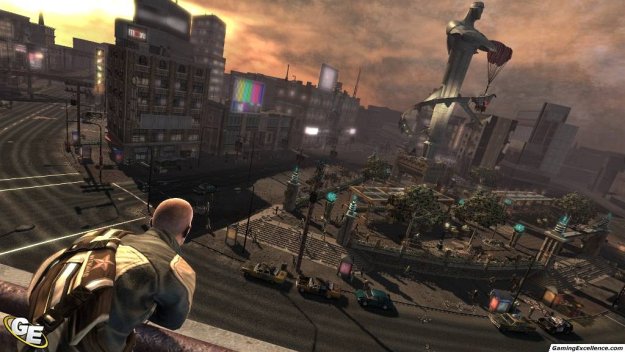 The superhero open world game is starting to get real popular suddenly. Between Spider-Man, Hulk and Crackdown, these games are some of the best open world games out there. Mixing superhero powers with the ability to run all over an interactive city is a blast which is why we're seeing so many of these games. Civilians can either be protected or punted hundreds of feet through the air at your whim while climbing around these virtual cities is a game in and of itself. Sucker Punch, of Sly Cooper renown, have joined the fray with inFamous.

At its core inFamous is the origin story of Cole MacGrath, a bike messenger who finds himself granted electricity based super powers. Throwing electric blasts from his fingertips, concentrating it into bombs or even simply sliding across power lines he is a living battery. However the circumstances that grant him his powers, that of his home city blowing up thanks to a package he himself opened, have left him as a powerful force in a city on the edge of self-destruction.

With the city under quarantine Cole finds himself the only force that can truly stand against the gangs that have taken control of this city. Starting with the Reapers in the Neon district it's up to Cole to remove these threats. While it might not sound like much when you first think about it there is a lot to the story here mostly due to the interactions of Cole, his girlfriend Trish and best friend Zeke. The story expands beyond these three but the main players are what really make the game feel more grounded in reality, helping it resonate with the player.

As with many other modern games numerous morality choices will be made throughout the game that let you either be the savior or tyrant of this city. These choices, many of which are actually somewhat difficult to make, really give you the feeling of being a deciding factor in the lives of these people. But since you are repeatedly blamed as the cause for the sad state of this city by a DJ who regularly broadcasts to the people, a DJ who loathes you and refuses to give you credit for your actions, you might find yourself bitterly wanting to be evil even if playing as a good guy. It takes just about everything at your disposal to not start frying some civilians sometimes when you listen to him put you down or the government taking credit for your actions.

Then again the way people react to you really helps with this immersion. If you choose to play the savior then civilians will start cheering for you as you pass them. Some of them will even begin to help you fight off the gangs, throwing rocks at your enemies when they attack you. However if you're playing the bad guy then the tables are turned. Citizens will usually run in fear from you or those same brave souls might start throwing rocks at you instead.

Obviously the main selling point of inFamous is going to be the powers and missions. These points are where the game starts to crack a bit.

Over the course of the game you will get numerous power-ups that take the form of enhancements to your powers or brand new ones. There are two paths for each power, one for good characters and one for evil. The good ones are generally more precise or defensive while the evil ones are much more destructive, causing wide scale destruction with each attack. However most of these powers are fairly redundant or of really dubious use, leaving you likely to ignore them for a good portion of your game.

In fact many of them are even less useful if you're playing as a good character since only the evil ones really get powerful enough to be bothered with. This is doubly true when you consider that it costs you energy from your bar to fire off these attacks meaning that you're limited in how often you can use them. With the most useful of the skills in the game, Precision aiming, taking a whole lot of energy per shot it restricts you enough to rendering them yet more useless. More likely than not you will ignore some abilities entirely until you find a very specific situation in which you finally remember them and put them to some use.

Even if this is the case it doesn't really put too much of a damper on the game itself. Skating across a live railroad track while deflecting rockets launched at only to leap through the air and blowing away a group of enemies with a well placed electric bomb is an absolute blast. By putting a lot of effort and style into the combat you can perform a number of enthralling combo attacks that are limited by only your imagination.

Like many games of this genre the missions start to get a bit redundant after awhile. There isn't the hugest variety of them in the game so by the time you've put a good ten hours in, completing the first island, you've seen most everything that the game really has to offer. While some missions can be surprisingly fun overall they can get a bit too repetitive too quickly. This only adds on to the frustrating that can be brought on by the constantly, and rapidly, respawning enemies that plague this entire game. However the main quest missions are really interesting which does a lot to help alleviate the repetition and all of the boss fights are genuinely fun.

Possibly the biggest weakness of the title is the graphics. They don't look as good as many of the better games that the PS3 has to offer, such as Killzone 2. This was very likely done as a trade-off with frame rate; reduced graphics so that you can get more models on the screen without slowdown. There are numerous graphical issues that are far less forgivable. While the character models look pretty good there's graphical tearing in the environment as well as clipping and a whole bevy of other small issues.

One of the weaknesses that many open world games have is that they usually lack any sort of soundtrack. There's a theme of sorts that plays every now and again but the one constant is the excellent voice acting. Many of the random pedestrians sound incredibly familiar to video game fans, Rained from Metal Gear Solid is now a black photographer for example, but everyone gives an excellent performance. The entire cast gives spot-on performances that do their best to make you care about the sometimes ludicrous plot developments.

Realistically someone could have labeled inFamous the mutant offspring to Assassins Creed and Crackdown. It blends some of the best aspects of both of these games while also inheriting some of their worst flaws. There isn't too much here that we haven't seen before but the experience itself is worth exploring. It's when the whole picture starts to come together that some of the seams begin to show. But if you persevere then you will be rewarded by a great story with rich characters and fun gameplay.