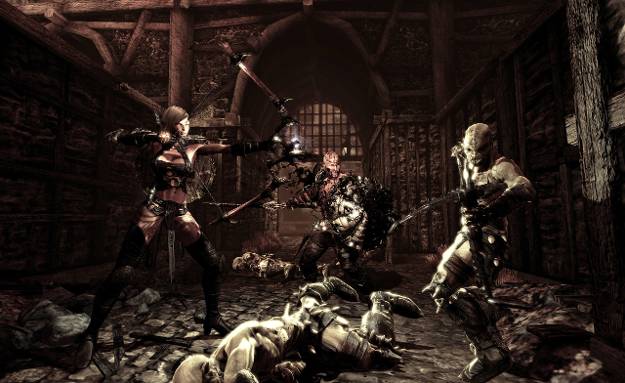 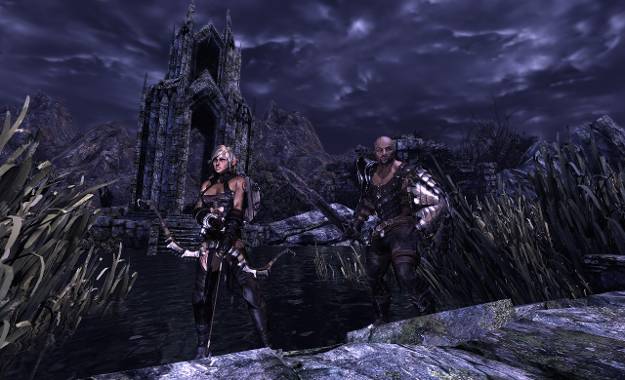 There are few games out there that manage to be both amazing and terrible. The vast majority of games are somewhere in the average range, some above and some below. There are a few stand out titles and those games that are intensely terrible are pretty rare as well, unless you own a Wii that is. Hunted: the Demons Forge is a game full of great ideas but the execution for them is so horrifically bad that the whole game ends up being a seething pile of trash.

Hunted is a game that follows the mercenary pair, Caddoc the warrior and E'lara the Elven archer. The two are roped by a spell caster named Seraphine into stealing an artifact called the Deathstone from its resting place. That's... about all the game tells you until you basically complete the game. Beyond a few cutscenes after beating two of the bosses you get no real plot which is one of the major problems with this game.

A dungeon crawler without any real plot is perfectly fine. But the problem is that Hunted does indeed treat its plot like an important part of the game. This isn't like Torchlight where the plot is "Go investigate that dungeon" and instead constantly has the two heroes banter about what's going on. There are also numerous scenes where they chat with Seraphine but none of this advances the plot in the slightest, it's all basically just background noise.

See the problems with this game go all the way down to basic game design decisions. It was created to be a hack and slash but you can't carry more than one weapon (or two later on) and there's no commerce system so there's no reason to go loot happy. Since it's designed to be like a third person shooter the melee combat is so sloppy that ranged combat is the only real way to go. Oh and while designed to be a two player game the most enjoyable way to play it is single player while playing as E'lara since Caddoc is terrible in player hands but the CPU uses him like a monster.

Hunted is a game of really poor dualities. The developers created parts of the game with one idea in mind but never realized how poorly it was implemented.

A good example of this is the stage design. If you play the levels as the game designers clearly intended you to, exploring every side area as well as solving all of the puzzles, then the levels can take upwards of two and a half hours if not more. But the levels themselves are pretty short, taking about a half hour or hour each if you go from beginning to end. These side areas would be great to explore for loot in a true hack and slash like Diablo or Champions of Norrath but in here they're busy work.

The problem is that you can only carry one weapon at the beginning of the game. For Caddoc he gains the ability to carry two swords shortly in while E'lara will be able to carry two bows. But it takes a while before you can carry more than two weapons or change your side weapon (Caddoc's crossbow and E'lara's short sword) so you don't need to explore these sub-areas as your only reward is yet another weapon that may or may not be more useful than the ones you're already carrying. Since you can't sell these things there's no reason to find a bunch of vendor trash.

Weapons are handled in much the way they would be in a real hack and slash with damage, durability and elemental effects figuring in to what you use. But as the durability drops there's no way to repair your weapons so those awesome swords you found with low durability are basically useless. Don't become too attached to anything you find. To make matters worse one of your weapon slots is likely to be a torch so you can even see where you're going instead of having a good weapon. That's great.

All of this sounds like nitpicking but it's a fundamental problem with playing the game. The hack and slash elements are just too poorly implemented within the game itself. If each of these sub-areas contained permanent upgrades it would be much more reasonable to explore them.

Some may say that the game indeed does have upgrades in those areas in the form of the crystals you find. These are used to upgrade your characters special abilities, ranging from magical spells of fire and lightning, or just different ways to use your weapons. Caddoc gets a pretty powerful charge attack while E'lara gains your typical elemental arrow attacks for example. But these crystals are so plentiful that with only a minimum of exploration you'll have more than enough for most of the game so, once again, there is little reason to explore these massive side areas.

There is a level up system in place here as well, something of a nod to the hack and slash feel of the game, but this too is poorly conceived. Want to improve your melee attacks? Kill lots of enemies in melee. The same goes for ranged combat. Completing objectives gains you more health, more magic, the ability to carry more revive potions and just generally greater survivability. This sounds like a good idea until you actually play the game and realize it too fails.

Enter a new area and need to get a few melee kills? Well what do you do when all of the enemies are up on the walls and can't be engaged? If you're Caddoc then this is doubly aggravating as his crossbow is pretty freaking terrible. Need more health? Kill several hundred enemies and gain a small boost. Great. To put it simply any part of the game that makes it more playable takes forever to unlock and barely adds anything to make your life easier by the time you get it. This is especially notable due to the fact that your characters have all the durability of wet tissue paper so all those health boosts and revive potions would have been incredibly useful early on.

And why is there mana and revive potions but no health potions? Just taking cover and regenerating it doesn't work well when the enemies are easily able to overtake your position or attack from the high ground in basically every area.

The areas that this game excels are the graphic design and audio.

Every aspect of Hunted has this dark, dirty and massively dingy look to it. It gives this game an incredibly gritty but yet realistic feel to it which is always a nice change from the more common, bright lit and cheerful looking fantasy settings. Caddoc and E'lara both look great although their character designs are fairly minimalist. The enemies on the other hand look very detailed and their varied appearances are possibly one of the best parts of the game. The demon you see at the end of the prologue is just intimidating as hell.

The audio is also quite enjoyable as it's basically limited to plot exposition and snarky one-liners from the heroes. Listening to the two mercenaries as they quip back and forth is actually quite funny unlike in most other games with this sort of chatter. Both of the characters have distinct personalities that really complement each other and are nice to listen to. Music is pretty understated and doesn't stand out too much to enhance or harm the game, although the boss music stands out positively.

Honestly Hunted: the Demon Forge is one of the most aggravating games of 2011. It has a whole lot of potential that could really have made for a fantastic third person hack and slash title. Instead they went for Gears of War with swords and bows, added a few RPG type elements and then called it a day. With just a bit more love and care this game could have been a fantastic co-op experience. As it stands it fails to match up to any of the games that clearly served as inspiration for it.