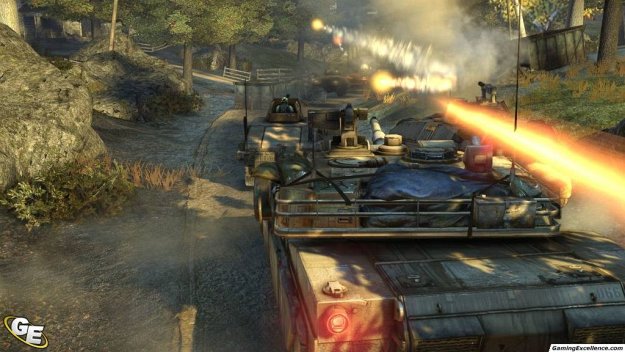 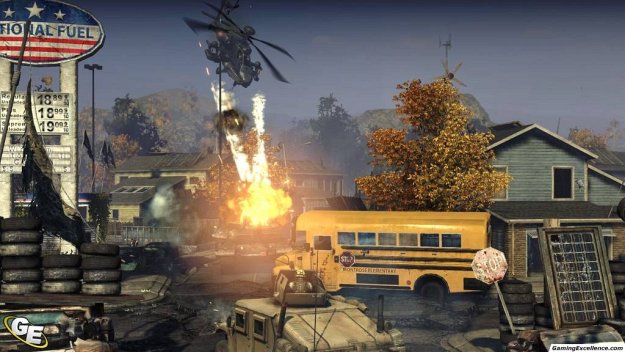 We recently had an opportunity to get an early hands-on look with the multiplayer aspects of THQ and Kaos Studio's upcoming shooter Homefront. At E3 earlier this year we had an opportunity to check out the heavily cinematic single player offerings and another opportunity to ask the developers some tough questions; we'd encourage you to check out those in-depth previews to get some background on the story of the game. Prior to this event little was known about the multiplayer offerings of the game, but after spending some time with a very early build and speaking with the development team, I can make two certain statements: it's ambitious, and it's fun.

The principle design element of Homefront's multiplayer offerings is that it's a large scale warfare game, offering "on-the-fly" strategic choices. This translates to large maps, lots of players, and a system that allows you to instantly buy items and weapons on the battlefield with the press of a button. A modern military shooter offering both ground and airborne vehicles, as well as drones, it's best described as a combination of the Battlefield series and the Call of Duty series, with a few unique elements that make it differ from the rest of the crowded space.

Stepping into a match, Homefront feels right at home for any experienced first-person shooter fan. While it definitely needs polish (the build we were playing was pre-alpha), the shooting controls feel familiar. In terms of gameplay, we were expecting more of a Call of Duty level of realism; while the multiplayer elements feel much closer to Battlefield's style of gameplay which is a less realistic take on the shooter genre. The multiplayer mode we had an opportunity to experience was called Ground Control, and we went hands on with two maps. The first of these was an eight-versus-eight match on Cul-de-Sac, a former suburban neighbourhood turned into a warzone, with an extremely high level of detail in the close-quarters battlefield. The second map was a sixteen-versus-sixteen player battle, on the much larger Farm map. Featuring wide open spaces perfect for vehicles, the defining point of the map was a church steeple perfect as for use as a sniper nest. As the match progressed, the waypoints and objectives on this map shift, a nice touch to keep the game feeling fresh during a longer match

One of the key features that makes Homefront's multiplayer different is the innovative use of a "battle points" system. While competing in matches, you'll earn these battle points by killing enemies or drones, assisting in kills, completing objectives, or virtually any action that is beneficial for your team. These battle points can be spent in the match to purchase additional ammunition or weapons, or saved up to purchase larger items like ground or aerial drones, or massive hellfire air strikes. Rather than the Battlefield model where vehicles are scattered around the map and on first-come first-serve, you can choose to spend your battle points to respawn with a vehicle or aircraft. That leads to the question, to buy a drone or a rocket launcher now, or save up for a few minutes and purchase a larger tank or attack helicopter to inflict massive damage on an opponent. It's an interesting dynamic that offers a unique element to the tried and true multiplayer formulae, and leads to more intense battles as a multiplayer match progresses.

As for weapons and vehicles, we've only seen a small handful of what's been promised, but so far we've experienced humvees, tanks, and attack helicopters on the vehicle and aircraft side. Your arsenal includes your standard assault rifles, sniper rifles, machine guns, pistols, missile launchers and rocket propelled grenades, but it's the drones that really captured my attention. Homefront offers three different kinds of drones: aerial recon, aerial attack, and ground attack. Once purchased, you'll be able to enter these drones in a third-person perspective, flying them around the level and assaulting enemies from a safe distance away. That said; you need to strategically hide when using a drone, as your character will be vulnerable if enemies approach you on the ground.

The Homefront developers have mentioned an experience and unlock system, but little is known about it at this time. As well, Kaos Studios plans to have dedicated server offerings for both the PC and console versions with the intention of reducing lag and improving the experience for larger matches. More details to be announced at a future date.

Homefront already wowed us at E3 2010 winning our Overall Game of the Show award, and we walked away from our multiplayer demo quite pleased at the direction of the game. Set to ship in March 2011, stay tuned for an in-depth single player preview in the next couple of weeks.