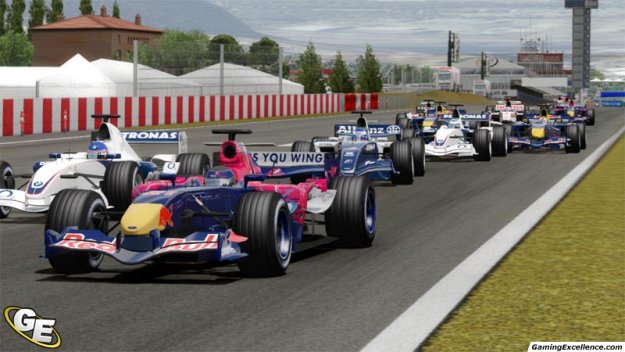 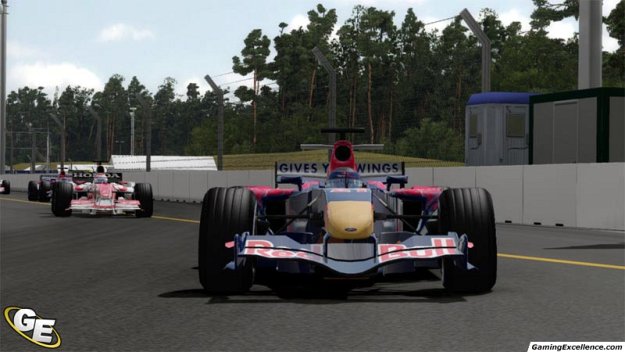 It's widely known that the PS3 has few exclusive games at this point, with the only "pure" racing games being Ridge Racer 8 and the recently-released MotorStorm. And while Formula One Championship Edition isn't going to encourage naysayers to run out and pick up a PS3, it's a welcome addition to the series and the PS3 in general. To make things better, Formula One CE is a very decent racer in and upon itself.

Balancing the fine line of a simulation and arcade racer is a challenge. Providing an experience that closely resembles a pure simulation (much like the previous releases in this series) really reduces the accessibility to those unfamiliar with the sport, or those without the time to commit to mastering each track. By the same token, a racing game based on Formula One could easily alienate fans of the series by being too arcade-oriented. Fortunately enough, Formula One CE provides a healthy balance of both styles of play, making the game accessible to everyone through various "assists", while providing simulation elements and various difficulty settings to please hardcore fans of the series.

The game offers up a variety of modes, both single and multiplayer. In terms of single player, you can step into the action with a Quick Race, or head out to a track and master every corner in Time Trial. Grand Prix Weekend allows you to race in a series of events over an entire weekend, and World Championship allows you to tackle an entire season at a time. Finally, the career mode puts you in the seat of an up and coming driver, and over a period of five seasons you've got to work through the ranks to eventually become a World Champion.

The game is based off of the 2006 FIA Formula One Championship, meaning that many of the rosters and teams are out of date. As such, you'll find drivers like the now retired Michael Schumacher, and Juan Pablo Montoya who now races in NASCAR, are featured in the game. Offering up eighteen different circuits from around the world, including Monza, Nurburgring, Melbourne, Monaco, Indianapolis, Barcelona, Silverstone, and Montreal, the tracks are well modeled and reflect their real-life counterparts with a good level of accuracy. As Formula One takes a backseat to other forms of racing in North America, those unfamiliar with the sport probably won't recognize these out of date rosters. With the 2007 season right around the corner, this is a questionable decision, but perhaps it's for the best to include some of the better known drivers like Schumacher in the lineup for the North American market. With that said, for true F1 diehards, you'll likely be a somewhat disappointed.

Upon loading up the game, you'll quickly notice the somewhat bland presentation of the menu system. The basic UI is very sparse, and a little clunky to maneuver around. Unfortunately, this reflects the multiplayer portion of the game as well. Stepping online, you'll discover that the various servers are divided into channels. After getting into an online game, you'll quickly discover these menus to be somewhat unintuitive and quite lacking. Heading out onto the track for some multiplayer racing, I immediately realized what was missing from the online component - voice messages. The game offers chat support for text, however there is no support to speak to your opponents using a headset, something that I've found to be essential to really capture the excitement of racing online. Unless you have a keyboard attached to your PS3, you likely won't do much chatting in the game, as it's much to slow to enter large volumes of text using the standard input mechanisms. For the most part, my online experience was lag-free, and since most servers I've found have collision detection turned off (essentially you just move through your opponents as if they were ghost cars), it turns into a race where you take on the track and not your opponents, per say. So I've gotten into a groove and am tackling the last few corners of a difficult track, the leader has just crossed the start/finish line and won the race. Directly in the middle of my screen, I see "Player has gone to the lobby", obstructing my view of the track, and seriously disrupting the flow. You'd think the developers would have considered moving the text to a place where it wasn't in the middle of the screen, a really serious oversight. When stacked up against a game like Forza Motorsport, Formula One CE is quite barebones in the multiplayer respect, but it's still playable to those who want to step online for a few laps of F1 racing.

Stepping onto the track, the gameplay mechanics really balance this arcade and simulation perspective. By default, all of the various assists are turned on (traction control, braking assist, etc), which make the driving model much simpler. If you'd prefer to take the simulation route, you can turn all of these assists off and take your car out for a much more realistic ride. Stepping behind the wheel, I found that the cars stick to the track pretty well, although I noticed a few quirks in the handling of the cars. For starters, heavy braking seems to make the handling behave somewhat strangely, it's difficult to describe. As to be expected, the tires lose grip, and it seems almost that the car enters a forced spin. The mechanics if you lose control seem somewhat pre-determined, and don't respond that well to corrective actions as one would expect of a simulation. Aside from these quirks, the driving itself is quite enjoyable, the game really offers up a sense of speed, the car vibrates as you increase the velocity of the car, and you sometimes feel as if you're on the verge of losing it all, which keeps the racing interesting.

Control-wise, you can use the default control scheme (similar to that of Gran Turismo), but also have the option to use the various triggers as your throttle and brake, among several other pre-defined setups. The Sinaxis functionality itself isn't well utilized, the game allows you to tilt the controller to steer the car, but I didn't find it all that responsive. For those unfamiliar with the tracks, you can turn on a racing line assist, which provides a line around the track and roughly indicates when you should apply the brakes for each corner, similar to the one in Forza. However, unlike Forza, the racing line in Formula One CE isn't dynamic. In Forza, if I'm moving slowly through a corner, the line dynamically turns green, indicating that I can speed up, if I take a corner too hard the line automatically goes dark red indicating I'm coming in too hot. In Formula One CE, the line is pretty much painted into the track, so if I overshoot a braking point, I don't know how to adjust my speed or how much braking to apply to compensate for the error. While a nitpick, it's something I find really helps in reducing the learning curve and better understanding the handling and response of the cars.

For those that don't have several hours to commit to a race, but want the full experience of pitting and such, one can opt to use a "scaled" mode of play, setting the race length to a specific percentage of the actual event. You've also got the option to scale the wear and tear on the car, and enable or disable component failure. If you enable this scaling, you'll find your fuel use and tire wear reflects the length of the session, and you'll be required to make at least one pit stop during the course of the race. When it comes to pitting, I have to commend the developers on a very innovative idea. Instead of having static pit stops where you simply watch your crew to go work, Formula One CE displays a series of buttons that you have to press in order for a crewmember to work on an area of the car. The faster you press these buttons the quicker the crew completes the work, gaining you valuable seconds on the track.

Graphically, Formula One CE harnesses the power of the PS3 quite well. You'll fly around the circuit with trackside objects passing at speed, and the various car models are nicely detailed and quite realistic. The tracks themselves are modeled nicely; however the surrounding environments seem a little bland, with a few exceptions (the city environment as you take to the streets of Melbourne, for example). As you head out onto the track for a test session, you'll notice the glistening of the sunlight off the asphalt as it breaks through the early morning clouds, the various weather effects look spectacular. The damage model, albeit scaled back from what one would expect from a true simulation, is well presented. In a collision you can lose your tires, and often will see your wings and other components go flying through the air in a cloud of debris. Considering this level of detail, I was quite surprised at how well the game performed. Even with the dark skies and rain pounding down, water splashing around the track and creating a fine mist of spray in the air, and water droplets pounding against your windshield, the framerate was rock solid with no slowdowns whatsoever.

In contrast to the graphics, the sound in Formula One CE is a mixed bag. The high shrill of the engine as you push it to the extremes is bang on, and the collisions, tire squeals and skids sound authentic. The commentary and spotter on the other hand, are very limited, which really reinforces to the mediocre presentation of the game. At the end of every lap, the commentator gives a summary of who is at the front of the pack, or if an accident occurs then they will briefly mention which drivers were involved. In terms of your spotter, they'll pass along a note of trouble ahead, or comment on how well you are progressing through the field. This is pretty much the extent of the voice work you'll find in the game, extremely limited to say the least.

All in all, Formula One Championship Edition provides a good balance of arcade and simulation gameplay. While the rosters are a bit dated, and the presentation itself is incredibly bland, the actual racing experience is quite enjoyable. The game offers up enough modes of play to keep any racing enthusiast satisfied, and a decent multiplayer component for those who prefer to head online. Although Formula One CE has its flaws, it's worth taking a look for any racing fan who owns a PlayStation 3.