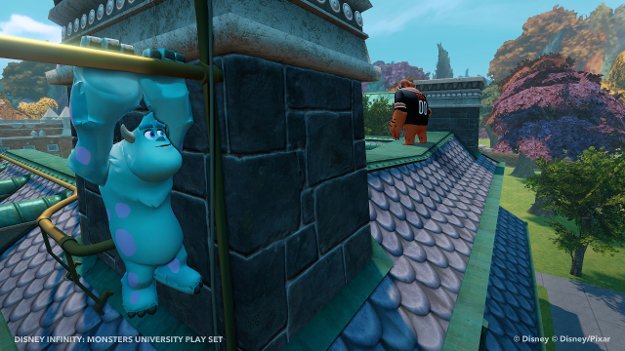 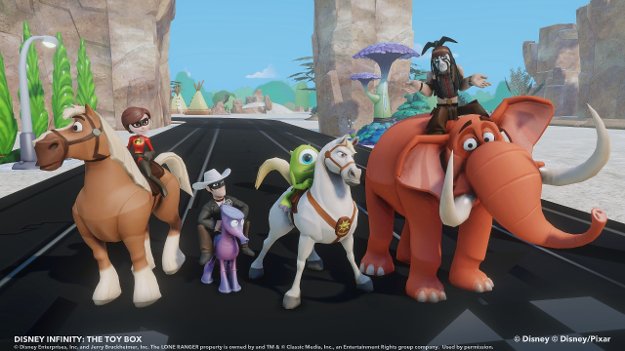 It's impossible to judge Disney Infinity in a vacuum, due to the power of the Disney brand and the looming juggernaut of Skylanders.  If you're reading this review, your main question probably isn't if Disney Infinity is a good game.  It's if it's good enough to justify a $75 starting investment, knowing this is just the start of an expensive habit.  This thoroughly depends on what you (and possibly your child) are looking for in the game.

If you're a Disney buff, then absolutely, don't hesitate.  You already bleed money for the Mouse, and you won't be disappointed at how your favorite Disney properties are represented here.  You probably didn't throw three hundred bucks at Skylanders, because it wasn't a Disney thing.  If you're a parent looking to buy something for your child, it's a trickier decision. 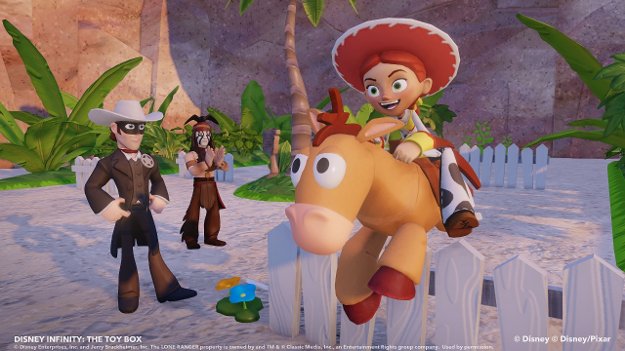 The ideal Infinity player is a slightly older child who isn't challenged by mobile apps or other kids' products, but is still too young for T- rated games.  They can whiz through the Lego games.  They're possibly spending time with their parent's copy of World of Warcraft even though they're younger than the official minimum age of 13.  While a huge part of Skylanders' appeal is that the core game is extremely easy, Disney Infinity's playsets and Toy Box Adventures are sandbox action-adventure experiences, providing samples of combo-based combat, stealth tactics, drift racing, and RPG style exploration.  I have to give Disney credit for not dumbing down too much to make the game universally “accessible”: when I was ten, my reaction time and hand-eye coordination was much better than it is now.

In the original Skylanders, the characters didn't even jump.  In Disney Infinity, they jump, roll, dodge, drive cars, fly hoverboards and helicopters, sail ships, throw bombs, and climb like caffeinated monkeys, so there's a much greater learning curve which is, fortunately, metered out gradually while introducing kids to somewhat more advanced gameplay experiences.  The Incredibles playset invokes games like Crackdown, and Infamous, with Batman's glide pack from Arkham City.  Pirates borrows from Assassin's Creed 3's naval combat.  Monsters University also has a stealth attack mechanic that's familiar to fans of that Ubisoft franchise – granted, without the gratuitous violence.  Each playset focuses on slightly different gameplay skills, like first person shooter-style aiming and combo-based combat.  Furthermore, like World of Warcraft, you never “win the game”: the world of a playset persists after you complete the story quests, after a brief victory cut scene.  It's a core gaming experience with a lighter touch, and the six-hour experiences don't overly tax a child's attention span while still giving them the sense that they've accomplished something.  You'll spend more than six hours in your favorite Playsets, however, just mucking around. Completing objectives isn't the core of the Disney Infinity experience.

I found this especially true in the Monsters University playset, where the greatest fun comes out of scaring random students and setting up joke booby traps for the comedic results... unfortunately it's also the most bug-riddled of the playsets, by far.  Pirates has a heavy focus on treasure and seeking out collectables at a more sedate pace, but the naval battles are pretty fun, and it's the prettiest environments of the three.  The Incredibles sets a much quicker pace, spawning hordes of enemies for kids to beat up, and plenty of winding streets to zoom through in the Incredicar.  Disney playtesting indicated that the children they were targeting didn't want to be told how to play the game so much as they wanted a more free form experience where they were in control.  The most obvious place where this comes into play is Infinity's centrepiece: Toy Box mode. 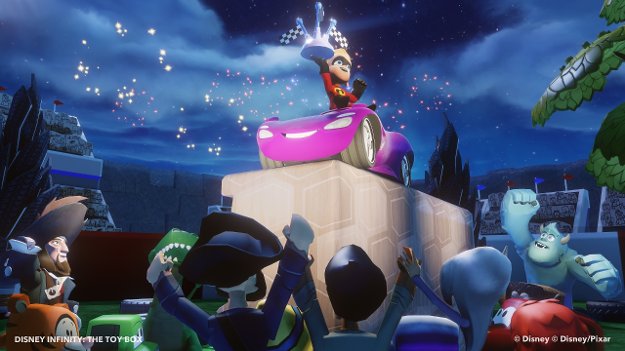 Toy Box mode is the creation center where you can build your own landscapes and populate them with friendly toys and enemies using items you unlock through playsets or spins.  Spins are an interesting semi-random XP reward system: actions like leveling up, and completing “Adventure” challenges earn you spins, which allow you to unlock new pieces for your Toy Box by randomly selecting a new toy from a grid which you can shuffle until you're happy with the selections.  I put my priority on the Muppet character pack and the Cave of Wonders from Aladdin, and if you bank enough spins, you can pretty much guarantee getting a certain piece. However, the spins where you don't get exactly what you want result in plants, grind rails, and terrain blocks that don't seem all that interesting, but are actually more practical than the dumb stuff I wanted because it was cute.  The editing tools are precise and fairly easy to use, but building an entire level takes hours, much like Minecraft or LittleBigPlanet.

At this point I was having fun, but I wasn't quite satisfied that Disney Infinity provided quite enough content in its starter pack to be worth the premium price.  Then I tried out the online features, most importantly the free additional content Disney releases on a regular basis to supplement the game.  There were a lot of battle races when I tried it out, but there was also an Alice in Wonderland inspired obstacle course maze that I immediately downloaded.  Obviously these additional maps aren't as complete experiences as the playsets, but they are elegantly beautiful and provide glimpses of parts of the Disney Universe that don't involve Pixar or Johnny Depp.  Furthermore, user-generated content is not system specific, therefore you can share a Toybox built on a PS3 with a friend on an Xbox 360.  It's this “system agnostic” free extra content that I feel justifies the extra cost, because it provides ongoing fresh experiences without buying anything more.  Since the real value comes from the ongoing content Disney provides, an internet connection is strongly recommended, even though it's not required.

I'd really like to see the third-party games industry moving in this crossover direction, because I'm tired of losing out on multiplayer with my friends because we bought the same game on different systems.  That's a long shot though, and this is where I became torn on what numeric score to assign Disney Infinity.  It should be rewarded for the technological innovations and the quality all-ages environment.  However, the bugs can't be ignored,  Disney Infinity is one of those games that really defies a representative numeric score because it does innovate, but it could have used an extra month in the quality assurance department. 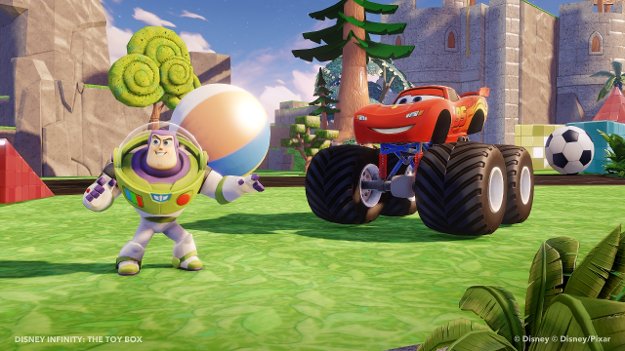 Getting back to that “extra cost” factor, here's the moment of truth: how much extra is an extra cost?    There are in-game teases to encourage you to buy more stuff, but Disney keeps it to a moderate level.  Unlike Skylanders, there are no parts of a map you need a specific figure to explore.  There are character-specific treasure boxes, but they unlock skins and packs related to that character, so it's only worth unlocking these boxes if you have an inherent interest in that character.   The only real forced upsell I saw was the co-op: you need two figures from the same playset to play those playsets split-screen co-op, although any two figures can play together in the Toy Box.  I understand this was more an internal creative decision than a shameless cash grab: Disney brass didn't want characters in worlds where they didn't belong.  Still, it's annoying.  This is only an issue with the starter pack playsets, however.  The ones sold separately come with two figures each, so this is a short term problem.

The thing is, there's no point in buying the starter pack if you expect to stop there.  The whole point of Infinity is to add on to the basics, earning those spins as you buy new playsets.  I'm already thinking I'll probably get Davey Jones, and the Lone Ranger playset, then Jack Skellington and Sorceror's Apprentice Mickey Mouse.  That's doubling the initial purchase price right there, and we're only at series 2.  If they branch into Star Wars and Marvel characters, I'm doomed.  At the same time, it's nice to have a persistent universe, and to be able to combine my favorite characters all in one hub.  It's a huge risk for Disney, but it's a risk for the right reasons.  Overall I think Disney Infinity will provide infinitely better value for the money than those horrible animated movie tie-in games, a concept which will get its first test on November 26th, when the movie Frozen is released alongside series 2 of the Infinity figures.  Keep in mind that if you're planning to make the jump to the PS4 or the Xbox One, you may want to wait and buy Disney Infinity for one of those next gen systems, because it looks like Disney is interested in a long-term consumer relationship with this concept.

There's no denying that, in the right hands, Disney Infinity is a lot of fun.  If you're not sure your kid will take to it, try out a friend's game, or see how little Bobby or Suzy responds to an in-store demo first.  Like any major investment you want to last for a while, you should really test drive it first... unless your kid is already utterly mad for the game, in which case, you won't be disappointed, although you will be poorer.  Like many Disney experiences, Disney Infinity might be expensive, but it provides value for that money.  They've created an empire on a series of premium products.  Back when Disneyland was built, many people didn't think anyone would pay that kind of money to go on rides, but Disney made it work. 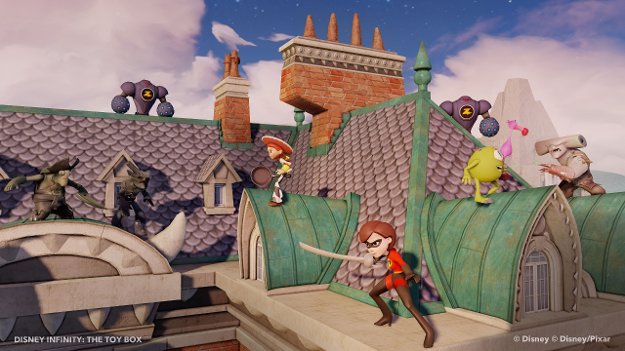 At the end of the day, it's this enduring appeal of Disney's various film and TV ventures that will give Disney Infinity its staying power.  Most importantly, anything that can encourage creativity and help preserve a kid's childhood even a little bit longer, before they start playing games that are violent and sexualized because they want a decent gameplay experience, is something I can support and recommend.  Childhood is too short, and Disney products appeal to people of all ages because we don't realize how precious creative play is until we're “too old” to do it.

Because there are so many gameplay modes in Disney Infinity, here are some more basic tips to get you started, especially with younger kids... especially if you're a parent without a ton of gaming experience: