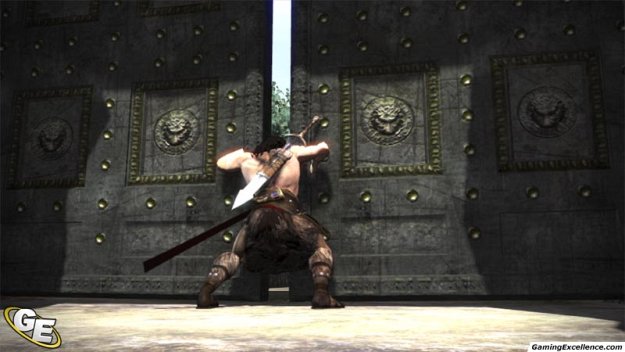 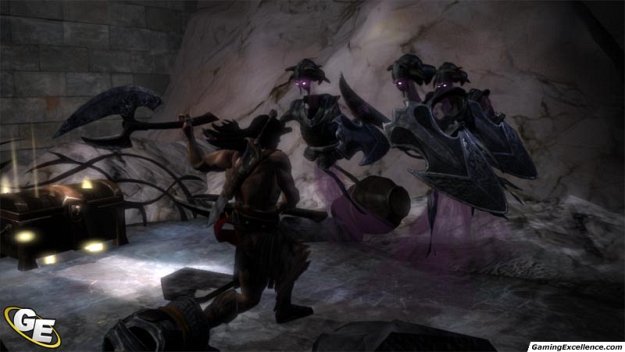 The legacy of Conan the Barbarian is a storied one. While the original Robert E. Howard novels about him are some of the best fantasy reads you will get your hands on, with the comics coming in close second, the video games with his name have been iffy at best. Let's not even get into the movies which started off fairly interesting but the second one got far to kiddy oriented to do any real favors to the Conan legacy. This game seemed as if it could set at least some of that right by bringing the Cimmerian warrior to homes everywhere. While it carries the setting of the original novels with it the gameplay itself doesn't live up to the setting.

Conan itself follows the brave Cimmerian on his trek to stop the dark wizard Graven from destroying the world. It seems that Conan accidentally set the wizard free while he was looking for some treasure and it is now up to him to stop him. To do so he is going to need the five pieces of his armor, apparently magic armor at that, to have the power required to stop this madman. At his side is a brave female warrior named A'Kanna who is also seeking the pieces of your armor, hoping to stop Graven in revenge for destroying her homeland. So the story isn't exactly the Iliad but the setting itself feels just right and helps me forget about the abomination that was the second Conan movie.

On your quest to destroy Grave you will find yourself traveling to a wide variety of locales and killing the natives. This makes up the largest part of the game and it is the most fun. As Conan you will explore these lands and using a wide variety of weapons, and methods, to take out your foes who can range from pirates to soldiers, mountain lions or even ethereal wraith-like creatures. This game doesn't lack any variety in this regard.

The problem is that you might as well call this Crom of War, after Conan's favored God, due to the fact that it literally feels like somebody copied and pasted God of War mechanics wholesale into this game. You have one button for rapid attacks, one for heavy attacks and one for grapple attacks and you pull off combos by stringing these three buttons together. Add in the four magic spells, something Conan would never have touched in the novels, and the three rune varieties that you use to power yourself and you have God of War's bastard child. Why they felt the need to do this so blatantly is beyond me.

However that isn't to say that the game doesn't do original things. While the basic systems are God of War based the differences come once you start fighting. Whereas many other games of this genre encourage button mashing that is a sure fire way to get you killed here. Knowing when the mash out combos on your enemies and when you have to be defensive are key. There is an interesting parry system implemented, where blocking an attack at just the right moment allows you the chance to perform an instant kill counterattack. Knowing when to switch between these combat options are key.

More important than that is the three weapon based systems. Conan can either fight enemies using one weapon, two weapons at once or by wielding one two-handed weapon. Each fighting style has its own benefits and times that they are most useful. Dual weapons are great for fighting off basic enemies but it is useless against those with shields while two handed weapons excel at breaking blocks but get the attacks get interrupted by faster enemies frequently. However each is not so limited as to force you to use it at any point. I preferred single weapon and two-handed weapon styles over dual wielding and I found few situations where I felt that I needed to dual wield. What makes this system so intriguing is that you can literally go into a fight with one sword, pick up a shield, throw it at a foe to kill him and pick up his sword to go dual wielding on new enemies.

Considering that we are at a gaming generation where the consoles are doing such amazing things one is left to wonder why this game has so many graphical and sound glitches. It is a source of amazement and much frustrating that these are so plentiful.

Character models and backgrounds all look rather fantastic. When you are swinging your sword the blood flows rather appropriately and limbs will go all over the place. It all looks rather impressive while you are playing. Even the topless women who act like strippers when rescued look good, although I have to say that calling these women maidens is laughable. However while playing you will notice that weapons frequently get caught in mid-air when an enemy loses his grip on it, or dies, and that enemies themselves will get caught in walls and just hang there. Another gripe is that there is a rather gruesome scene where Conan cuts his way out of a creature he was inside of. For some reason he comes out without a drop of blood on him but blood squirts off his body like his hair was a water fountain. It looks odd to say the least. While the game does look good at first glance it is lacking in the polish that one might have expected.

To put it in terms Conan might use "By Crom the sound is horrible in this game." Ron Perelman, a normally excellent actor, puts in a lackluster and ill fitting performance as the Barbarian himself. Almost all the other characters sound passable in the least but it hurts to have the main character sound so bad. His one liners are especially painful. While the music itself is fairly good it is rather depressing to hear it constantly cutting out and getting choppy. There were many instances where cut scenes had no sound and had to be reloaded to get them and voices would typically start stuttering and messing up after about two to three hours of play.

Possibly the biggest problem with this game, more than the bad sound and graphical glitches, are the boss fights. Taking a hint from role-playing games the developers stuck to the belief that the more powerful a boss is the more forms he has. To this end you will end up fighting almost every boss a minimum of two times in short order with the final boss clocking in with no less than three life bars and four button press mini-games to break it up. The games loves it these button press cut scenes and by the time you are done playing you likely will not be too fond of them. While the ones for opening doors or pathways are fine, the boss fight ones go on for far too long in some cases.

While you could do much worse than picking up Conan, there are also better games out there. Since it clocks in at only six hours for a first play through the game barely lasts long enough to whet your video gaming whistle before it is over. If the obnoxious boss fights don't put you off then maybe you might desire to own it. While Conan is still a decent game, it's likely better off as a rental.