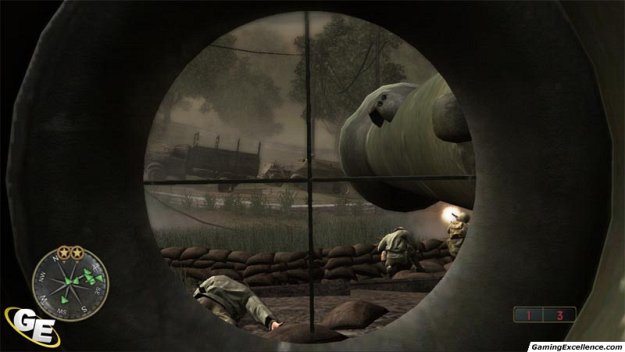 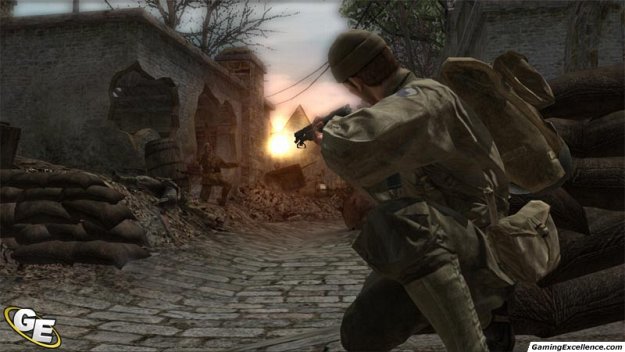 Passing on a series like Call of Duty to a fellow developer must be like losing a baby to some, especially when you've seen it grow to romp in a successful manner. Treyarch took Call of Duty with 'Big Red One', and has continued since to bring us this magnificent sequel.

Warping sixty-two years back you plant foot in what is known as "The Normandy Breakout." Playing as a soldier from each ally, you're included in on the perspective from the Canadian, U.S., and British forces, dropping behind the German lines to support the Maquis (French) and Polish tank crews in an attempt to close the Falaise Gap. Aside from stereotypical names to distinguish a bit of structure in nationality, your character is pretty much nonexistent, as you will not see yourself or talk throughout the campaign. Levels are objective based as usual, with a compass telling you where to go. Each mission will obviously be a little different in pace, as each ally is attempting a separate maneuver; for example, the Canadian and U.S. forces will assault, capture, and hold facilities and towns whilst the British and Marquis sabotage German supply lines, and the Polish tankers battle German Panzers.

The campaign obviously opens with a training mission, and learning the controls won't be hard if you're used to Call of Duty 2 as they haven't changed. Firing is done with the right trigger, but you'll be aiming down the barrel with the left trigger a lot more than not. You can perform a melee attack by pressing in the right stick, clicking in the left stick brings up your binoculars. You can toss smoke grenades to create cover and frag grenades to ensue awesomeness. If a grenade is tossed by your side, you have the chance to pick it up a throw it back quickly. To prevent your own frags from being returned, you can "cook" a grenade by holding the right bumper. Don't cook it too long or your pretty much worm food. As this isn't a fun thing to do, make sure to keep an eye on how blurry and blood shot your screen is, as this is your only onscreen indicator to how badly you're getting owned. Healing is as simple as finding cover. After the training is complete, you hop in the back of a truck and ride straight into the fight. When you get blown out of the truck, you'll find yourself in the middle of yet another unforgettable gunfight produced by COD series. Bullets and grenades aplenty, flying through the air and leaving soldiers to get to whatever cover they can find. With the amount of detail that has gone into COD3, this isn't very hard, as you will always have something to jump behind. Bodies will become strewn right before your very eyes as you do advance. As you move along to later levels, you'll see yourself climbing into tanks and jeeps, using mortars, missile launchers and sniper rifles. Not only will you use tanks, but you get to call air support and watch the battlefield explode in flurry of fire.

I would say COD 3 is more so a run-and-gun FPS than anything else, especially on anything other than the veteran difficulty. Fighting alongside some decent A.I. and needing to stay stick behind cover at certain intervals does vouch for its variability, but for the most part you can still just run up and kick some serious Nazi butt. There are sections in the game (like in COD2) that you cannot clear by simply killing all of the enemies, so be sure to keep in mind that you must continue to watch your compass. If it's telling you that you need to clear a house at the end of the field, advance to the house as enemies may continue to re-spawn in the field until you do so. As in COD2, you need to be careful with friendly fire. COD3 is much more forgiving this time around, ordering players that are immediately surrounding you to move if the trigger is pulled in their direction, but the mission will come to an abrupt end if you decide to blow up the annoying little French man by "accident". As you can simply run up in many cases, COD 3 isn't terribly difficult on the normal setting, nor will it take you long to complete, clocking in at about eight hours, give or take. COD veterans will want to change the difficulty over to the hard or veteran settings, as doing so results in much more intense play, giving you about three shots to survive on in veteran.

Treyarch has tweaked the gameplay in a couple regions, adding a couple of neat features that keeps things realistic and fresh. The best of the additions has to be the close-quarters combat. Although they are clearly scripted, they will still take you by surprise, having an attacker jump at you through a doorway in an attempt to stab you to smithereens. The combat sequence is completed by alternating on the triggers to ward the enemy off, and then pressing a letter button to finish the job. Also, rather than having a "bomb" button to plant a bomb, you'll need to follow the on screen button combination, rotating the analog stick a few times to insert the fuse, and so on. The first time this happens, it seems well done, but the more you do it the more you will realize that the mechanics are just plain boring. As aforementioned, there are a few missions that place you in the driver's seat of a jeep, and it's your job to follow the checkpoints and avoid enemy fire. I found the driving physics to be great for a title like COD3, and it made a great mix to the gameplay, as all the driving missions were quite exciting. The tanks themselves are a little difficult at first, but once you get the hang of them, it's a blast. It's a tank! How could it not be?

In addition to the single player campaign, COD 3 features a wide selection of multiplayer modes for up to twenty-four players to participate in on the Xbox 360, sixteen on the PlayStation 3. On the 360, that's over three times the limit of players on Call of Duty 2, a vast improvement for COD and impressive as a console title altogether. Although, as a Canadian I'm disappointed to report that all allied forces, these being Canadian, British, and Polish, are not playable in multiplayer. I had some serious problems connecting to games as well, only being able to make my own and have others join in. The Wii version of COD 3 does not feature a multiplayer option at all. On Xbox 360, you can select from Player and Ranked matches. Ranked matches track standings based on your performance and unlock achievement points, the latter (Player) is simply free play. There are six games in total, including Battle, which is a traditional death match, both individual and team. Thirdly you have War, which pits teams against each other for flag control. Control all three to five flags, and you win. You also have a standard Capture the Flag, both single and team. And the final game is entitled Headquarters. In HQ, a radio spawns at a random location, and the goal is to possess the radio. Once you do so, you establish a base at that location, defending it from the other team.

Previous installments would get players to select a team and weapon, whilst COD3 seems to pull one from Battlefield 2 book, wherein the players now select a class of soldier and a team, the chosen class thus defining both the weaponry and the abilities that he or she will be allowed to execute. The assault classes have sticky bombs and smoke grenades, riflemen can use rifle grenades and scouts can call in artillery. There is also the medic, support, and Anti-Armor classes to choose from.

COD 3's most prominent feature is probably its visuals, spectacular at the least, models and effects and all. Significantly improved from COD 2, the detail is simply sadistic. Every environment you encounter will simply put you in the game as you run past the bushes, long grass, boulders, debris, and large trees. The textures on all of these items, as well as the models running beside you, are an area of the game that have been vastly improved. It's hard to take it all in when the object is to eliminate everything that moves in front of you, but every little detail is there, and the cutscenes will prove it. Either in play or otherwise, you'll see the texture of the clothing, the mesh on the helmets, the rain falling to the floor and collecting in puddles, the airplanes and birds overhead, or the bullet holes and grenade debris under your feet. COD3 sports some impressive effects, including depth perception when you look down the barrel of the gun, focusing in and out of what's in view. Throwing a smoke grenade results in a thick cloud of smoke so dense and so realistic you'll sometimes find yourself squinting in an effort to see the enemies and their gunfire as they advance in the created cover too. The explosions I didn't find very impressive, comparing to such games as Saints Row and Lost Planet, but they were decent none-the-less. On the 360, the framerate is pretty stable; however the PS3 version does have some framerate issues. Overall the game performs very well.

The series has continued sounding great, but hook your console up to surround-sound and you will simply reach climax. The game sounds phenomenal. You'll hear bullets, yells, and explosions coming from all directions, rattling your games right off the stand. Fellow soldiers will direct you to the next checkpoint if bother to listen, and listening to Nazi soldiers will let you know their tactics as well. Joel Goldsmith has done some writing for the score of COD3, giving it that amazing orchestral soundtrack that elevates the game play in so many ways. The professionalism in this area of video games is getting pretty nuts these days.

From landing to conquering, the COD3 experience is a great one, and we'd suggest any fan of the series or even of the genre to check it out. The visuals are mind-blowing and the sound is simply incredible, especially with the score it has. The gameplay hasn't changed much and may get dry for those who are hardcore followers to the series, but veteran mode will be a sure bet to blow blood-vessels for any player. The additions to the multiplayer scene add replay value but you may want to borrow or rent a copy first to see if you have any connection problems. COD3 is a keeper, and definitely worth a look.