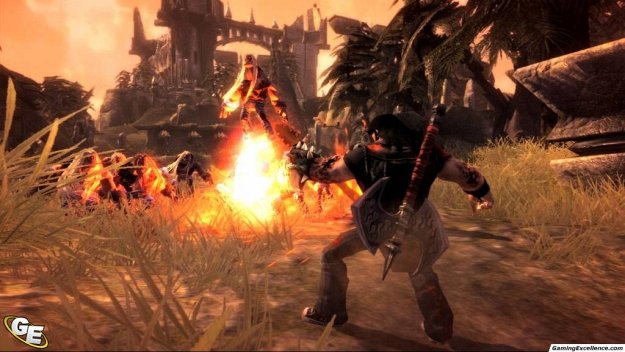 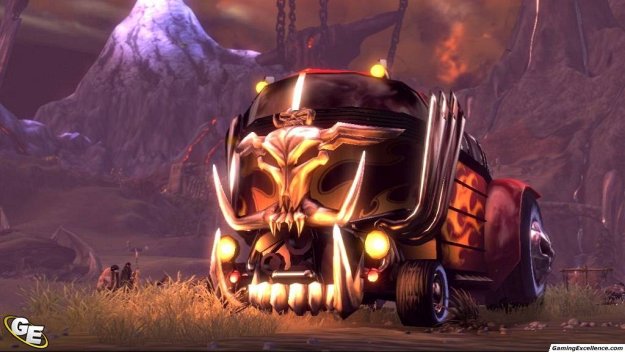 I was so stoked when I was offered the chance to review Brutal Legend. I love Jack Black. I love metal music. Unfortunately I don't love this game. The schizophrenic gameplay modes and interface issues within those modes leads to an uneven interactive experience that feels a mile wide and an inch deep. Like heavy metal music, it's way over the top; when it works, it's fantastic, but when it doesn't it's like fingernails on a blackboard during a dude's first night in prison.

Brutal Legend tries to do way too much. In doing so, it doesn't do anything really well. Like the dudes in Spinal Tap, Tim Schafer and his team at Double Fine tried to go to eleven and ended up with an eighteen inch tall model of Stonehenge. You can see the seeds of something potentially great, which is what makes its spasmodic mediocrity a giant kick in the ass. It comes roaring out of the gate with it's opening scene: the noble, hardworking roadie Eddie Riggs is stuck working on a tour for this faux metal emo band who have tons of attitude and no brains. There's even a reference to their tween demographic. After sacrificing himself to save one of the little tools, he is transported to an alternate metal fantasy history via his massive belt buckle: it's actually an amulet of the fire beast Ormagoden.

The early levels introducing Eddie's melee weapons - a giant axe and a guitar named "Clementine" - and his chick magnet car, the Druid Plough, are fantastic. They're funny as hell, the female characters aren't annoying, and the character designs are good… if a little cartoony for an M-Rated title. And it's definitely an M-Rated title: even with the swear filter on and the bloody decapitations turned off, there's too much bondage gear for this game to be suitable for younger players.

But I'm not a younger player, so an hour into the game, I was having a great time. At that point, however, it was a standard adventure title, and that was all I really needed it to be. Ozzie Osbourne is the Guardian of Metal, and there are very subtle homoerotic tendencies to Lars, the leader of the resistance to Emperor Doviculus. Lars is something of a Bon Jovi clone who's very concerned about his hair and his waistline, and has a history with Lionwhyte, a villain who uses his hair to fly and looks like a cross between Dee Snyder, David Bowie, and Mystique from Jem and the Holograms.

While I was helping the gang free the Headbangers - basic infantry units with seriously overdeveloped neck muscles, I was laughing out loud in places. But after these things become more and more of an RPG with side quests and character level ups. Okay, I can deal. That's not unheard of. The side quests, however, are terribly repetitive, offer next to no challenge, and the comedy takes a nosedive. You can get your car stuck somewhere away from the action very early in to one of these side quest scenarios, spin your wheels uselessly for huge chunks of time, and still emerge victorious. It's terribly unsatisfying.

Still, I'm somewhat used to games having placeholder elements for later downloadable content. I was willing to give that a pass. Like I said, I was predisposed to liking Brutal Legend, and I was going to hang on to that for as long as I could.

But then the game became more of an ill-conceived real-time strategy thing for a terribly out-of-place multiplayer mode. I love RTS games, but this is a terrible RTS. There's no area map, no real overhead view, you can only command your troops when you're close to them without performing a guitar solo combo, and most of your units are near useless in the campaign battles. While I was intrigued by Supreme bad guy Doviculus' army because of the way the troop hierarchy worked, there's no way I would spend any time on multiplayer outside of the purposes of this review, because a bad console RTS is grounds for justifiable homicide, as well as an excuse to cry into one's beer.

If that's what made me cry about the game, what made me hurl were the escort duty driving levels where you're shooting without a reticule and your secondary weapons are next to useless. Target lock on the heat seeking missiles was iffy. And some jerkwad level designer thought it was a great idea to put patches of brush or fence near the middle of the road, so you get hung up on them while trying to aim without a crosshair at bouncy grim reaper ghost goats while zooming through forests in the dark. The only thing that stopped me from throwing my controller through my TV in a blinding animal rage was the three glasses of cabernet sauvignon I chugged through in desperation. I have a phenomenally high completion rate on games, but I would have quit Brutal Legend at about the 35% mark had I not been reviewing it.

Unless you're a fan of RTSs, RPGs, action/adventure games, and driving games there's going to be something in this that royally pisses you off. Then again, I am a fan of all those genres, and it still drove me to drink. Brutal Legend really needed to pick its gameplay battles more wisely, because not one of its play modes feels fully developed. By the midpoint of the campaign it's a mess of cheap deaths and cheap victories, without clear objective instructions, and explanations that are too reliant on gamer jargon. A metalhead buying this game because he likes Jack Black and Black Sabbath isn't going to know what the hell buffs and debuffs are.

A mangle of genres, therefore, is further mangled by the title trying to be a casual/hardcore hybrid.

Granting Brutal Legend a numeric score is difficult because it's so uneven. At its best it tops out at near a 9. At its worst it glitches and requires a restart. For metal fans there is a thrill at the great soundtrack that includes some awesome newer stuff like Dethklok's Murmaider, as well as a good mix of classics and some Guitar Hero gimmes like Dragonforce. Furthermore, the number of musicians with serious cred who did voice work for the game is astounding. It would have been a fantastic film, but as an interactive experience, it isn't ready for the main stage. The tragic thing is that with some fine tuning and more mid-game jokes it could have been great.